Technology has invaded nearly every aspect of life: our cars are beginning to drive themselves and an app on your phone can turn the air conditioner on in your house at the push of a button, no matter how far away you are. And just as technology has brought many conveniences to our simple daily tasks, it has also changed how we fight wars. 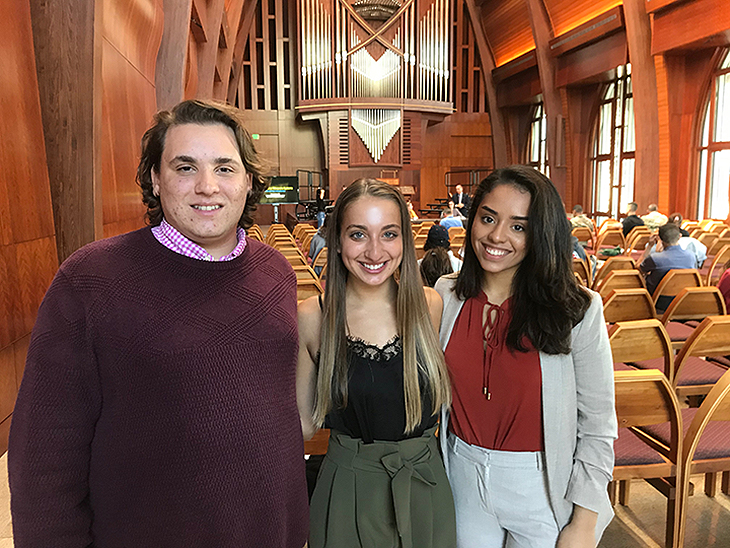 From left Joseph Cappuccilli ’21, Tiffany Maziarz ’21 and Catherine Reveco ’21 have been working alongside the American Red Cross as members of its International Humanitarian Law Youth Action Campaign. Photo by Mallory Culhane '21

Catherine Reveco ’21, Tiffany Maziarz ’21 and Joseph Cappuccilli ’21 have been working alongside the American Red Cross as members of its International Humanitarian Law Youth Action Campaign. Throughout the fall semester, the team researched the use of autonomous weapons (like drones and robots) in warfare today as it relates to international humanitarian law, which is a set of rules aimed to limit the effects of armed conflict.

The technology of autonomous weapons has created a significant ethical discussion in the U.S. as the weapons help decrease the number of soldiers entering dangerous areas, but the technology is able to independently search and engage targets through an algorithm, possibly putting the lives of more civilians at risk.

The goal of the team’s research was to design and implement a public health campaign, which they manifested through a symposium on Dec. 4. The conference included panelists Marcus Arvan, UT associate professor of philosophy; Esme Aston, program officer for the American Red Cross; Abigail Blanco, UT assistant professor of economics; and Col. J. Stephan, a U.S. military veteran.

“We decided on doing a panel, because it’s a way to spread awareness to college kids,” said Cappuccilli, who wanted to reach more people and provide a more in-depth discussion than a traditional information table on campus would allow. “It also gave us the opportunity to look at it from philosophy and public health angles,” as well through the lens of ethics and military studies.

“The topic is so diverse,” said Reveco, explaining the overall goal of the research was to start a conversation and bring light to the topic. “Our main focus was to educate, not advocate for a particular side. We wanted to see all viewpoints.” 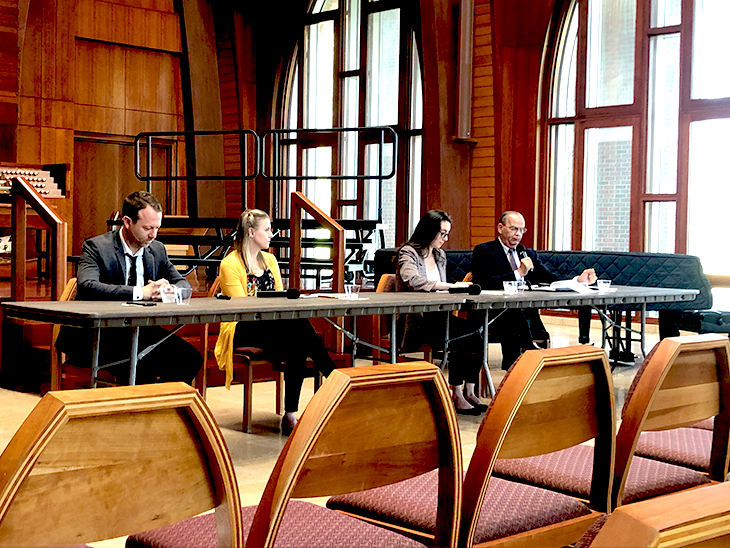 The goal of the team’s research was to design and implement a public health campaign, which they manifested through a symposium on Dec. 4. The conference included panelists (from left) Marcus Arvan, UT associate professor of philosophy; Abigail Blanco, UT assistant professor of economics; Esme Aston, program officer for the American Red Cross; and Col. J. Stephan, a U.S. military veteran. Photo by Mallory Culhane '21

The students were collaborating with the Red Cross through UT’s Applied Learning Experience (ALEX) internship. Coordinated through a partnership between UT’s Office of Undergraduate Research and Inquiry and Career Services, ALEX is designed to solve issues for a local organization while offering opportunities for students to apply their knowledge to real-world scenarios through multidisciplinary teamwork. The program is open to juniors and seniors who apply for the internship via Handshake.

The ALEX team were each drawn to the Red Cross project for different reason. Reveco, who is a member of UT’s ROTC Spartan Battalion, said the research would make her better prepared for encountering the technology as a future leader in the military. Maziarz aspires to be a lawyer and wants to be well versed in ethics and humanitarian law. Cappuccilli had previously taken courses with Arvan, so it was an opportunity to work together and utilize the skills and background he had already gained from his academic studies.

Reveco, a public health major, was in charge of contacting and organizing panelists. Maziarz, double major in sociology and philosophy, was responsible for setting up the location, advertising and social media presence, and getting the symposium associated with the honors program at UT. Cappuccilli, a double major in philosophy and economics, was responsible for working and coordinating with the Red Cross.

The unique aspect of the ALEX program is that students do a majority of the work and faculty members are there to supervise and guide students in the right direction, rather than be directly involved. Arvan and Tracy Zontek, associate professor of health sciences and human performance, oversaw the team’s efforts.

“The program is designed…with relatively minimal faculty interaction,” said Arvan. “They’re really doing most of the hard work themselves.

Though each had a specific role, they all have similar takeaways from this experience: a unique collaboration skill to work with others in a different discipline.

The team also has the opportunity to participate in an international humanitarian law summit in Washington, D.C. in the future. They plan to continue with online engagement around the issue to be eligible to attend the summit.