From internships to student achievements to recognition of The University of Tampa faculty and institution as a whole, the following is a running archive of UT press releases, called News Articles, and feature stories, noted as UT Life.

The University of Tampa’s 2016-2017 PNC Bank Concert Artist Series at the Sykes Chapel and Center for Faith and Values resumes Sunday, Feb. 5, with Raymond and Elizabeth Chenault, who were named "the world's premiere duo-organ team" by The Atlanta Journal-Constitution. The concert begins at 2 p.m. and is free and open to the public.

On Thursday, Feb. 2, The University of Tampa will welcome John B. West, chairman of Hire Velocity, and Dan Ciprari, CEO and co-founder of Pointivo, as part of the Sykes Hall of Fame Business Speaker Series. This event is free and open to the public, but seating is limited and registration is required.

Rashid Gargash ’17 doesn’t have a child of his own, but he is familiar with how dangerous a hot car can be to a child or pet left inside. Gargash is from Dubai, a place where summer temperatures easily exceed 110 degrees Fahrenheit.

“It’s an issue there, just like in the U.S.,” said Gargash. The average annual number of heatstroke deaths of children in cars is 37, according to research at NoHeatStroke.org.

It’s why he spent his winter break back home, working. Gargash is part of a team that has developed a device to prevent hot car deaths. Their product, Sense A Life, is a small sensor placed on a car seat that is activated when the vehicle door opens, alerting the driver with an audible sound and, if ignored, through a mobile phone application. 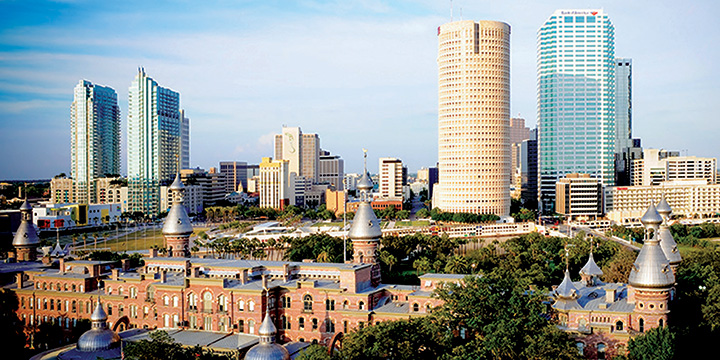 UT Honors Program Announces Spring 2017 Symposia Series
News
The University of Tampa’s Spring 2017 Honors Program symposia series kicks off on Wednesday, Jan. 25, with a presentation by Heather Masonjones, professor of biology, and Emily Rose, visiting assistant professor of biology. Their talk, titled “Secrets of the Sweetings-Pond Seahorse,” begins at 4 p.m. in the Trustees Board Room on the ninth floor of the Vaughn Center.

Throughout the series, resident scholars and researchers at the University as well as guest speakers will present in their areas of specialization. Guest speakers in the series include Dan Walden, associate professor of English at Baylor University; Steph Ching and Ellen Martinez, directors of the documentary film After Spring; and Terri Muuss, a writer and performer whose one-woman show, Anatomy of a Doll, was named Best Theatre: Critics’ Pick of the Week by New York Daily News.

UT Presents Electronics Alive IX Jan. 24–March 3
News
From Jan. 24–March 3, The University of Tampa’s Scarfone/Hartley Gallery will showcase the work of established and upcoming artists in the ever-evolving realm of digital art at Electronics Alive IX. This biennial invitational exhibition features experimental computer animations, interactive digital work and virtual spaces by digital artists from around the world. There will be an opening reception on Friday, Feb. 3, from 7–9 p.m.
Prev ... 3 4 5 6 7 8 9 10 Next
Select a Category