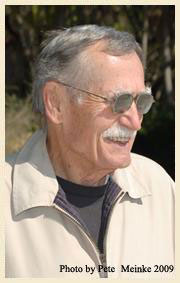 Peter Meinke has published seven books of poems in the prestigious Pitt Poetry Series, the most recent being The Contracted World: New & More Selected Poems (2006). His book of short stories, The Piano Tuner (U. of Georgia Press, 1986) received the Flannery O’Connor Award; his second, Unheard Music, was published in 2007 by Jefferson Press, which also reprinted his book about writing, The Shape of Poetry (2008). In addition, he has published two children’s books, a monograph on the poet Howard Nemerov, and seven poetry chapbooks; a bilingual collection of poems, Maples and Orange Trees, was published in St. Petersburg, Russia, in 2005.

His work has appeared in Poetry, The Atlantic, The New Republic, The New Yorker and dozens of literary magazines; and has received numerous awards, including two NEA Fellowships, three prizes from the Poetry Society of America, two O’Henry Awards and many others. He directed the Writing Workshop at Eckerd College for several decades, taking early retirement in 1993. Before and since then, he has been writer-in-residence at Hamilton College, Davidson College, the University of Hawaii, the University of North Carolina in Greensboro, Old Dominion University, Wichita State University and other schools. In 2009, he was appointed the first Poet Laureate of St. Petersburg, Florida, where he has lived with his wife, the artist Jeanne Clark, since 1966.