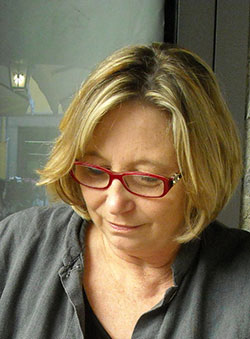 Barbara Ras is the author of the poetry collections Bite Every Sorrow (LSU Press, 1998), chosen by C. K. Williams to receive the 1997 Walt Whitman Award and also awarded the Kate Tufts Discovery Award, One Hidden Stuff (Penguin, 2006), and The Last Skin (Penguin, 2010), which won the 2011 Award for Poetry from the Texas Institute of Letters. Ras has received fellowships from the John Simon Guggenheim Memorial Foundation, the International Writing Program at the University of Iowa, the Rockefeller Foundation, the Artist Foundation of San Antonio and Bread Loaf Writers’ Conference.

Her poems have appeared in the New Yorker, TriQuarterly, American Scholar, Massachusetts Review, Orion as well as many other magazines and anthologies.  She is the editor of a collection of short fiction in translation, Costa Rica: A Traveler’s Literary Companion (Whereabouts Press, 1994).

She has taught at writers’ conferences across the country and has been on the faculty of the MFA Program for Writers at Warren Wilson College.