Team Teaching at Its Best

The newly revamped Honors Program features courses taught by not one, not two but three professors from three different disciplines – at the same time. 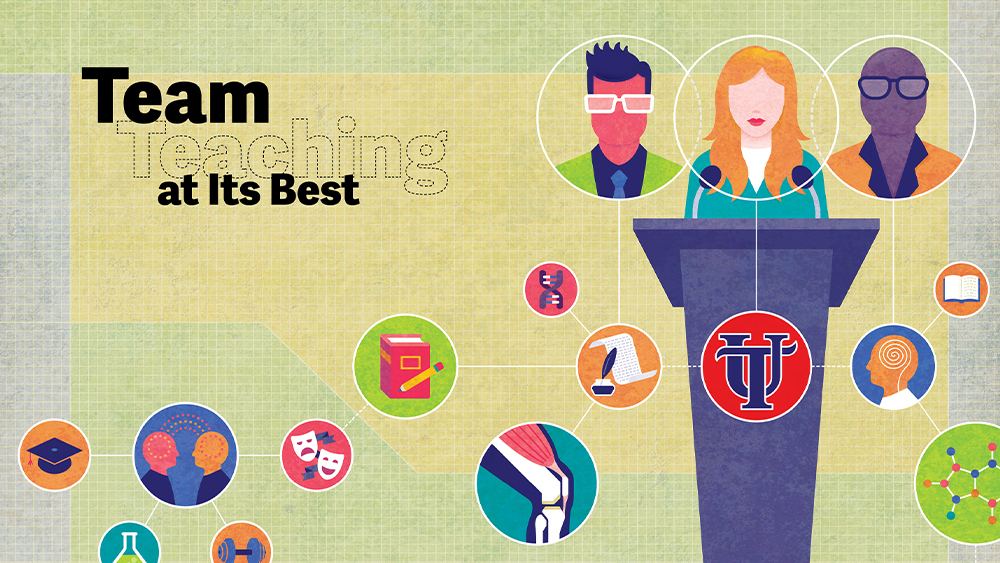 As she presents a lesson to the few dozen honors students sitting in front of her on a September afternoon in East Walker Hall, Erin Koterba, associate professor of psychology, has their full attention.

“We would see a history of eugenics, which is sterilization,” she says. “What was the label for that again, Dr. Miller?”

“Negative selection,” one of her two co-professors — Abraham Miller, associate professor of health sciences and human performance — calls out from the back row. “Yes, thank you,” says Koterba. “It means getting rid of a trait so we can’t pass it on biologically. Some of our disorders and disabilities are heritable, but does that mean 100% that you’ll pass it on? No, of course not. So that way of thinking? Yikes.”

“Another thing we’d do,” Koterba continues, “and this is more for people with intellectual disabilities, is institutionalization — we’d put them in a home. And do you think the homes were nice places to live? No. So worldwide, we don’t see institutionalization happening very often anymore,” says Koterba.

Student Zaina Jouejati ’23 chimes in: “I learned about this in high school. We read this short story about postpartum depression called Yellow...”

“—The Yellow Wallpaper? You don’t know how close I came to assigning that to you!” says the third co-professor, Amy Elliot, assistant teaching professor of English and Writing, who is leaning against a classroom wall.

This riveting, intellectual game of Ping-Pong is a discussion from a class called “Where Have We Been? Controversies in Human Development” from UT’s newly redesigned Honors Program that launched this fall semester.

“Honestly, at first, I was intimidated by being taught by three teachers, but right after the first class, I knew it was going to be an amazing experience,” says Jouejati. “The team teaching makes the topic more understandable and helps connect the dots of each controversy discussed. Dr. Miller, Dr. Koterba and Dr. Elliot bring a fun and open atmosphere into the classroom, making it easier to learn.”

TAKING THE CURRICULUM TO THE NEXT LEVEL

In the past, an honors class was a more challenging version of a baccalaureate or “gen ed” class. One of the goals of the new program was to create an original honors curriculum. This was no small task, as it had to be approved by the Southern Association of Colleges and Schools Commission on Colleges (SACSCOC), the accrediting body.

While you’ll find the “fundamentum” courses in the baccalaureate program, the idea labs, dialectics and thesis requirement are all unique to the Honors Program, and they’re all writing- and research-intensive.

Another change to the program is that faculty who teach honors courses are now called “fellows” and need to apply to teach in the program. Fellows are selected by the honors committee, a faculty senate committee. Each fellow commits to teaching once every other year. There are 26 fellows at the moment, and that number will grow along with the program as new cohorts join each year.

EASY AS ONE, TWO, THREE

“What makes our program particularly innovative — and also very challenging — is that most team-taught courses at other universities have just two faculty. They’ll bring in somebody from math and somebody from art and then they’ll talk about the math behind the art,” says Cragun. “We put ours on steroids and said, ah, two isn’t enough. Let’s make it really complicated for everybody. We’re going to put three faculty in there, which is awesome.”

The logistics of scheduling those classes were, well, less awesome. But it was worth the effort.

“Fellows are ‘borrowed’ from various departments and often have existing teaching obligations. They are usually busy and heavily involved in their own departments, which means asking for a lot of goodwill across the colleges,” says Tillman. “But we have been fortunate in that the deans and chairs have supported our endeavors and care deeply about the students. They have been very collaborative and helpful when it comes to creating the vision for this curriculum.”

When all three faculty are in the same classroom, listening intently, they are able to instantly jump in and out of the lesson when appropriate, which leads to a dynamic learning environment.

“We actually want the professors to disagree sometimes – not angrily disagree, but it might be, ‘In our discipline, we think about this a little differently,’” says Cragun. “We want to show students: Experts don’t always agree.” 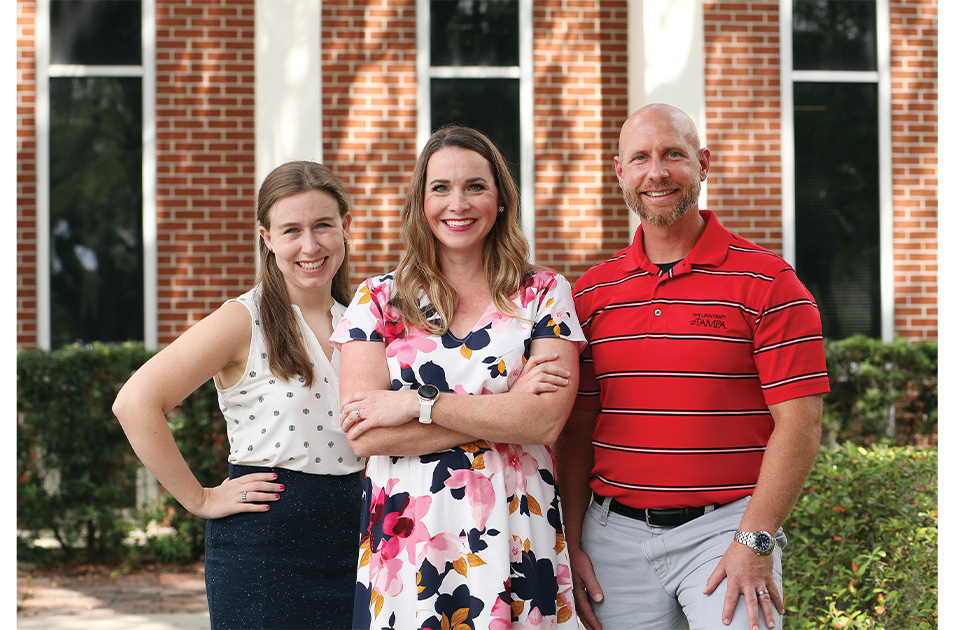 About 1,000 first-year students (who had at least a 3.7 high school GPA) qualified for the UT Honors Program this fall, and in order to continue in the program as sophomores and beyond, they need to maintain a 3.5 GPA, earn “ACE points” by going to honors events and reapply at the end of the academic year.

Cragun and Tillman estimate that only about one-third of those students will choose to continue after the first year, so the program will likely become more intimate as it goes on. “One of the things that Kacy and I decided early on was that we were going to shrink the Honors Program because we wanted this to be a core of high-achieving students who are all engaged,” says Cragun.

Some Honors Program events — such as this past October’s “Coffee Conversation: How are AI and Automation Changing Material and Drug Discovery?” with Ashley Longstreet, assistant professor of chemistry — take place in the McKay Hall community room. Talk about convenient.

You’ll also find honors students socializing at the beginning-of-the-year party with food, a DJ and lawn games. An honors executive council made up of students puts together other fun activities on and off campus that further that sense of community.

PREPARING STUDENTS FOR THE FUTURE

For students who are considering taking the honors route and going down this harder path, there are incentives. For one thing, they earn a distinction on their diploma, saying they graduated with honors.

Another perk is being eligible for funding to attend conferences, as well as perform research (both here and abroad). One honors student each year earns the Timothy M. Smith Inspiration Through Exploration Award, which provides $2,500 for summer travel. For example, one student recently used the scholarship for a humpback whale research internship in Hervey Bay, Australia, where she assisted in a multi-million-dollar research project focused on marine mammal behavior.

Other students like the idea of leaving UT with a thesis, which they can mention in a graduate school application or bring to a job interview.

“Even if you’re not going to graduate school, to have some sort of original scholarship becomes a great showpiece to be able to say, ‘Look, I can work independently. I undertook this large project and you can see the outcome,’” says Cragun. “Some of them end up publishing their thesis in a peer-reviewed journal.”

One of them is an applied sociology and political science double major, Christina Pasca ’21, whose thesis “Knowledge and Perceptions of the Genetic Counseling Profession Among a National Cross-sectional Sample of U.S. Adults” was published in The Journal of Genetic Counseling this year.

“My honors thesis was the greatest learning experience I’ve had at UT,” says Pasca. “Having the final product published was very rewarding after putting so much time and effort into its creation.”

She is now applying to graduate school and hopes to earn a doctorate in psychology or social psychology.

“The Honors Program has given me so much,” says Pasca. “I’ve been able to travel to new places across the U.S. and present my work at conferences. I’ve gotten more out of it than I could have ever expected.”

This story first appeared in the Winter 2021* UT Journal.