One of Nneka Jones’ goals before she graduates in 2020 is to do a portrait of UT President Ronald Vaughn. Having just captured the emerging artist award at the Gasparilla Festival of the Arts, she might be one step closer to her goal.

“I’d like to have my artwork in the school. It’s on my bucket list,” said Jones, a fine arts major with a concentration in printmaking and painting and a minor in marketing. 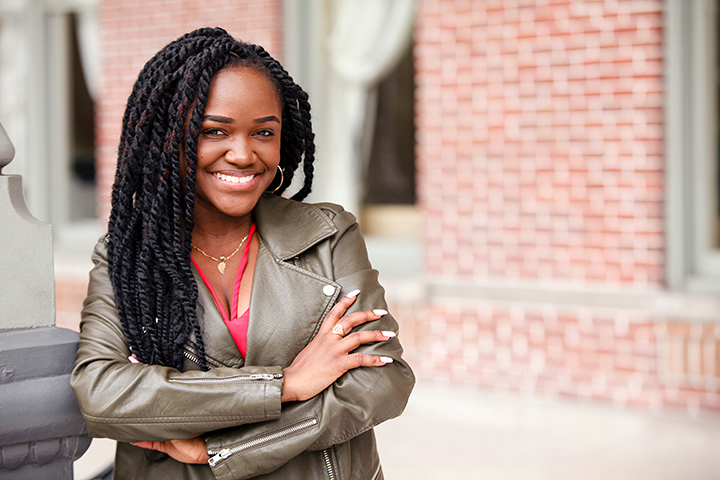 Nneka Jones ’20 won the William P. O’Dowd Memorial Emerging Artist Award at the Gasparilla Festival of the Arts the first weekend in March.

Growing up in Port of Spain in Trinidad and Tobago, Jones was always doodling and drawing. Her mother, father and three sisters would open their work planners and school notebooks to find Jones’ sketches serendipitously in the margins. She always found herself pulled to art, even in how it related to her science classes.

“I’d be more intrigued by the drawing of the skull and skeletal system, stuff like that,” she said. “I just was always pulled that way, and I kept practicing and drawing. It was progressive.” 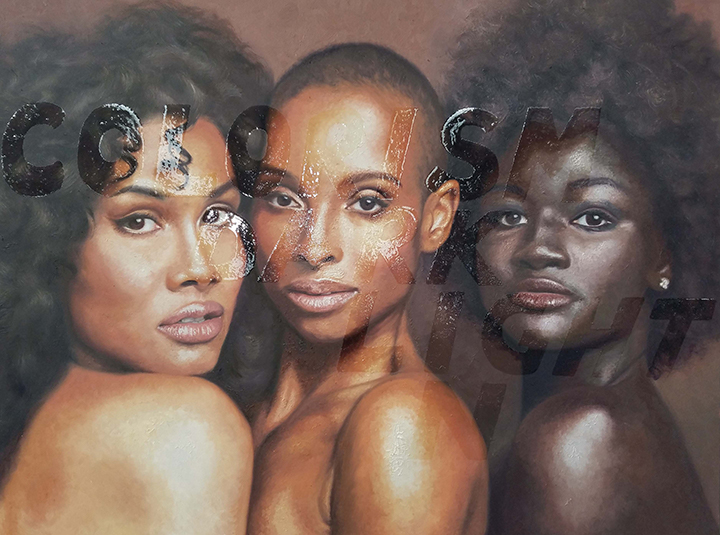 This painting, "Colorism," is mixed media on canvas (oil and a clear gloss/tint).

Jones explored both business classes and art in high school. She had friends at UT who told her about the beautiful campus and the professors they enjoyed, so she had the University in the back of her mind as a choice after she graduated high school. But at the top of her list were art schools. Her parents suggested she pick a school that would give her more options in case she found that art wasn’t going to work out. “I thought that made sense,” she said.

She started at UT as an art major, but considered switching to business, feeling self-conscious about her ability to make a career out of her art. Then she spoke with her professors.

“They told me that my artwork was extremely strong, and you’re very gifted, so why not give it a try at least for one more semester,” which she did, knowing she could change her mind after that. Soon after, she attended a faculty exhibition at the Scarfone/Hartley Gallery and noticed Professor Chris Valle’s paintings.

“They featured sheets of plastic over the human figure, and I was like no way, he has to teach me this,” she said. “There is no way I’m switching from art to marketing without taking a class from him. I have to.”

“During this past year she has started to combine experimental approaches and concepts that complement her technical abilities in painting very well,” Valle said. “I am excited to see her continue to hone her conceptual ideas as she begins to develop her culminating body of work for the BFA exhibition in May 2020.” 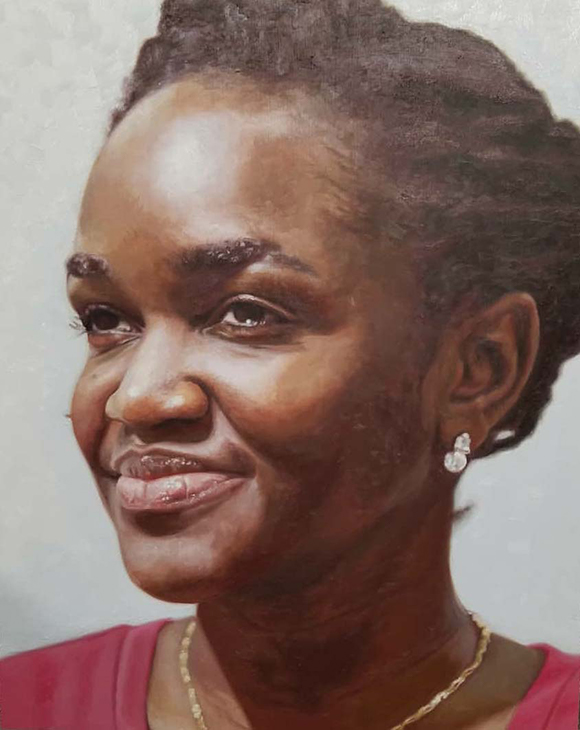 "My art is very narrative as well, so faces, expressions and emotions help with communicating a story or evoking emotions, " said Jones. This "Self Portrait" is oil on canvas.

Jones is happy she stayed the course. She is active in the Caribbean Students Association, vice president of the National Society of Collegiate Scholars and was recently invited to the selective collegiate honors society Phi Kappa Phi.

“The professors aren’t just professors. I wouldn’t say they are friends, but they go beyond that of just being my professor,” she said, citing Jack King and Ryan McCullough, who helped bridge her transportation challenges by purchasing art materials for which she would reimburse them. She is also thankful to her marketing professors, who have given her the tools to be able to speak about her artwork through the lens of branding.

As a sophomore at UT, Jones started an art blog on Instagram (@ArtYouHungry), where she posts regularly about her process, not just her pieces.

“I wanted to get my artwork out there,” said Jones. “With art, you can’t just make it and sit at home and hope people see it. You have to make the effort to get people’s attention in some way.”

It’s paid off — with opportunities for networking among other artists and commission requests. When she graduates next year, she hopes to build from those connections and work toward her ultimate goal of owning her own gallery. This summer, she has applied for a marketing internship in New York City, where one of her sisters lives. 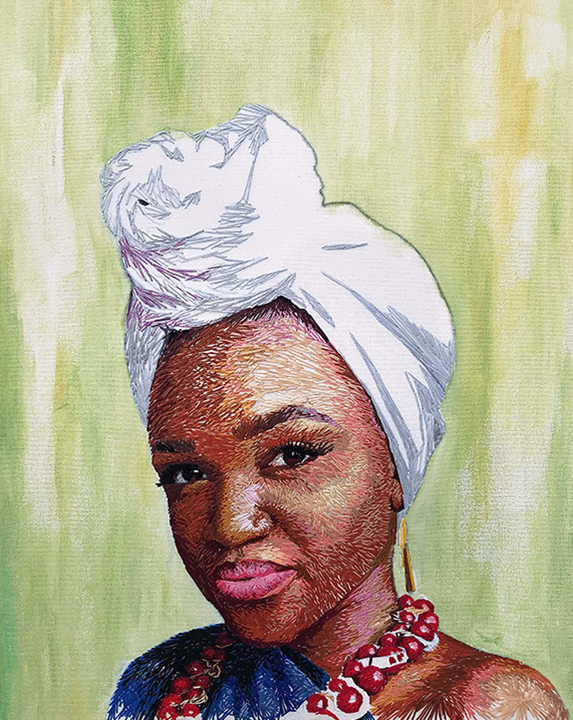 "Self Portrait II" is one of Jones’ experimental painting projects of the theme, "creating a painting without paint."

Jones doesn’t have a particular style or medium that she prefers. The experimental art course she took last semester opened her eyes to creating art on different surfaces. She created a self-portrait using embroidery that required a second look to realize it wasn’t paint but threads. She used condoms as the base of a series of three portraits to bring awareness to the issue of sex trafficking. Those pieces were submitted to the Gasparilla Festival of the Arts earlier this month, earning Jones the William P. O’Dowd Memorial Emerging Artist Award.

“My art is very narrative as well, so faces, expressions and emotions help with communicating a story or evoking emotions,” said Jones, whose artwork focuses on social injustices, especially with women.

For the Gasparilla submissions, Jones bought the condoms in bulk (which she did online to avoid embarrassment, as well as at UT’s Health Center), arranged them in a target pattern and then painstakingly applied gesso (a primer that prevents paint from being absorbed fully by the canvas) in all the cracks and crevices of the condom packages, which numbered up to 300 per painting. Then she waited for the gesso to dry, which took longer because of the plastic packaging of the condoms. It took several coats for the surface to be properly primed before she could then begin painting. 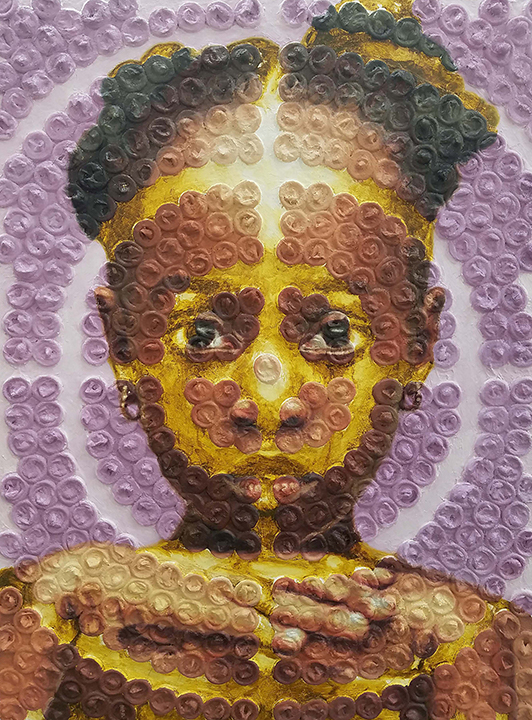 This painting, "Target," was one Jones exhibited at the Gasparilla Festival of the Arts. It’s mixed media where she did the painting over condoms to bring awareness to sex trafficking.

“It was fun but challenging,” said Jones of the time-consuming process.

She had only completed two, which took four weeks, and carried one to the Gasparilla preview party, intending to show just the single piece. Based on the highly positive reaction, she quickly decided to add one more to make it a series of three. That was one week before the show.

“I had to hold a fan over the condoms so they would dry,” Jones said. “I worked on two or three hours of sleep, but I finished it.” 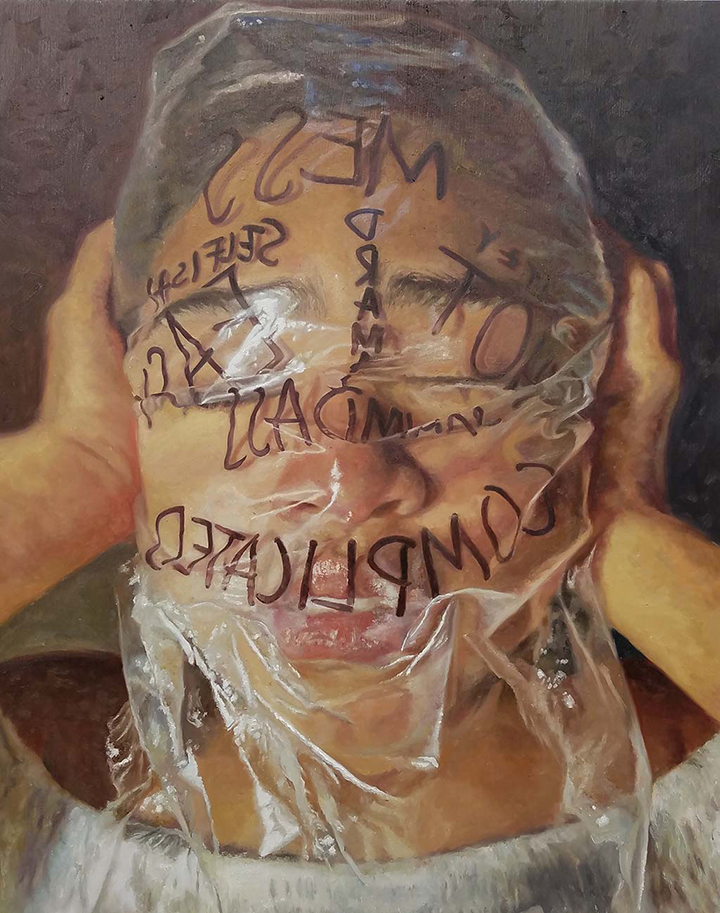 Jones wrote about this piece, called "The Power of Words," on her Instagram blog, "Here are some close up shots of the painting and my attempt to paint flesh (skin) through plastic. ALSOOO!!! My attempt to paint words as if they were written with sharpie marker." It’s in a similar style to the pieces by Professor Chris Valle that inspired Jones.

It was her first ever public show, and she took home the emerging artist award.

“It was amazing and much more than I expected,” she said. “People who had never seen me or heard me speak about my work had their own reaction to it by just looking at the art, without me speaking to them before. It was amazing. I don’t even have words to describe it.”

Jones nearly didn’t apply for the show when applications were due last fall. She was slammed with finals and end-of-semester projects, and didn’t think she’d have time. But there was a small voice inside her, telling her to take a risk.

“Part of me was like, just put yourself out there, because you never know what could happen.” 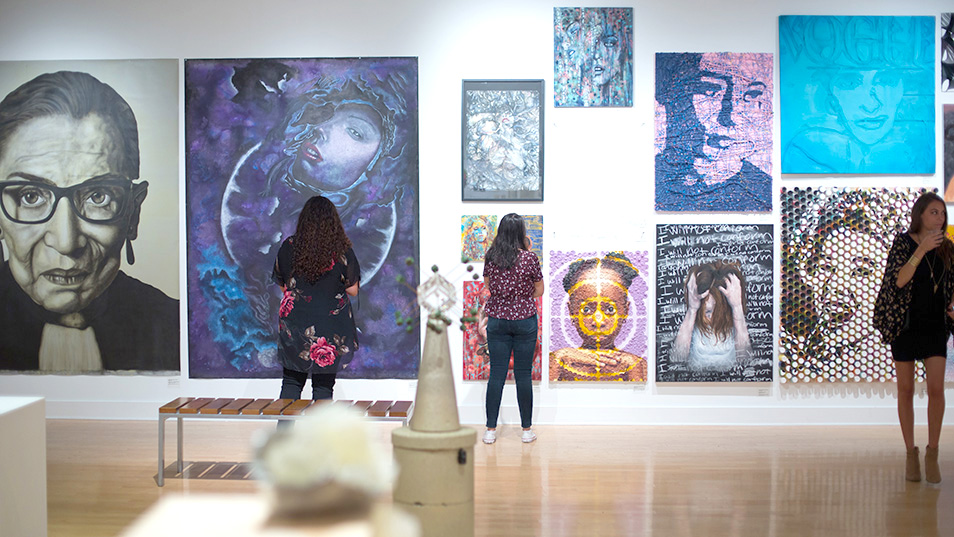