The Finance Major With a Flair for Fiction

When Kevin Mondlane ’20 M.S. ’22 from Mozambique, Africa, first arrived to The University of Tampa four years ago as a first-year, he had no idea what he was getting himself into. But after four years and the start of a master’s program, he is certain it was the right choice. 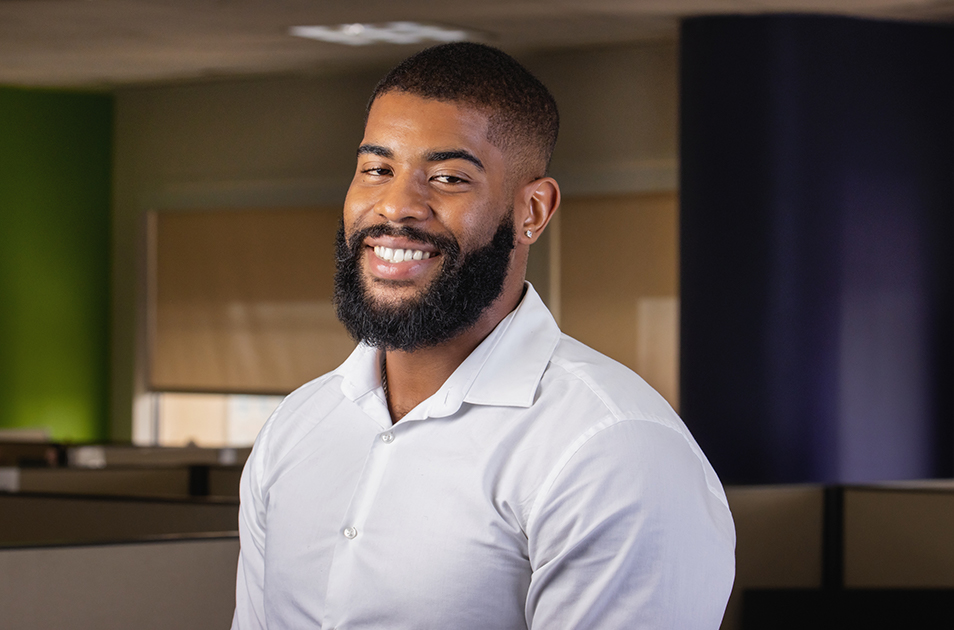 “Coming to Tampa was a huge step, because I didn’t know [the city of] Tampa existed before I applied,” said Mondlane, a May finance graduate enrolled in UT’s master’s in finance program. Mondlane had discovered UT only when browsing colleges that accept the Common App. After learning more about UT’s successful business program and the diversity of the student body, he chose UT.

About 1,200 of UT’s 9,600 students are international students like Mondlane, and it took him a bit to adjust at first. He encountered people who believed in common misconceptions about Africa, and he often had to explain his cultural background and habits, making it difficult to relate to other students at first.

“I think a lot of international students experience the cultural adjustments, so my whole first semester was pretty hard…it was getting used to things, getting used to the food,” said Mondlane, who missed family and friends from home. “But, in the midst of all of that I didn’t feel like I was in the wrong place.”

Mondlane originally came to UT as a management major. He knew he wanted to do something in the business industry, but still was a little unsure of his path to a professional career. It wasn’t until his junior year that he took his first finance class — FIN 310, Financial Management — but once he did he knew he had to switch his major.

“I did economics in school and I always enjoyed math and stuff like that, so I think that was the huge like eye-opener: finance had everything I like,” he said. “I never looked back.”

All UT students are required to take a certain number of credits of baccalaureate courses: The purpose of this is to give all students a well-rounded education and get them outside of their major-specific classes.

“As educators, we are consistently encouraging students to explore or experiment with interests through trying different classes or getting involved,” said Rachel Killam, senior assistant director of career exploration with Career Services. “We don’t always give due credit to the role that unplanned or unpredicted events play in our lives. Chance events often lead us to best friends, or learning something that changes the way we see the world or expose us to career ideas we would never have considered.”

“In college, it can be easy to be single-minded and focused, staying in the lanes of your major, yet miss all the opportunities that are all around you,” Killam said.

The baccalaureate classes that Mondlane took had a profound impact on him personally, professionally and academically – something he least expected. 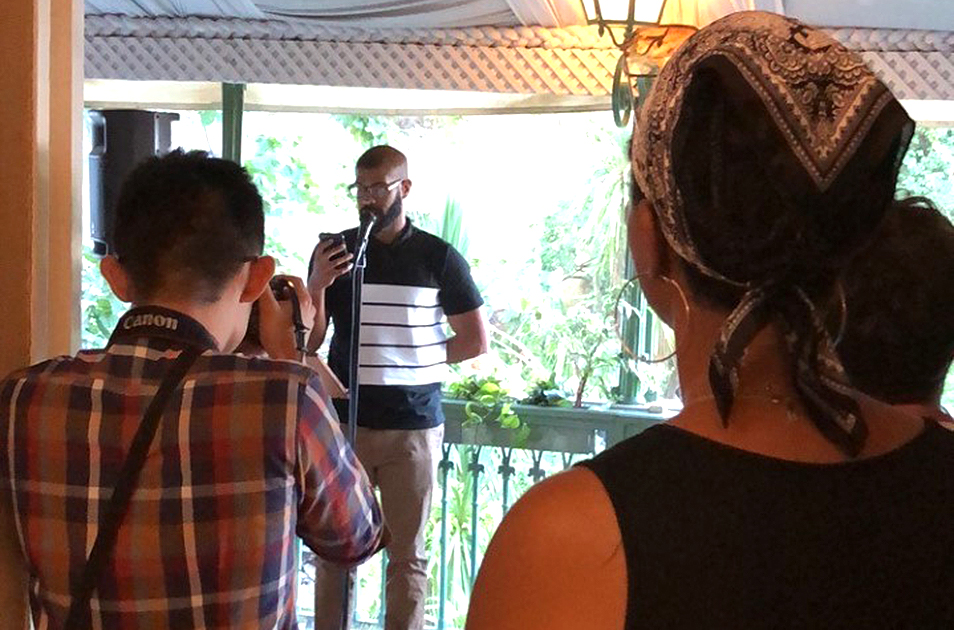 Mondlane discovered an interest in poetry, a genre he says, “You really have to be honest with yourself to produce the sort of work that is good.” He is pictured here at an open mic night (prior to the pandemic).

His sophomore year, Mondlane needed to take a writing intensive course. He chose to enroll in Introduction to Creative Writing in Fall 2017 with Shane Hinton, assistant professor of English and writing.

“That is the first time I’ve ever done poems, creative non-fiction and fiction, so that was my first taste of that and I absolutely loved it,” said Mondlane. “I found myself being able to take the academic, technical writing and transfer it to a more expressive field.”

Mondlane ended up enjoying the course so much that he chose to sign up for Poetry I the following semester.

“Taking that Poetry I class, I hate to say it because it sounds corny, but it was kind of life-changing,” said Mondlane. “You really have to be honest with yourself to produce the sort of work that is good.”

As he continued working hard in his writing classes, creative writing started to mean a lot more to him and open doors that were previously unforeseen. Mondlane was invited to attend the DISQUIET International Writing Program in Lisbon, Portugal, in the summer of 2018. Participants usually apply to attend the program, but Hinton, as an instructor with DISQUIET, invited Mondlane and a few other UT students who impressed him with their work in class.

“Going to Lisbon was a huge experience. I remember thinking ahead to it and being like, ‘I don’t know what me as a finance major has any business [being there] with all these people talking about the technical aspects of writing and strategies,’” said Mondlane. “And I’m just here like ‘yo, I just wrote some poems for class!’ But when I got there it was very interesting for me to see that even though I was just starting my writing, some of the work that I produced had a lot of impact, and I got some really good feedback.”

At the same time that Mondlane was enrolled in his Poetry I course, he decided to apply for an on-campus job as a tour guide with the Admissions Office to earn a little extra cash. He gave his first tour in May 2018.

“If you had told me four years ago when I got to Tampa, ‘you’re going to be a tour guide and a representative for the University and talk to random families all day, every day,’ I would’ve thought you were crazy,” said Mondlane. “When I first got here I was shy, barely knew how to speak to Americans, in general, and it was a little bit of a learning curve. [The role] helped me a lot to grow out of my shell.” 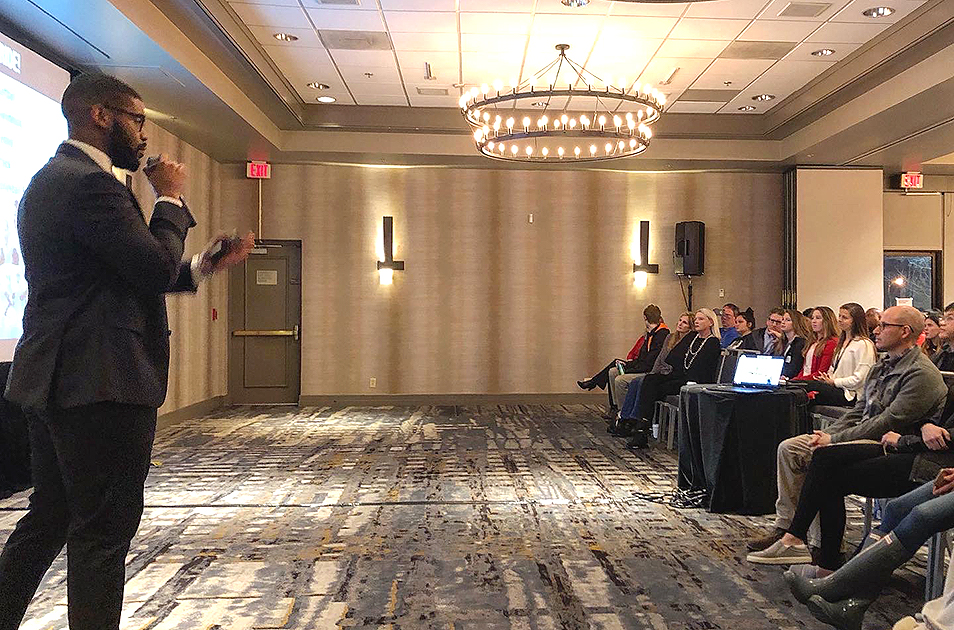 “If you had told me four years ago when I got to Tampa, ‘you’re going to be a tour guide and a representative for the University and talk to random families all day, every day,’ I would’ve thought you were crazy,” said Mondlane. Turns out, he’s a natural. *Photo taken prior to the pandemic.

As Mondlane continued his work with Admissions, he moved on to be an ambassador for UT and represent the school at Admitted Student Receptions across the country. Over the next two years, Mondlane says he had some of the best experiences in his college career and grew profoundly as he advanced his public speaking and networking skills.

“On Feb. 24, 2019, I gave my first ever Admitted Student Reception in front of a crowd of over 350 people in Chicago, IL,” said Mondlane. “The mixture of excitement and intense nerves was hard to manage, as it was my first real taste of public speaking at that magnitude. But I absolutely loved it.”

As his undergraduate career was coming to a close this past spring, Mondlane was expecting to start his professional career following his graduation in May. He always had plans to obtain a graduate degree, but wanted to get some work experience prior to going back to school.

But then, the pandemic hit.

Mondlane was concerned about finding opportunities in the midst of the crisis. With this, he chose to continue his education. This came with a new set of challenges: He didn’t get the chance to start working on graduate school applications and studying for the GMAT until late May, when many program deadlines were quickly approaching within weeks.

“I needed to continue my meaningful progress in my personal and professional growth after graduation,” said Mondlane. “That three-month stretch was certainly challenging, yet it was a period of time that helped me determine what I really want for my future.”

Mondlane worked hard over the summer gathering recommendations, taking the GMAT, talking to people about programs across the country and preparing his applications. He ended up applying to schools including Georgetown, University of South Florida and University of Toronto. But in the end, the answer was easy: He chose to stay at UT. 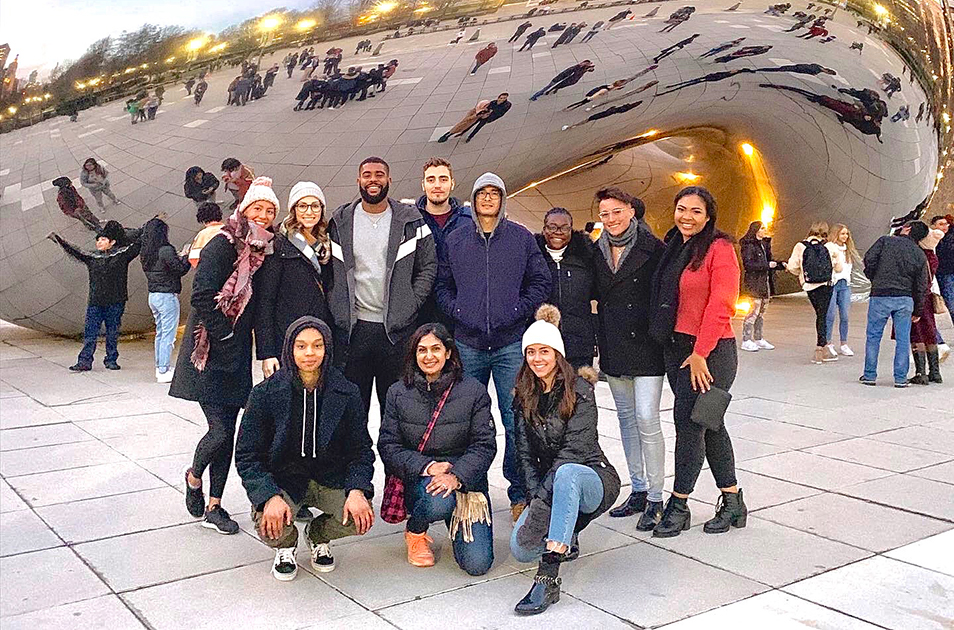 Mondlane became an ambassador for UT and represented the school at Admitted Student Receptions across the country. In those two years, Mondlane says he had some of the best experiences in his college career and grew profoundly as he advanced his public speaking and networking skills. *Photo taken prior to the pandemic.

“UT, at the end of the day, was always my number one choice,” said Mondlane, who says that the faculty at UT, who have acted as not only teachers but also mentors, are a big part of what kept him here. “Some other place had to convince me not to stay here. [Tampa] is the right place to be for me.”

Mondlane is continuing his work with the Admissions Office as a part-time graduate ambassador and student evaluator. As of right now, his career goals are to gain experience in investment banking and earn certification as a Certified Financial Analyst (CFA) and get into financial consulting. He plans to bring writing into the mix by establishing financial literacy and education programs for underprivileged students, as well as publish work such as poetry, novels and non-fiction.

“The notion or assumption that if you do one thing like finance, you don’t cross over into other inter-disciplinary things, and my [writing] classes cleared my assumption of that,” said Mondlane. “I think a lot of people don’t realize the benefit of putting your two skills together.” 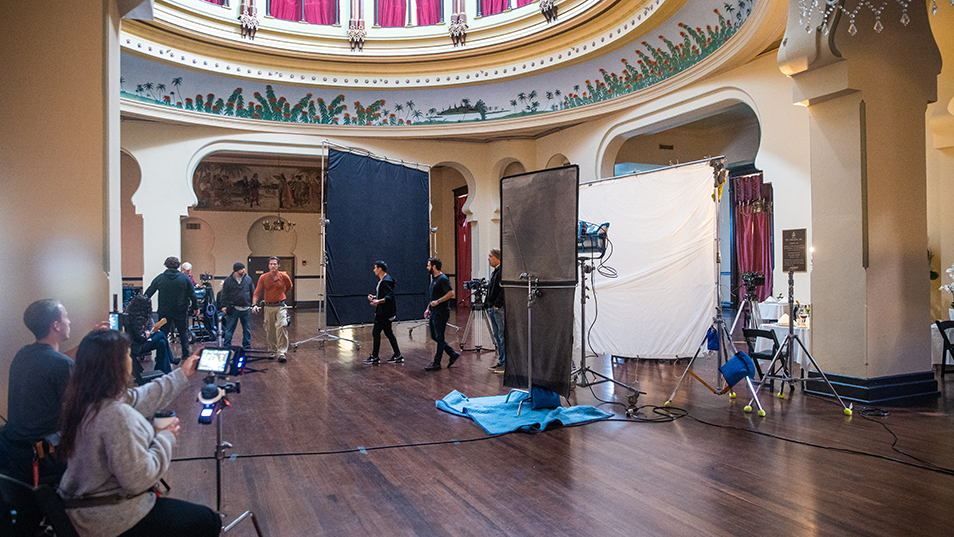 The two-part event will take place in the Charlene A. Gordon Theater in the Ferman Center for the Arts on Thursday, Dec. 2. 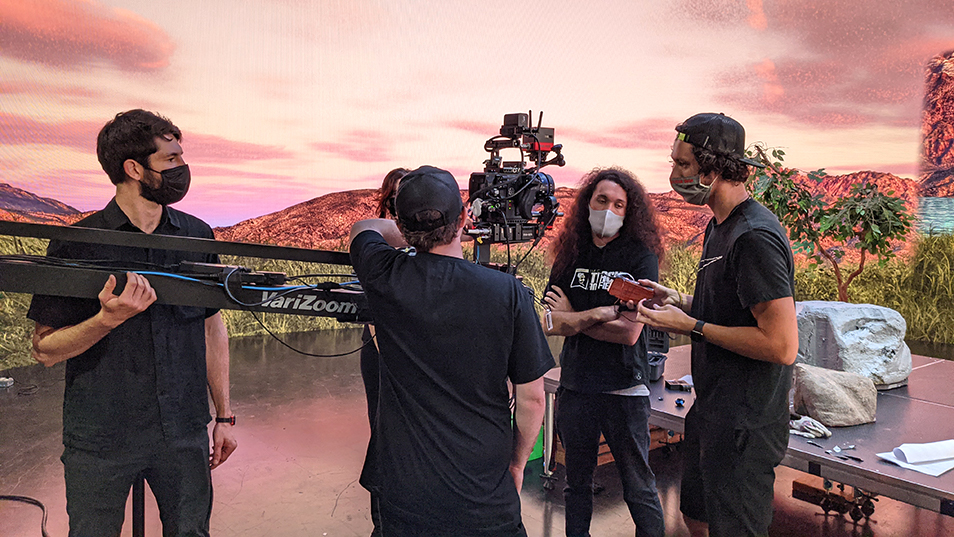 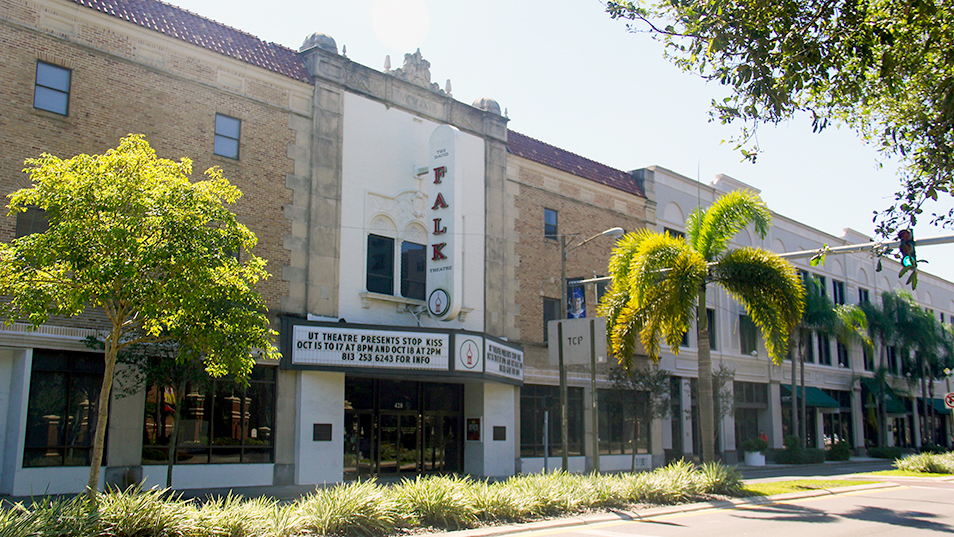