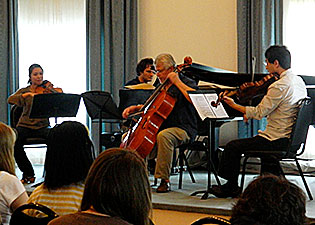 This week-long program includes chamber music coachings led by an internationally distinguished faculty of artists; master classes for all chamber groups; separate master classes for violin, viola, cello and piano; solo and chamber music performances by the faculty and the students; choir rehearsals, world drumming classes and other music-related activities for all students.

The 2019 official schedule will be sent out to all accepted participants on Monday, June 3, by email. Please add chambercamp@ut.edu to your address book.

Fees There are different fees for commuter and resident campers...

A non-refundable $45 application fee will be due once the application has been submitted. Please use “Part Two” of the online application to submit the payment. Checks, money orders, and Visa or MasterCard payments are accepted.

If the student is accepted to participate in the TdM Chamber Music Workshop, the $45 application fee will be applied to the total fee.

The remaining balance will be owed on the camper’s check-in date. (cash or money order only)

All applicants must create a video of their music audition and post it online using YouTube, ZeeMee, Vimeo or another online video platform. A link must be emailed to  chambercamp@ut.edu with the student’s name and instrument in the subject line of the email. No CD or DVD auditions will be accepted.

Applicants are encouraged to choose material that best exemplifies their talents.

All applicants will be notified of their status within two weeks after the May 3, 2019, deadline.

Please note: Due to the camp’s increasing popularity, only a limited number of pianists will be accepted. Also, please bear in mind that this is an audition-based camp, therefore not all applicants will be invited to participate. However, we try our best to accept as many students as we can.

About the Chamber Music Workshop Faculty The workshop is led by a group of five highly skilled musicians...

Nancy Chang - violin
A native of Taiwan, violinist Nancy Chang has performed internationally under some of the world’s most celebrated conductors. As a member of the Verbier Orchestra in Switzerland from 2003-2007, Chang toured over 20 countries, performing regularly under the batons of James Levine, Charles Dutoit and Gustavo Dudamel, to name a few. She received her bachelor's and master's degrees in violin performance from the Manhattan School of Music, studying principally with Ik-Hwan Bae, Lucy Robert and Peter Wenograd. She has particpated in masterclasses with Sydney Harth, William Preucil, Miriam Fried and Glen Dicterow. Following her years of study in New York, Chang was appointed a fellow at the New World Symphony in Miami Beach under the baton of Michael Tilson Thomas, where she served as rotating concertmaster from 2003-2006. She is a former ASTA competition winner and has performed as soloist with The Florida Orchestra, the Burbank Chamber Orchestra, West Los Angeles Symphony and the California State Los Angeles University Orchestra. Chang is a current member of the faculty at the Eastern Music Festival and has attended Spoleto USA and the Texas Music Festival. Other professional orchestra experience includes appearances with the Albany Symphony, Sarasota Orchestra and the Opera Tampa Orchestra, where she currently serves as concertmaster. Chang joined The Florida Orchestra in 2006 and was appointed Associate Concertmaster in 2007.

Helga Winold - cello
Helga Winold is Professor Emeritus at the Indiana University Jacobs School of Music. In 2008 she was honored at Indiana University with the President's Award for Distinguished Teaching. She has presented highly successful master classes in the United States and abroad, including being a faculty member performing and teaching at the Festival Internacional de Mùsica Erudita de Piracicaba in Brazil. As a performer, Helga Winold has played solo and chamber music recitals in many of the leading music centers of the United States, Europe, and Asia, including appearances as soloist with the Munich Philharmonic and other orchestras, presentations of the complete Beethoven cycle of works for cello and piano in Vienna and other cities, and performances of contemporary works for cello.

As a researcher and writer, Helga Winold has contributed articles in the American String Teacher, Strad Magazine and other publications, and lectures and seminars at universities in the United States and abroad.

Lei Liu - violin/viola
Lei Liu joined the ranks of the Florida Orchestra in 1994. Since then, he has moved his way up to become assistant concertmaster. Prior to his career in the Florida Orchestra, he has been a part of the Florida Symphony in Orlando as well as the Singapore Symphony Orchestra. He is also a dedicated conductor of the Serenade Strings Orchestra in the Pinellas Youth Symphony. He has received his bachelor'sdegree from Central Conservatory inBeijing, China, and his mast'er degree from Temple University. Liu is the violin instructor at The University of Tampa.

Lowell Adams - cello
Lowell Adams is the assistant principal cellist of the Florida Orchestra, principal cellist of the Lake George Opera Festival in New York and the associate artist instructor of cello and chamber music at The University of Tampa. He was an artist in residence member of the Esterhazy Quartet in Missouri. His many distinguished teachers included Raya Garbousova and members of the Vermeer Quartet. He has received his bachelor's and master's degrees in cello performance from Northern Illinois University and artist's diploma from Hart's School of Music. He has appeared with St. Louis Symphony, Grand Rapids Symphony, Esterhazy Quartet and the Dorian String Quartet. Adam's teaching experiences include visiting professor of cello at the University of Missouri and instructor of cello at the University of South Florida, The University of Tampa, Florida Southern College, Tampa Bay Youth Orchestra and the Suwanee Summer Music Camp.

Grigorios Zamparas - piano
Grigorios Zamparas has received critical acclaim for his versatile performing career as recitalist, orchestra soloist and chamber musician in Greece, Bulgaria, former Yugoslavia, Russia, Latin America, South Korea and the U.S. He is a frequent guest at numerous festivals worldwide, having performed several times at the prestigious Newport Music Festival (Newport, RI), the Mainly Mozart Festival (Miami, FL) and the Salon of the Arts (Sofia, Bulgaria), among others. He has been featured as a soloist in more than 20 different piano concerti with orchestras such as the Porto Alegre Symphony Orchestra (Brazil), Indiana University Symphony Orchestra (U.S.), Togliati Philharmonic (Russia), the Sofia Soloists and the B. Martinu Philharmonic of the Czech Republic. Zamparas is assistant professor of music at The University of Tampa where he oversees the piano program. His recordings have been released by Centaur Records.