You Are Your Own Happiness Dealer

“Welcome to my cube.” 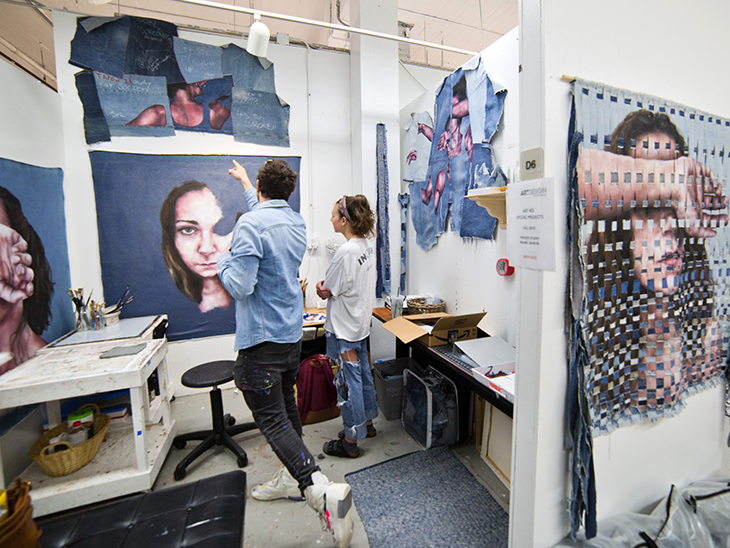 “This is awesome. I’ve never seen anything like this,” said Siff of Sarah Hughes’ portraits on denim. “I like the message. I like the execution. And I love that you’re doing something I’ve never seen before. It’s sick.” Photo by Emily Driscoll ’20

Siff, born in Brooklyn and based in Los Angeles, was at UT as a featured guest in the College of Arts and Letters in Conversation event on Feb. 4 and a student lecture on Feb. 11. He is spending four weeks in residence at CASS, Contemporary Art Space & Studio, owned by UT alumni Jake Greatens ’11 and Cassie (Rouse) Greatens ’10. His show, “Evidence of Life,” opens Feb. 28.

“Through symbology and portraits I decided I was going to record an ongoing story of the human journey,” said Siff about the show. “I want to leave some proof that I was here.”

Siff has worked in television, movies, print, voice-overs and video games (he’s the voice and body of Rocco Pelosi in the video game series Grand Theft Auto). But finding his voice as an artist has brought him great joy. 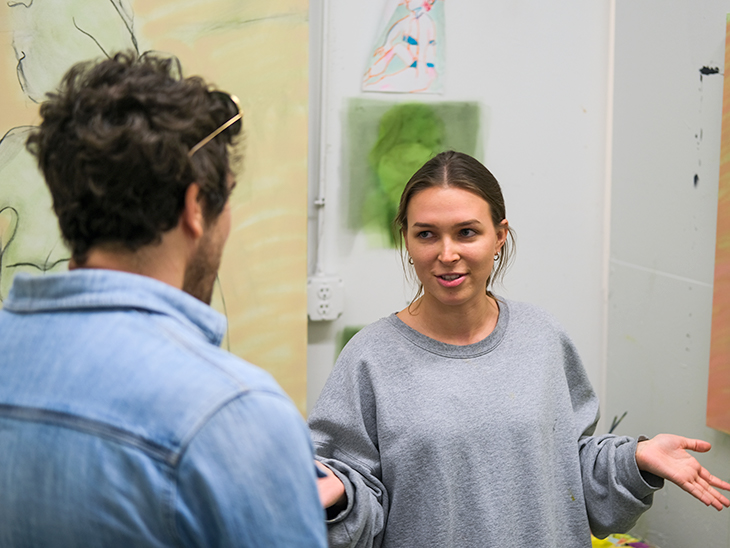 “This is so my vibe,” Siff said to Lauren Harvill ’20 of her work that is based off of her own photography and uses a muted palate with pops of fluorescents. “I like the energy of it.” Photo by David Garcia ’22

“I wanted to be a baseball player, a bone doctor, a Ninja Turtle and an actor, and all those things didn’t work out like I planned. But something different did,” he said. “Who I am today I couldn’t have predicted, but it’s what happens after you start doing something that you love for 10 years straight, never missing a day of creating something.”

Siff has done commissions and installations for companies including Mercedes-Benz, Adidas, Marc Jacobs and Forbes. His collaborators include Helmut Lang, Jay-Z and Saint Laurent. He designed album cover art for Ty Dolla $ign.

His work blurs the boundaries between pop art, abstract-expressionism and street.

“I am my own happiness dealer. I’m an artist, a painter who tells stories with faces, symbols, elements, icons, emojis, hieroglyphs or whatever you’d like to call them,” Siff told the art students gathered in the Scarfone/Hartley Gallery on Feb. 11. “Sometimes I don’t even know how to decipher them or title them. I just know they remind me of things that I’ve lived through and things that I live for and things that I can’t live without.”

As part of the Feb. 11 lecture, Siff also spent time with five seniors critiquing their work.

“This is awesome. I’ve never seen anything like this,” said Siff of Hughes’ portraits on denim. “I like the message. I like the execution. And I love that you’re doing something I’ve never seen before. It’s sick.” 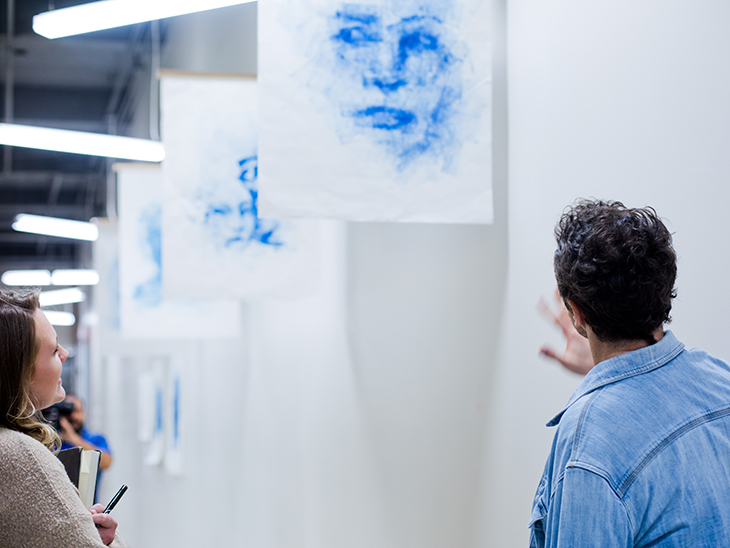 Siff, whose art lies at the intersection of fashion, music and hip-hop, was impressed by the work of the seniors, including Natalie Brooks, Courtney Pasterchick, Lauren Harvill and Nneka Jones. He commented on the complexity, beauty of form, the presentation of the art and the use of their experiences to tell a story and make a social difference.

“These pieces are telling something about you. It’s not your ego — it’s your contribution,” Siff said. “Someone might see that painting and be like wow, that just speaks to me about what it feels like to be a woman or what it feels like to have those struggles and they’ll get it. Not everybody has to get it.”

He encouraged them to be open to new experiences and experiments, as each layer will add a new perspective to their art.

“You guys are so lucky to have found your voice at such a young age. Don’t stop,” Siff said. “This is really powerful stuff.”

Hughes, a double major in painting and museum studies with a minor in art therapy, gave credit to her UT mentors.

“We have to give credit to our professors here, who are incredible,” Hughes said. “They help us to find that voice, and I think all of us can attest to that.”