Although women representation in science, technology, engineering and mathematics (STEM) jobs has increased since the 1990s, women still make up only a fraction of engineering and computer science occupations. 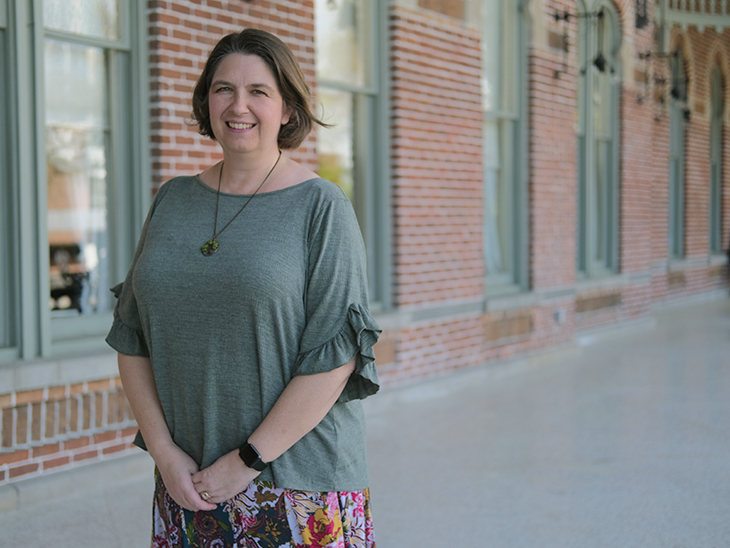 Jennifer Blessing, assistant professor of psychology at The University of Tampa, is working to develop a way to encourage girls to become more interested in STEM during grade school. Photo by David Garcia ’22

According to the Pew Research Center, women make up roughly 14% of the engineering occupational group and about a quarter of computer jobs .

Jennifer Blessing, assistant professor of psychology at The University of Tampa, said part of the reason is in how STEM careers are being communicated across genders.

“Routinely in our study and in subsequent studies, we found that girls say they want to go into science that helps people,” such as health-related STEM careers, said Blessing, who has been studying the issue for years. “Boys see science not as an end to helping someone, but just doing something. That means that what we have to do is change the conversation,” for how STEM careers are traditionally marketed to girls.

Blessing is partnering with Eric Brosch, executive director of communications at Walden University, to develop a way to encourage girls to become more interested in STEM during grade school, and they are planning to do so with the help of fighting robots.

By participating in robotics clubs, the students learn skills outside of what they’d learn if they were to go into a health-related STEM field. Robotics will allow them to experience things like coding and engineering in a fun and creative way.

Blessing and Brosch are receiving the Walden University Research and Applications for Social Change Grant (RASCG) for their research titled, “Impact of LEGO Robotics Enrichment Curriculum on STEM Interest in Minority Girls in Grades 4 and 5 .”

The team will be working to develop a curriculum this summer that will educate and engage elementary school kids on building “battle bot” style LEGO robots, known as LEGO Sumo. The robots will act autonomously, without direct human control, through simple coding and programming.

“What you do is you build a robot, you program it and you hit go,” said Blessing.

Specifically, the team will be examining how the girls talk with one another during this robotics camp through observation as well as interviews. 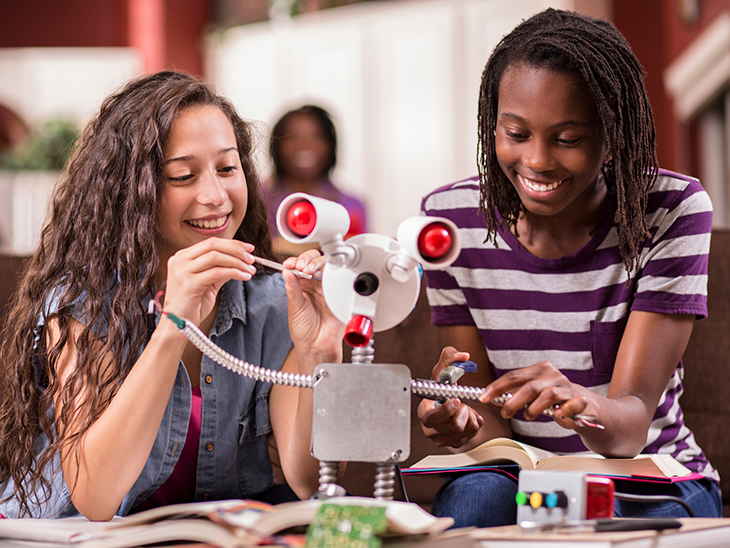 Blessing’s research is aiming to provide opportunities for minority girls to have a chance to see themselves as capable STEM participants with futures in those fields.

"We will examining how the instructors talk about science and engineering concepts and how the girls will be echoing that in their talk with each other. For example, when girls are working in pairs to code their LEGO Sumo Bot, will they be talking about, ‘this goes there and not there,’ or will they say things like, ‘we need to make sure we measure the distances; we need the motors to be rotating left this time,’” said Blessing. “We want to see that their conversations are peppered with science and engineering terms and not just informational exchanges.”

The team will be working alongside a community partner to create a group of fourth and fifth grade underrepresented minority girls. Aside from women overall being underrepresented in STEM, minorities are even more so. Only 7% of the overall STEM workforce in the U.S. is comprised of Hispanics, while African-Americans make up just 9% of STEM workers, according to the Pew Research Center.

“Some of these barriers are simple access to STEM programs in schools and in out of school places,” Blessing said. “One of the community partners we are working with on this grant is an educational specialist who works with underrepresented students in science classes.  She’s working to flip that story and provide opportunities for minority girls to have a chance to see themselves as capable STEM participants with futures in those fields.”

Brosch, who as a parent and a coach, has been involved over the past five years with all-girls LEGO robotics teams and FIRST LEGO League challenges in the Brandon, FL, area. He has years of self-taught coding with LEGO robots and is helping to develop the curriculum with Blessing. His professional job as a communicator translates to his ability to teach his teams coding and science, said Blessing, whose children go to the same high school as his. Brosch’s daughter is one of three girls out of 65 kids involved with robotics at the school, which was where their idea began.

Blessing will be measuring the psychological results on the girls from the summer program. Their aim is to create a curriculum that not only teaches kids how to build robots, but also encourages the development of conversations and interest about science and engineering for minority girls.

The team plans to begin collecting data by September and will present their findings to Walden University in January 2021, publishing around the same time. They also plan on sharing this curriculum across the nation with schools, robotics clubs and possibly children’s museums to help everyone: including underrepresented boys as well.

“We’re going to demonstrate the success of the curriculum,” Blessing said. “From a psychology stand point, we want to know how it changed the way girls talked about it. We won’t be asking, ‘How much did you remember?’ but rather, ‘Did it spark your interest?’”