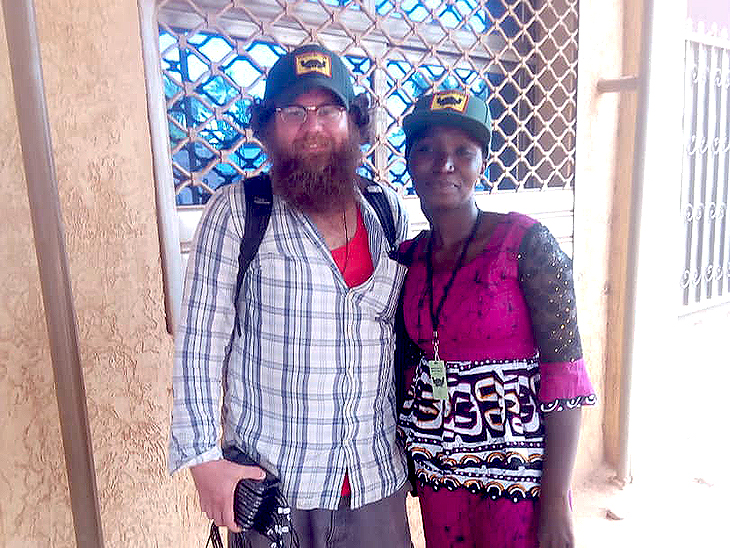 Professor Kevin Fridy, who specializes in West African governance, recently published a manuscript on how to mitigate support for Islamist insurgent groups in Burkina Faso with funding from the Joint Special Operations University. Photo courtesy of Kevin Fridy

Most recently, Fridy found himself in Burkina Faso, another West African country that's just north of Ghana. In the summer of 2019, when the U.S. State Department was warning people not to travel there due to an outbreak of violence, Fridy packed his bags and spent a little over two weeks near the capital leading a research team with a colleague from the University of Georgia, Margaret “Molly” Ariotti. “Right now [the citizens of Burkina Faso] are in hard times, through no fault of their own really,” said Fridy.

Fridy said the country experienced a massive increase in terrorism in 2019 due to what many suspect were terrorist groups from neighboring countries. Those groups were likely fleeing crackdowns in their countries, moving through Burkina Faso’s porous borders and setting up camp. Fridy had received funding for a project from the Joint Special Operations University (JSOU), an agency within U.S. Special Operations Command, which is located at MacDill Air Force Base in Tampa. The goal was to produce a manuscript designed to look at how people understand their local governance environment and how that relates to the impact of terrorism.

Foreign policy arms of government — like the U.S. Department of Defense, State Department or Agency for International Development — often work through other formal governments, that is those controlled by the central government of the country. However, if the people being served aren’t utilizing these formal methods of government, then the impacts of the work will be less effective.

“We’re finding that a lot people use things we wouldn’t understand as formal governance to fill these rolls,” said Fridy. “If you’re going to the mayor to solve something and the people are all going to their imam or their chief or some big man up the street and ignoring the mayor on this issue, you’re probably wasting resources.”

Utilizing a 17-person research team that he trained with Ariotti, Fridy was able to collect (after quality-control checks) 992 responses from a 45-minute survey conducted door-to-door in Burkina Faso. They asked questions similar to, ‘How safe do you feel in your community?’ ‘What are your opinions on different ethnic groups?’ ‘To whom do you go in order to fix a problem — whether it’s the need to dig a well or assistance in finding a job?’ Fridy conducted the research for JSOU and submitted the manuscript, "Informal Governance as a Force Multiplier in Counterterrorism: Evidence for Burkina Faso" in late 2019, and it was published in 2020. 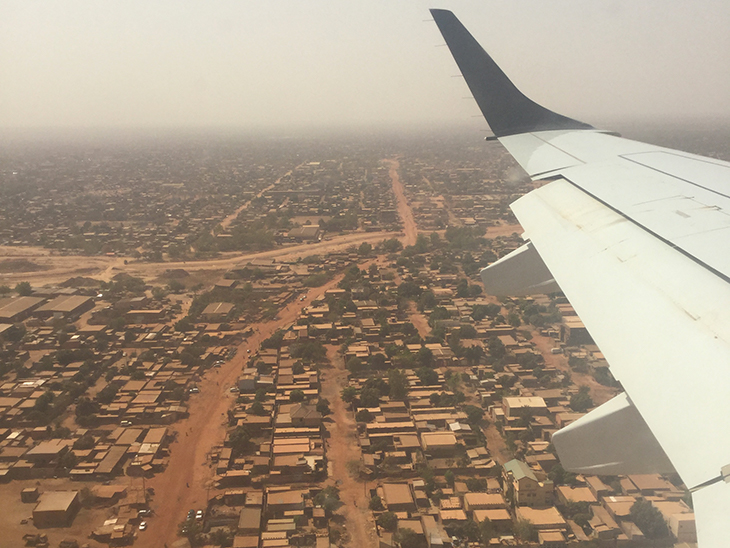 The big mine of data Fridy’s team collected offered many opportunities beyond the JSOU manuscript for some sophisticated data analysis that could be tested with an assortment of control variables, Fridy said. So after assessing his most promising, detail-oriented and driven students from his Research Methods Sequence course, and with independent research grants from UT’s Office of Undergraduate Research and Inquiry (OURI), Fridy worked with Ariana Ferraro ’20, Julia Ingram ’21 and Cheyenne Lee ’20 to tackle a different part of the larger puzzle examining predictors of terrorism in Burkina Faso.

The team was to present their findings at the Midwest Political Science Association conference in Chicago in April but it was canceled due to coronavirus concerns. The students each presented as part of UT's OURI research symposium held online in May, and they are currently working with Fridy on finalizing their papers to be published in peer-reviewed journals this summer.

Ingram looked at the relationship between socio-economic status and governance, Lee explored gender and security concerns, and Ferraro examined the impact of personality on support for vigilantism. 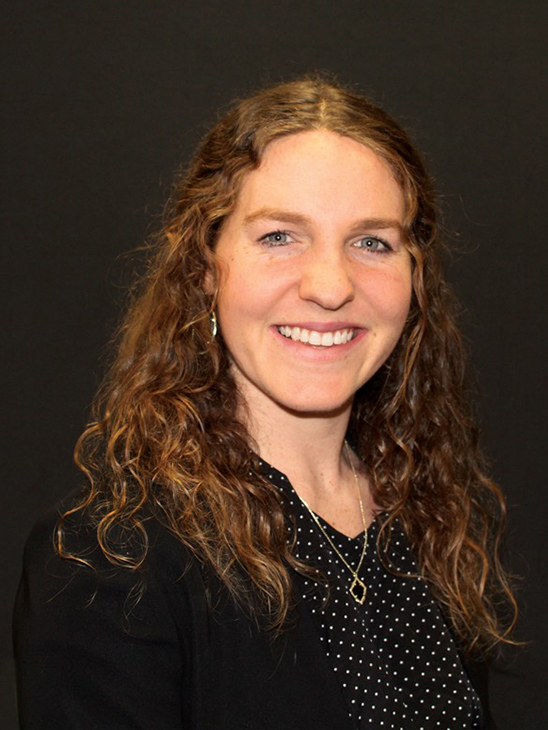 In her abstract, Julia Ingram ’21 wrote, “The intermingling of a few vigilante organizations and the well-established Islamist extremist groups in Burkina Faso make this study geopolitically relevant for regional security and for nations targeted by ethnic militias and/or Islamic terrorists.” Photo courtesy of Julia Ingram

“State weakness in Burkina Faso provides an ideal environment for groups to take the law into their own hands because vigilantism surges when the formal system fails to provide a proper level of security for its citizens,” Ingram, a double major in political science and history, wrote in her abstract. “The intermingling of a few vigilante organizations and the well-established Islamist extremist groups in Burkina Faso make this study geopolitically relevant for regional security and for nations targeted by ethnic militias and/or Islamic terrorists.”

Ferraro ’20, who graduated this May with two degrees in environmental science and political science with a sustainability minor, said, “It was the most challenging thing I did in college.” She looked at how individual variations in stable psychological characteristics (the five core traits — extraversion, openness to experience, neuroticism, conscientiousness and agreeableness) affect individual responses to vigilantism in Burkina Faso. 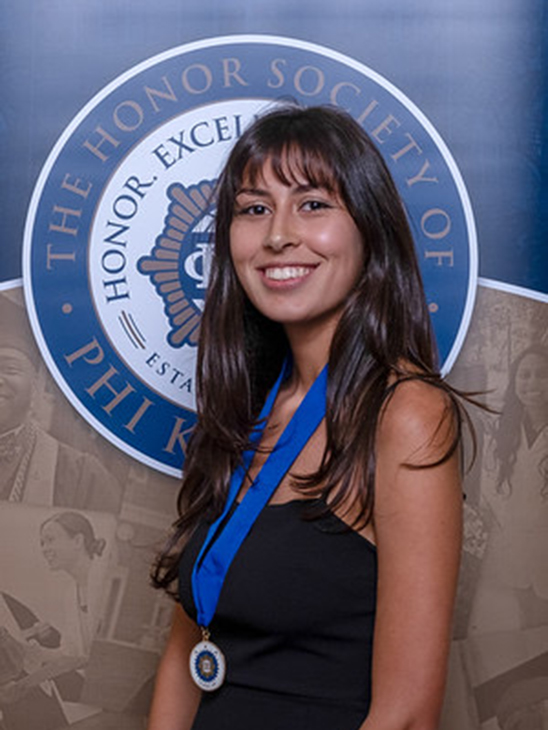 Ariana Ferraro ’20, who graduated this May with two degrees in environmental science and political science with a sustainability minor, said, “It was the most challenging thing I did in college.” Photo courtesy of Ariana Ferraro

Ferrero, who is aiming for a career in environmental policy, found that if you’re agreeable and conscientious, then you’re more likely to see these formal mechanisms of state as a solution to solving law and order problems. Whereas, if don’t express those traits, then you turn to vigilantism as a way to solve these problems.

Lee, a political science major with a minor in law, justice and advocacy, said that previous research in other regions showed that gender could be a variable for how one responds to violence. So she asked if this finding led true for Burkina Faso. 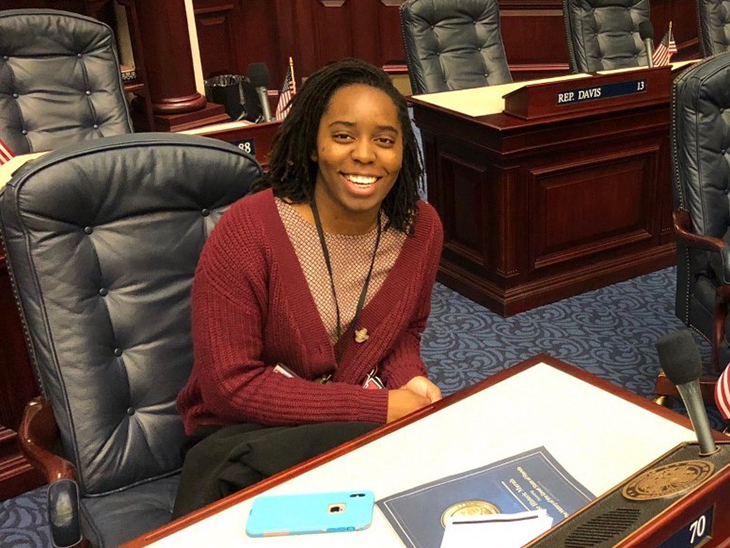 Cheyenne Lee ’20 said that previous research in other regions showed that gender could be a variable for how one responds to violence. She wanted to see if that held true in Burkina Faso. Photo courtesy of Cheyenne Lee.

“My findings were that gender was not a predictor of perception of security in Burkina Faso, but proximity to violence was,” said Lee. Fridy noted that much of the developing world, including Burkina Faso, hasn’t moved beyond a binary thinking of gender, and due to several reasons, including the value in researching how people who self-identify as women experience violence compared to men, the gender question was left binary.

Ingram, who defended her paper as her Honors program thesis this past spring, looked at socio-economic class and governance. Asking about salary isn’t effective as most people have piecemeal work, so they asked questions like, ‘Do you have kids in school? Can you go to the clinic if you need to? Do you have electricity? Do you have running water?’

“What [Ingram] found was a really clear picture and one we anticipated,” Fridy said. “The formal governance of the state (police, members of parliament, mayor) and NGOs (which are looked at as Western-ish organizations) are where elites turn to. They view this as a logical place to take their problems. The more informal places, like village development council, chief, imam, family and friends — that’s where the lower class turn. The formalized state is not meeting the needs and expectations of the poor, and Burkina Faso is a very poor country.”

Ingram said the skills she refined, such as researching in large databases for scholarly journals and honing her coding and statistical analysis skills, will serve her in a career in politics, serving in an elected position at the state or local level. She said Fridy’s mentorship made all the difference.

“Dr. Fridy is a phenomenal mentor. He is very easy to talk to and bounce ideas off of. He was critical of my work and offered great advice on ways to improve my final paper,” Ingram said. “He got me excited about the topic and excited to work through any challenges I had.”

Fridy already has another OURI grant waiting for the next academic year, this one using satellite data to measure environmental impacts in West Africa. The next step? Finding more of those detail-orientated and driven UT students.