Since August, a UT team has been trolling the waters of Tampa Bay, sticking their hands into the mouths of sharks.

“[The first time], I was actually more scared of the bacteria in their mouths; each shark has a different personality so some are spunky and like to bite, others will just hang, so I always have to be careful not to get too used to it,” said allied health major Lilli Sutherland ’20, who is working with biology major Nicholas Greenberg ’20 on an undergraduate research fellowship aimed to help Tampa Bay doctors. 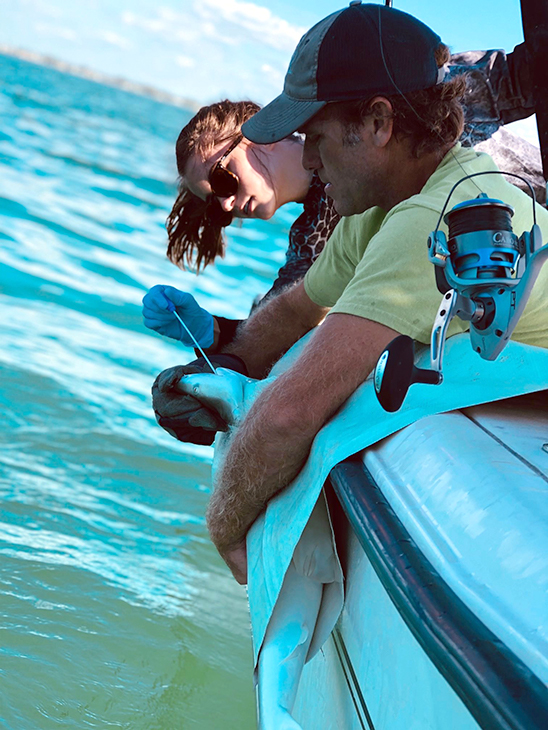 “We’re both science nerds and ocean nerds,” said Greenberg, who reels the sharks in from the Grady White, UT’s 27-foot boat reserved for marine field work. “I’m a crazy shark nerd and fisherman, so for me this was like an excuse to get out on the water. But we’re really passionate about sharks as well as medicine, so it’s a perfect project for us. It’s so fun.”

The fellowship, which is provided by UT’s Office of Undergraduate Research and Inquiry, gives the team funding of just under $7,000 for academic year-long research. The team had to submit a written application to be reviewed by the Undergraduate Research and Inquiry faculty standing committee, which values proposed projects that will bring an original contribution to the field or discipline. At the end of the research, grant recipients are required to either present their findings at a conference of their choosing or publish research.

Greenberg and Sutherland came as friends to UT from Chicago, growing up with little exposure to marine life but having a desire to dive in and learn more. While in the lobby of Morsani Hall, they were brainstorming ideas for research projects and narrowed in on combining sharks with the medical field.

In their digging they came across a study done by Dr. Robert Borrego, a general surgeon practicing in Palm Beach, FL, that focused on shark bacteria susceptibility to antibiotics. Borrego’s research only included 20 samples of one shark species. Greenberg and Sutherland decided to expand on Borrego’s research and include samples from several species of sharks found locally, including bull and blacktip sharks, which are responsible for 16% of attacks worldwide, according to the Florida Museum website. 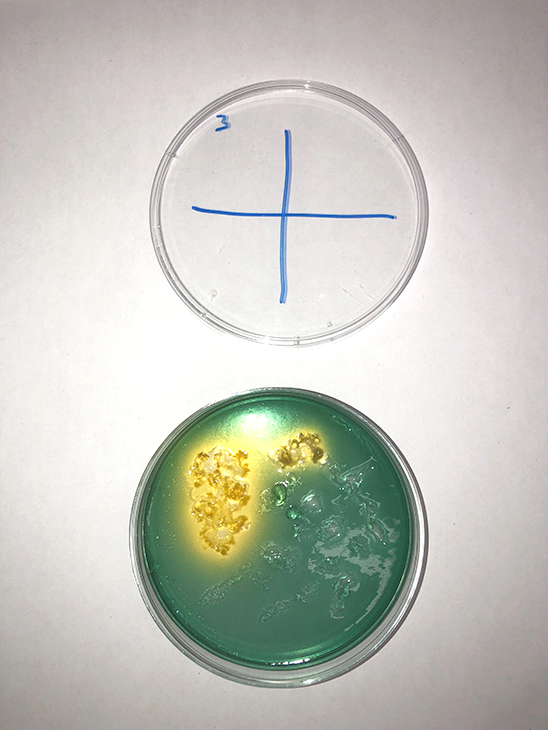 When a human is bitten by a shark, pathogens and bacteria can transfer due to the severity of laceration often associated with a shark bite, creating a number of health issues. Bacteria can also be resistant to many different antibiotics, making it difficult for health care professionals to treat shark bite victims.

Greenberg and Sutherland started pitching their idea to professors at UT their sophomore year and found mentors in biology professors Ann Williams and Dan Huber.

“The research idea has a ton of scientific merit, but I was more impressed by the fact that they pitched an idea to Dr. Williams and I,” said Huber. “Not many students have thought through the process deeply enough to pitch an idea to their professors.”

It took a year and a half to get the necessary permissions and project set up, but by August they were out on the water.

There’s no typical day for the team while collecting samples.

Once a shark catches on to the bait, Greenberg reels in the shark close to the edge of the boat. Moving quickly so they are as least disruptive to the shark as possible, Ambrosio then slides a mat under the shark, which is then slightly lifted out of the water by Sutherland. While the shark is held out of the water, Sutherland reaches inside its mouth with three cotton swabs to take samples.

The sharks are then let go, and the samples are placed on individual media plates and taken back to the microbiology lab. The plates isolate bacteria the team is looking for that could be pathogenic to humans. Through several tests, the team is able to read if those pathogenic bacteria are present. The samples that are more unusual are set aside to be sent out to an off-site commercial lab for genetic testing.

When a human is bitten by a shark, pathogens and bacteria can transfer due to the severity of laceration often associated with a shark bite, creating a number of health issues. Bacteria can also be resistant to many different antibiotics, making it difficult for health care professionals to treat shark bite victims. Greenberg and Sutherland hope that with their findings, they can help Tampa Bay doctors treat shark bite victims with the right antibiotic.

“What we’re looking for is if the bacteria in these mouths of sharks is able to be treated with typical antibiotics, or do we need to tell these doctors to use stronger antibiotics,” said Sutherland. “So far what we found is that absolutely, [doctors] should be using different antibiotics, because there are crazy patterns and resistances for the bacteria [to antibiotics],” said Greenberg. 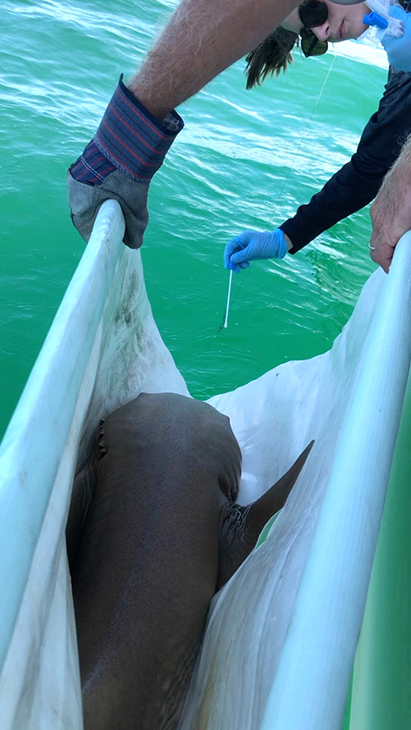 The team currently has tested 23 sharks and will likely have 30 by the time the research is finished in early spring semester. The team is planning on publishing and presenting their findings at the ASM Microbe Conference in Chicago in June 2020. From there, the research could go in a number of directions.

“Our hope is to publish the research, and then create a triage guide for medical professionals to be able to quickly assess threats of infection from shark related injuries,” said Huber. “Right now, we are focused on the relationship between shark and bacterial species, but we could also investigate how these relationships change throughout the life of the sharks and how habitat affects these relationships.”