As Jasmine Velez ’19 secured chains on a prisoner in the Sam M. Gibbons Federal Courthouse and escorted him into the prisoner elevator, she knew this was a job most students don’t have the opportunity to experience. She sat down in the courtroom next to the prisoner and reflected as she realized working in law enforcement would become her future.

“Although it can be scary at times, working with criminals is definitely a rewarding experience,” said Velez. “You learn to appreciate the life you live after working with some of these inmates.” 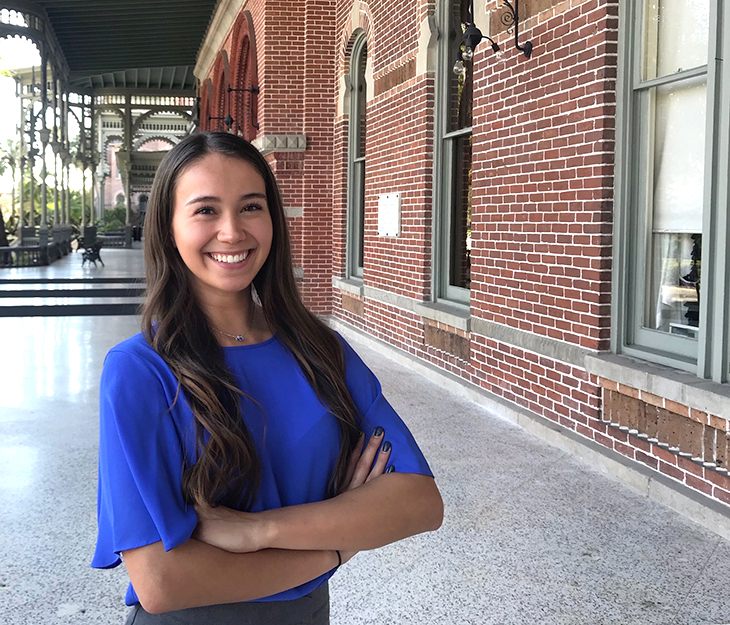 As a senior, Jasmine Velez has worked two internships full of interactive experiences with the U.S. Marshals Service and with the Office of Inspector General in the U.S. Health and Human Services Department.

When Velez began attending UT, she was an undecided major and wasn’t sure where to take her education, until she took a basic criminology course. She developed a passion for law and wanted to get involved as she pursued a degree and future in criminology and criminal justice.

As a senior, Velez has worked two internships full of interactive experiences. This fall, she has been interning with the U.S. Marshals Service, located in downtown Tampa. She works with deputies and helps transport prisoners to and from the courthouse. She said her current job include chaining prisoners, bringing them into courtrooms, sitting in court with the prisoner and making sure everything goes smoothly.

With the U.S. Marshals, Velez also files warrants to take criminals into custody and organizes transportation for inmates who need to be moved to different federal facilities across the U.S., like airlifts.

Throughout the second semester of her junior year, Velez interned with the Office of Inspector General in the U.S. Health and Human Services Department, which is also located downtown.

With the inspector general, she worked on presenting information to the FBI, DEA and other federal agencies in an investigation against a local pharmacy that looked at the major pill discrepancies between opioids.

“I basically looked at how this pharmacy in particular was taking in a certain number of pills that weren’t actually prescribed,” said Velez. “I did all the research behind this case and found every person’s information and identification in relation to the pharmacy. After, I actually put together the report with the numbers and kinds of pills that were missing from the pharmacy and presented it to the DEA.”

After Velez presented this information, she was also able to conduct a search warrant with the inspector general, which allowed her to photograph an entire medical facility that filed the pharmacies’ medical records and find the doctors who showed involvement in the illegal activities.

Wanting more experience in the field, Velez extended her internship with the inspector general from May until the beginning of the fall semester.

“It was interesting to work with all these members and agents, because there are multiple personalities present, not only in the office, but within the different agencies,” Velez said. “A lot of people think it’s a very contentious environment, and it’s not. We actually work together more than people think we do, and it was awesome to be included in that.”

As Velez finishes her criminology degree at UT, she has high hopes for herself as her end goal is to be a U.S. federal agent.

“It’s definitely a little intimidating stepping into this field, since I’m a woman working in a male dominated field. But, knowing that I can do the exact same things that men do, if not better, is empowering at the same time.”

Velez said Sorle Diih, assistant professor in criminology and coordinator of law enforcement internships, has been her biggest influence throughout her time at the University and helped her apply for her first internship.

“If I did not take that leap of faith to apply, I would not be where I am today now having two federal internships under my belt. I’ve made so many connections and received various praise and awards, and I can’t thank him enough, said Velez. “Having these two internship experiences has taught me more than I ever could have learned in the classroom, and I definitely feel prepared for my future.”

With UT’s criminal justice and criminology program being the only Academy of Criminal Justice Sciences certified program in the state of Florida, Diih said that the rigorous academic program and internships will enable Jasmine to make an immense contribution to any criminal justice agency.

“Jasmine immediately stood out to me,” said Diih. “Although I helped her begin her initial internship search, she has excelled so much on her own. She is a very confident and disciplined student, and I have no doubt in my mind that she will do big things when she leaves UT.”