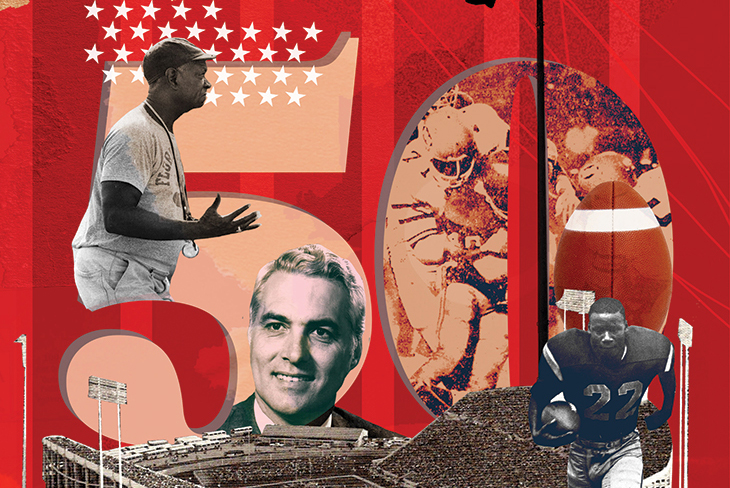 Privately, Tampa police lob­bied to cancel the game. It seemed too great of a risk, especially in the South, which grappled with school integration and civil rights. There was fear of an ugly incident.

Instead, it became a landmark event, a showcase of spirit and sports­manship, a spectacle of spine-tingling athleticism. There were no incidents — only great football and an unforget­table atmosphere.

By the time FAMU, a black college, had defeated the overwhelmingly white UT Spartans 34-28 at the old Tampa Stadium before a sellout crowd of 46,477, the two diverse sets of fans were alternately energized and exhausted.

Now that game is part of a faded scrapbook for the once-notable UT football program, which was disbanded following the 1974 season.

People of a certain age still spin romantic tales about the old days, when UT’s play-making luminaries (including NFL-bound John Matuszak ’73 and Freddie Solomon ’75) and the program’s giant-killing reputation transformed Spartan games into Tam­pa’s hottest ticket on a Saturday night.

In terms of national significance, though, UT football will forever be remembered as the Southern program that boldly helped to usher in college football’s new social era.

“It was a night and an experience that none of us will ever forget,” said Tampa resident Fran Curci, the UT coach who later led the programs at the universities of Miami and Kentucky. “I can still close my eyes and feel it.”

Thirty minutes before kickoff, the stadium’s two free-standing sides were filled to capacity. About a thousand more spectators stood wherever there was room.

On the west side, all the fans were white.

On the east side, all the fans were black.

“There was a tension in the air like I had never seen — before or since — in that stadium,” said Tampa business­man David Epstein, who was a 14-year-old Spartan ballboy that night.

“Just the aura and the noise that was all around us, it was a positive­ly electric, big-time feel,” said UT quarterback Jim Del Gaizo ’69, now a South Florida resident who played five seasons in the NFL and later worked in the mortgage business.

Curci even cut short his halftime speech, so UT players could return to the field and witness a performance by the FAMU band, the “Marching 100.”

“None of them had ever seen anything like that,” Curci said. “Every­body dancing. The tuba guy spinning around. The whole night was a show, and that was part of it.”

As a UT student, Marc Tand ‘71, a trumpet player from New York, was mesmerized.

“There were no cell phones, but after the game I called my parents back home and said, ‘You won’t believe what that band did,’” said Tand, a retired music teacher. “They filled up the football field and the sound they produced, it was just mind-blowing.

“For me, that made the night. It was bigger than the game. And don’t get me wrong. That was one heck of an exciting game.”

When Del Gaizo’s fourth-down pass fell incomplete from the FAMU 14-yard line in the final seconds — and the combined offensive output had reached 1,135 yards — the outcome had been decided.

Curci sprinted to midfield for an embrace with legendary FAMU coach Jake Gaither, who died in 1994 at age 90. Curci also visited the Rattler locker room to compliment key FAMU players.

If there was even the threat of a combustible spark, Curci’s gestures snuffed it out. The game stood on its own merit. The aftermath was peaceful.

In 2009, Curci was invited to speak at FAMU’s homecoming ceremonies in Tallahassee, where 20 members of the 1969 Rattlers returned to celebrate the 40-year anniversary of a game that broke racial barriers.

“I’m very proud that I had a role in such a game and that The University of Tampa was part of it,” Curci said. “This wasn’t some sort of pre-meditated attempt to make history. Look, we were just trying to put our program on the map. We were trying to get attention and national publicity by building a big-time team.”

Curci, a former Miami assis­tant who was hired by the Spar­tans before the 1968 season, set things in motion during his first meeting with UT officials.

“I told them, ‘If you won’t allow me to recruit black players, I’m not com­ing,’” Curci said. “When we got started in that room, I pretty much took over the meeting. I said, ‘I know you have questions for me, but let me start with my own questions. Why haven’t you had a black football player? Is this the attitude of the university?

“They said, ‘No, that’s why we brought you here. We want to break the color line.’ So that’s how it started.’’

“All The Way’’ McQuay was a spectacular talent, a 195-pound back who ran 9.5 in the 100-yard dash and seemed bound for the University of Wisconsin in the Big Ten Conference. But Curci made McQuay his personal mission.

“I was at their house every single night,’’ Curci said. “Leon’s mother finally told him, ‘This man is interested in you. You’re going to Tampa. You wouldn’t like that weather in the North anyway.’”

As Curci built his Spartan war chest, Gaither’s frustrations mounted. Times were changing.  Slowly, programs around the nation were integrating. Gaither no longer had his pick of black athletes.

His no-nonsense “recruiting pitch” letter to McQuay — Dear Leon, You are invited to attend Florida A&M University — was no match for Curci’s persistence.

Gaither, who had 22 conference titles and six black-college national championships, enjoyed a secure legacy. But something was missing. Eddie Jackson, a longtime FAMU administrator who served as Gaither’s sports information director, said Gaither was bothered by being labeled as a “black coach.” He wanted to play a white team and show his program’s prowess.

State politicians often courted Gaither’s favor, trying to sway the black vote. But when Gaither sought repayment — the scheduling of a game against the University of Florida or Florida State University — he was consistently rebuffed. For two years, Gaither unsuccessfully lobbied members of Florida’s Board of Regents, which oversaw the state’s public universities.

Then Gaither got a call from Curci, an old coaching friend who was now leading the private-school football program in Tampa.

“Jake, I know you want to play some games in our stadium (Tampa Stadium), but you should just play us,”Curci said.

“A black school playing a (predominantly) white school was unheard of,” said Carr, who was recruited by Curci out of Erie, Pa. “Those guys (FAMU players) were giving us a hard time that night, saying that we (black players) belonged with them. I never gave black and white a thought until I got to Tampa. I wasn’t prepared.

“I went into a place to get water and the guy said, ‘We don’t serve you people.’ The first night I was getting a tour of the campus, we drove around town and saw this mini-riot in the streets, whites against blacks. I was ready to go back home right then. There were times I should have left. But I stuck it out. It showed me the world for what it is.”

The UT-FAMU game showed the football world what it could become. 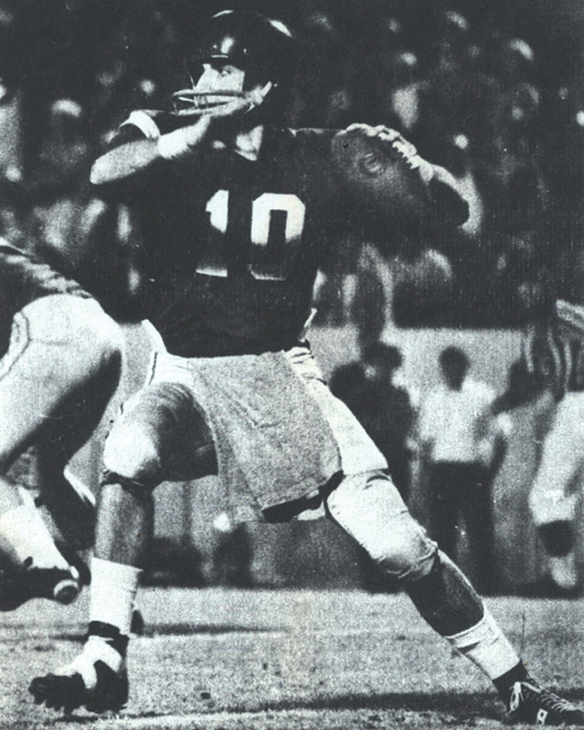 “Just the aura and the noise that was all around us, it was a positively electric, big-time feel,” said Jim Del Gaizo ’69, UT quarterback.

On the field, it was a classic.

FAMU quarterback Steve Scruggs, of St. Petersburg, rushed for 111 yards and passed for 189. Del Gaizo was 23 of 45 for 423 yards, including two touchdowns to running back Paul Orndorff ’72, a future professional wrestler (known as “Mr. Wonderful”).

McQuay, largely held in check, scored twice. But so did FAMU’s Hubert Ginn, a future Miami Dolphin, including a 4-yard touchdown run that put the Rattlers up 34-28 with 1:58 remaining.

Del Gaizo needed just four completions to position UT at the Rattler 14-yard line for a frantic final-minute finish. From there, though, with the crowd noise at jet-engine levels, he tossed four consecutive incompletions.

“We were crushed to come up short,” said Carr, also a standout Spartan wrestler who became a wrestling coach at the University of Kentucky and Arizona State University. “But I think the game helped race relations all over, not just in Tampa. I guarantee you people in other schools took notice of it.’’

Years later, he was honored at a reception. Somebody asked him about all the FAMU championships. Which one was the biggest?

“None of those,” Gaither said. “The biggest game was when we beat The University of Tampa.”

This story first appeared in the Fall 2019 UT Journal. 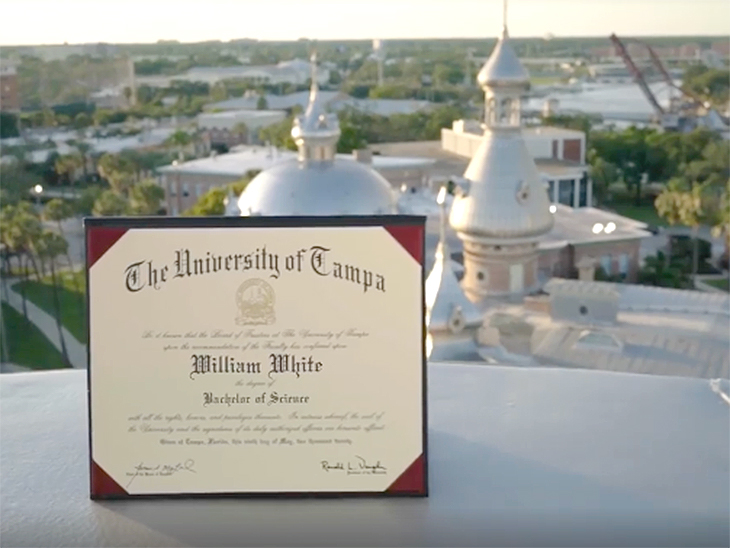 Class of 2020 Receives Diploma on the Top of a Minaret 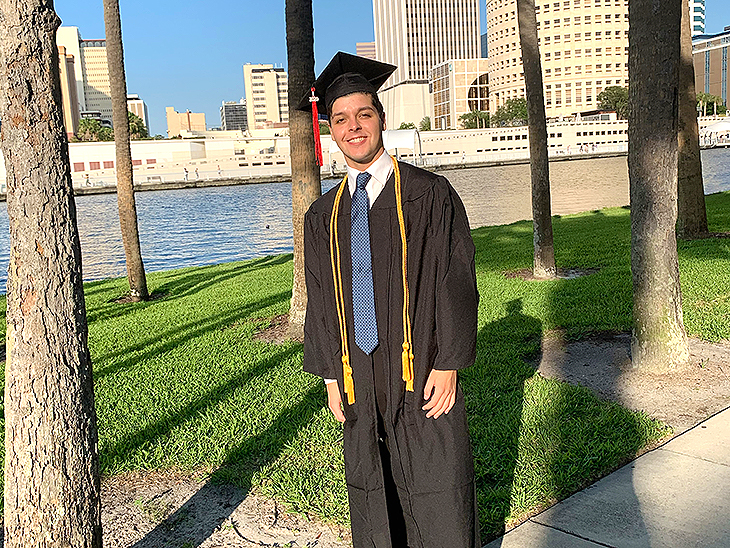 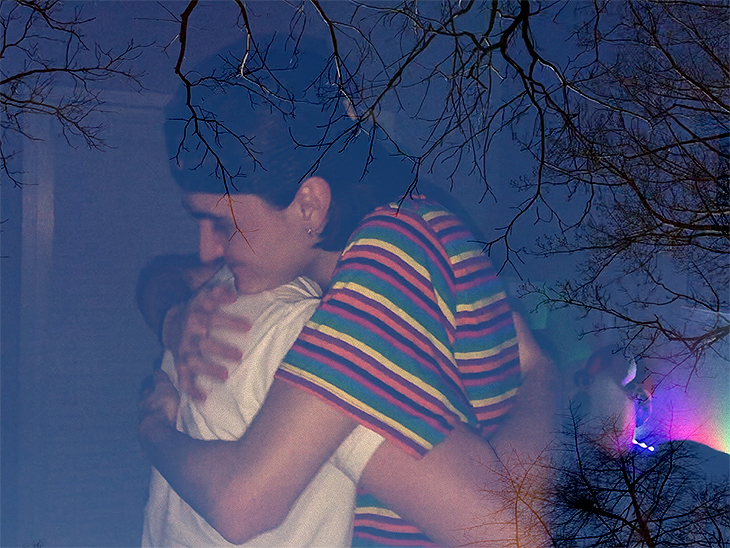