A Day on the Bay

By the end of the daylong cruise, the 19 students — most first-year students experiencing their inaugural ride on the R/V Bios II — were visibly exhausted, sun-drenched and satisfied. The bore of the twin Cummings diesel engines and the ubiquitous odor of mud, saltwater and shellfish made the 45-minute cruise back to the marine field station a dreamy, blissful ride, perfect for staring out to the horizon and falling in and out of sleep. 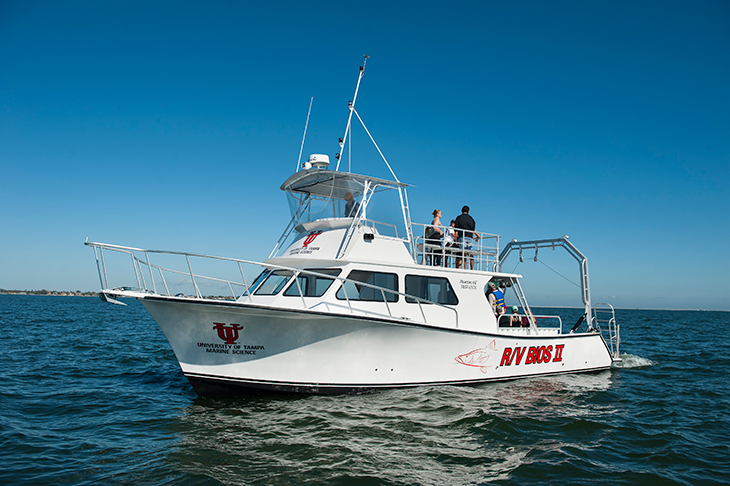 For six hours on Tampa Bay, students dragged nets in and out of the water, hurriedly observed, separated, documented and released sea creatures, ran hydraulic equipment and cleaned the decks. Definitely more Deadliest Catch than the Love Boat, but without the risk of 12-foot waves, capsizing and hypothermia.

UT’s research vessel, the R/V Bios II, is a 47-foot-2-inch trawler custom-built for marine science research. It is docked at UT’s Marine Science Field Station on Tampa Bay, a short drive from campus, that allows quick and easy access to the water. The boat was built in Slidell, LA, by Newton Boats and christened in 2018. It is taken out up to 20 times a semester. It holds 400 gallons of diesel fuel, can accommodate 30 and sleep six (but hasn’t yet), has a boom and 1,800-pound winch, and can be easily configured for trawling or dive trips.

While the flybridge offers the most panoramic views of Tampa Bay, its air-conditioned cabin offers a welcomed respite from the elements. Its shallow draft — at less than four feet — helps the student and faculty researchers access most reaches of Tampa Bay. It can comfortably cruise at 18-20 knots, making half-day trips manageable. And perhaps most of all, the boat’s hull graphics — sporting the UT logo and UT colors — leaves no doubt who is filling the marine science research space in Tampa Bay.

John Ambrosio, coordinator of the Marine Science Field Station, and a member of the class of 2001, said there really is no comparison between the Bios I, a converted 1958 fishing boat that required an occasional tow, and the Bios II.

“The Bios II is a well-equipped, highly effective research vessel. Being able to run these trips is an amazing opportunity for students,” Ambrosio said.

Sitting in the air-conditioned cabin with three fellow students on the settee, Haley Lasco, a senior from Illinois, is one of the last students to have studied on the Bios I. Like Ambrosio, she said the Bios II is a welcomed change. 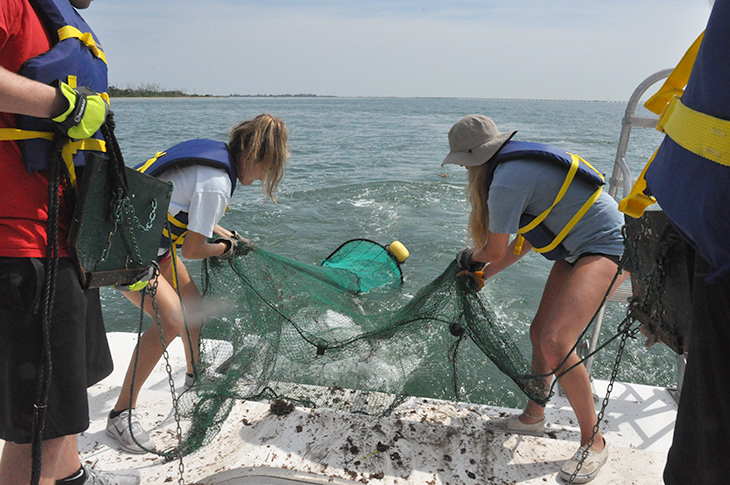 “This trip really gives students an introductory experience to marine science research,” said Michael Slattery, an assistant professor of marine science. “And it helps them to start thinking about what’s beyond the classroom experience.”

Kaitlyn Wykoff, a freshman from Houston who is majoring in marine science-biology with a sustainability minor, said she came to UT because of the marine science program and the many job opportunities in the field. As for the Bios II, she was to the point: “I think it’s sweet. Super cool,” she said.

In addition to the Bios II, UT also owns smaller research vessels to further facilitate research in Tampa Bay’s estuaries. The fleet includes 23- and 27-foot Grady White center console boats, the former with a single Yamaha 250 outboard engine, and the latter with twin Yamaha 250 outboards. Plus, there is an assortment of small jon boats, inflatables, canoes and kayaks.

A representative from the Florida Department of Environmental Protection-Tampa Bay Aquatic Reserves, who studies hard bottom fish, and a representative from the Tampa Bay Regional Planning Council joined the trip to see first-hand what the students would net that day. A University of South Florida student, contemplating graduate study in marine science, was also invited to get experience deploying a trawl net.

While UT professors welcome non-UT research scientists and local professionals to observe and work on their own research, it also serves a dual purpose — networking.

“I occasionally bring on board some local professionals for the students to interact with,” said Michael Slattery, an assistant professor of marine science who organized the trip. “I wanted students to have the opportunity to talk to professionals doing the jobs they claim to want to pursue. This is invaluable for finding internships.”

The students arrived at 8 a.m., shoved off by 8:30 a.m. and headed approximately 19 miles  toward the Sunshine Skyway Bridge and the waters offshore Fort De Soto Park near Mullett Key. It was a picture-perfect, mid-spring “Chamber of Commerce” day, with clear skies, calm waters and a comfortable 80-degree temperature. Porpoises tracked the boat’s progress.

The plan was to do two trawls, observe and document the organisms that come up from the deep, and then head back to the marina. 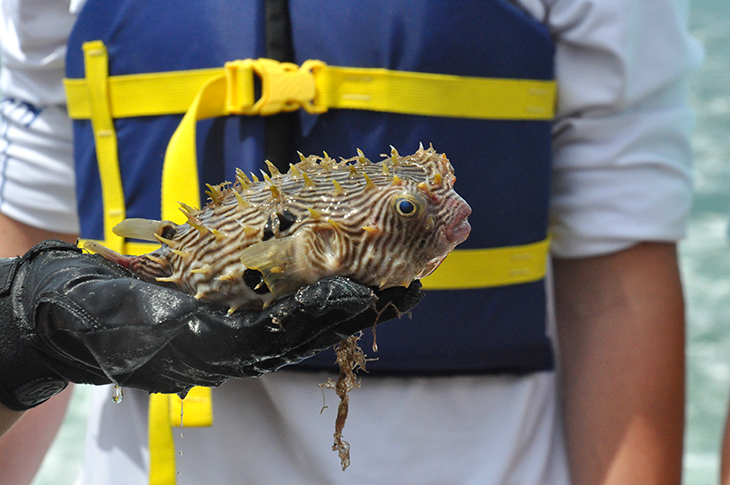 On the Bios II, students trawl for, document and release sea life that includes scorpionfish, sea urchins, blue craps and this striped burrfish.

In the 45-minute cruise to the destination, amongst breakfast snacks of Dunkin’ Donuts and pastries, students took selfies, discussed summer plans, and weighed options for marine science internships, jobs and graduate school. Of course, small talk devolved to regular collegiate conversation — parties from the night before, campus housing and assignments due on Monday.

Of the 19 students, 17 were women, nearly typical of the demographics of marine science majors and researchers internationally.

Trawling is no different than fishing. Find a site that looks promising and work like crazy to deploy the gear. And then wait, and wait some more. After a while retrieve the gear, deal with the catch (if any) and then try it all over again.

The Bios II utilizes an otter trawl, a rectangular, bottom-trawling net that includes a turtle excluder so that turtles and large fish can escape. The first trawl was a jackpot. Amidst shells and seaweed the net overflowed with blue crabs, sea stars, sea urchins and lizardfish. A chorus of appreciation erupted as a student came up with a seahorse, only to be topped by the finding of a baby octopus.

But, the second trawl was a dud. A virtually empty net. A few shells. No sea stars, no urchins and not even any lizardfish. Perhaps the net didn’t set right, or maybe the crew hit a dead zone. Either way, it called for a third trawl.

Fortunately, the third trawl, much like the first, overflowed with sea creatures. There were fewer sea stars, but more sea urchins. The highlights of the third trawl included three inflated burrfish, brittle stars, a flounder and a juvenile skate. 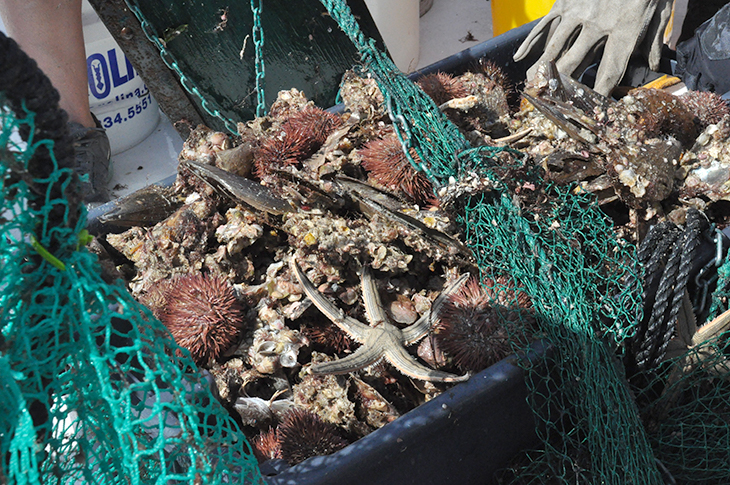 The Bios II utilizes an otter trawl, a rectangular, bottom-trawling net that includes a turtle excluder so that turtles and large fish can escape.

Starting this year Slattery and Ambrosio are building a dataset of organisms that are observed on trawling trips. The MAR 200 students will own the dataset and will be responsible for updating/tracking the data, which could prove to be invaluable for researchers studying the health and diversity of species in Tampa Bay.

Slattery said he hopes students learn three main things after a day on the water. First, they learn how hectic boat work can be, as well as how much sitting around may be involved. Secondly, about the biodiversity of organisms in Tampa Bay. And thirdly, and perhaps most important, is that there are a ton of opportunities — like research on the Bios II — at UT, but it’s up to them to take advantage of each opportunity.

“This trip really gives students an introductory experience to marine science research,” Slattery said. “And it helps them to start thinking about what’s beyond the classroom experience.”

For more, see the story in its entirety in the Fall 2019 UT Journal. 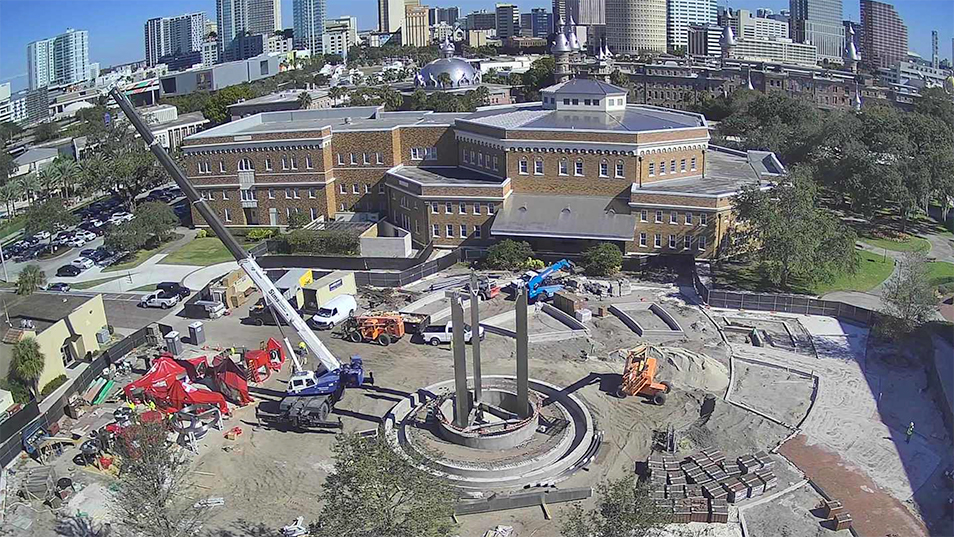 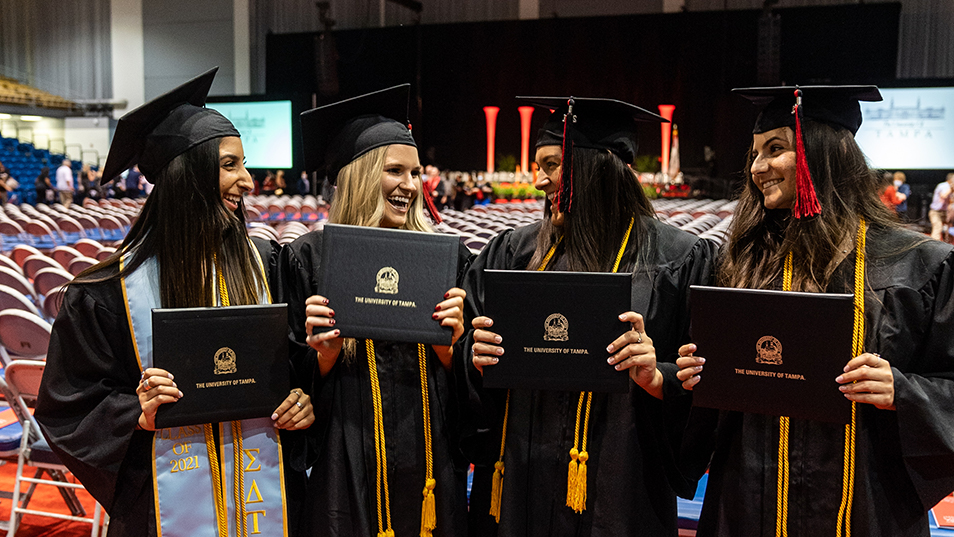 As this was the first in-person commencement since December 2019, UT alumni who graduated in Spring 2020, Winter 2020 and Spring 2021 were invited to walk the stage. 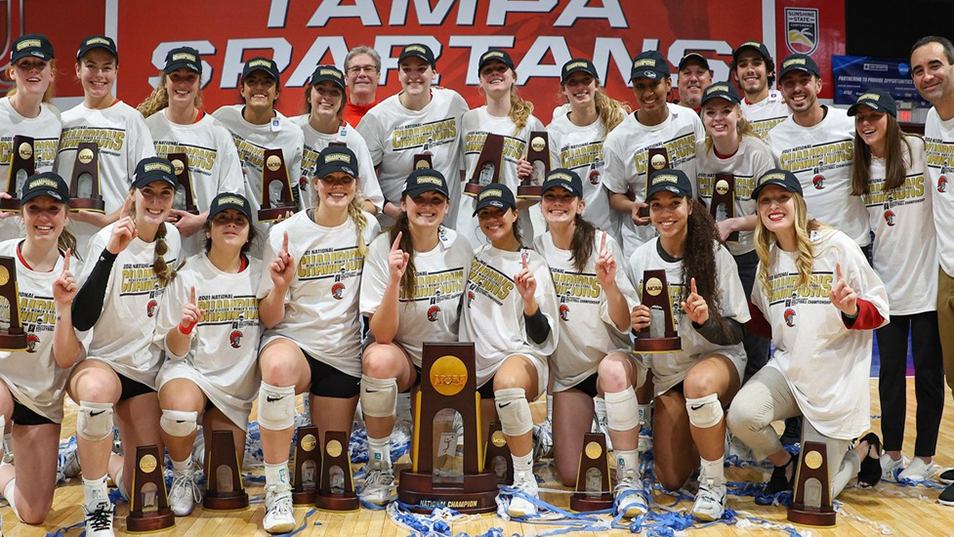 The No. 1 seed UT volleyball team played for the 2021 NCAA Division II national championship at home.