Zombies and the Apocalypse in Pop Culture

When it comes to American films, TV shows and books, you can’t escape zombies and talk of the apocalypse (insert evil laugh here).

But how much of these tales are based in truth? And what's behind this chilling fascination? Does it have something to do with our own inner psyche, or is it just pure escapism and entertainment? Two UT scholars weigh in on the boom of doom and gloom in pop culture. 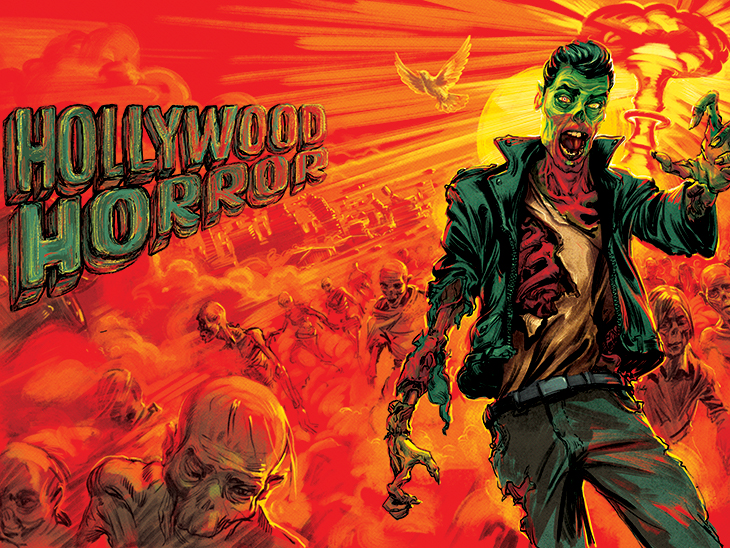 If you look up the word “zombie,” the Merriam-Webster dictionary defines it as “a will-less and speechless human (as in voodoo belief and in fictional stories) held to have died and been supernaturally reanimated.”

Here's a little known fact about Sarah Juliet Lauro, assistant professor of hemispheric literature in UT’s Department of English and Writing: She hates being scared and watching horror films.

She's also one of the few experts on zombies in the U.S.

“I know, that’s pretty strange,” she says. “But if you knew the history, you’d understand there’s a lot more to zombies than most people know. They didn’t start out as the monsters we’ve made them.”

If you look up the word “zombie,” the Merriam-Webster dictionary defines it as “a will-less and speechless human (as in voodoo belief and in fictional stories) held to have died and been supernaturally reanimated.” American books, TV shows and movies would have you believe that zombies are evil creatures who may hurt you. But many of them have it twisted, according to Lauro.

Her deep dive into the world of the walking dead — from her dissertation on zombies in print, film and television to her groundbreaking book, The Transatlantic Zombie: Slavery, Rebellion, and Living Death — has made Lauro a go-to source for interviews and podcasts, especially during the creepy Halloween season.

She’s now comfortable dishing on the topic, because it gives her a chance to set the record straight with historical perspective. “All I did was peel back the wallpaper and look at the origins,” she says. “And by doing that, zombies aren’t so scary anymore.”

Lauro’s own history might explain her obsession with the folklore of corpses revived by witchcraft. She grew up in Africa, where her father worked in the public health field during the AIDS crisis. Living in a different continent meant she wasn’t exposed to American pop culture. Instead, her perspective on zombies was influenced by the African belief that your enemies could steal your soul and use it for labor indefinitely, even after death. 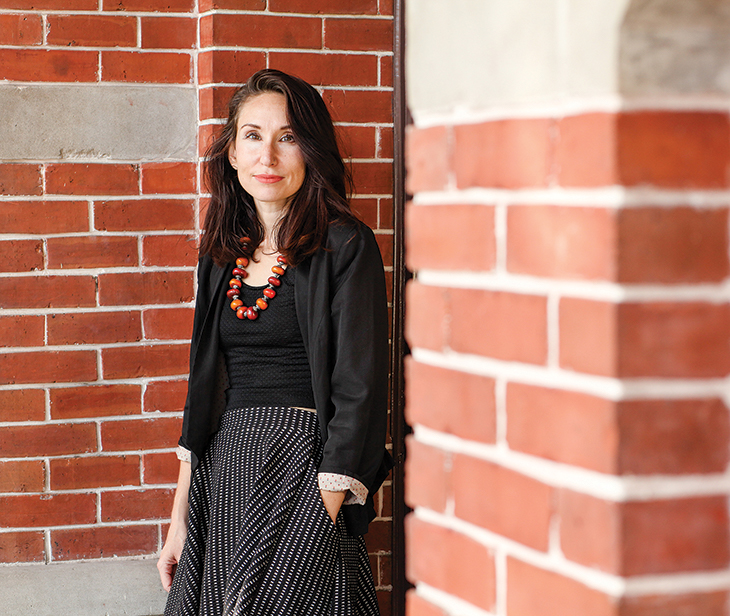 Sarah Juliet Lauro, assistant professor of hemispheric literature in UT’s Department of English and Writing, is one of the few experts on zombies in the U.S.

In other words, the zombies weren't the bad guys. “They were more to be pitied,” Lauro says. The villains were the ones stealing souls.

This mythology traveled with the transatlantic slave trade, taking root in the Caribbean in the French colony now known as Haiti. That’s where the witch doctors used powerful potions made of natural venoms and poisons from the land, drugging people to mess with their minds and make sure they'd do whatever they were asked. Then they were put to work doing menial labor in the fields. Though they may have been so out of it that they looked like dead people who had come back to life, that wasn't the case. “These weren’t flesh-eating cannibals. They were compliant servants,” Lauro says.

When U.S. troops occupied the island country in the early 1900s, they were intrigued with these fantastical stories and brought them back to America. One writer gave them a vivid description: dead men walking in the cane fields. “That’s when Hollywood got very interested,” Lauro says. “The idea of a walking corpse was made for the big screen.”

Thus began the morphing of the zombie. The film, White Zombie, starring Bela Lugosi, set the pace, coming out in 1932. It told the story of a young woman's transformation into a zombie at the hands of an evil voodoo master.

Then came George Romero’s film, Night of the Living Dead, now a cult classic. “That was the biggest turning point,” she says. “To this day, fans give him all the credit as the zombie founder, even though the legend was there long before his movie."

These days, you'll find a wide variety of zombies in fictional form. Some are plagued with viral infections and others are zapped by radiation. There are flesh-eaters and brain-feasters, bloaters and floaters, and coughers and leakers. You’ve got zombies who shuffle and amble, and sprinters and marathon runners.

And you can’t discount the ones who provide comic relief, like the stars of Shaun of the Dead and Zombieland. Lauro’s personal favorite in the zomedy department? “Hands down, Bill Murray,” she says of the Dead Don’t Die star.

Though the post-apocalyptic AMC television series The Walking Dead (currently in its 10th season) has a huge fan following, Lauro is not among them. “I think I stopped watching around the third season,” she says. “Too gory, too dark.” Even a zombie expert has her limits.

When times get tumultuous, we get anxious — and then prepare for the worst.

But Amanda Firestone, assistant professor of communication in UT’s Department of Communication, thinks we should relax. Humans have been predicting the end of the world since the beginning of time (“even way before the Bible,” she says), and we’re still here. 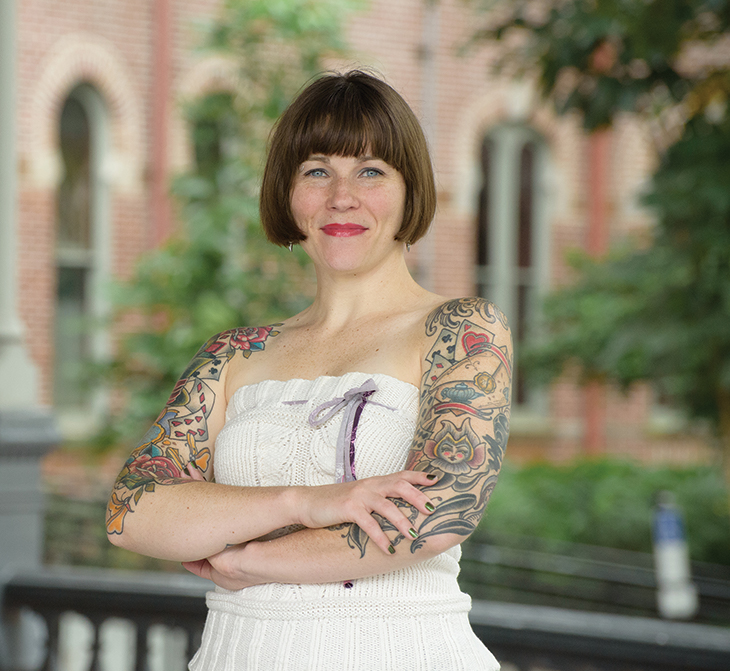 Amanda Firestone, assistant professor of communication in UT’s Department of Communication, said humans have been predicting the end of the world since the beginning of time (“even way before the Bible,” she says), and we’re still here.

Firestone was invited to participate in Leisa A. Clark and Mary F. Pharr’s Of Bread, Blood and The Hunger Games: Critical Essays on the Suzanne Collins Trilogy. That piqued her interest in the apocalypse, and the three of them went on to edit the book, The Last Midnight: Essays on Apocalyptic Narratives in Millennial Media. Her scholarly interest in the topic has led to writing projects, speaking engagements, courses and ongoing research.

When did apocalyptic thinking begin?

Firestone points to The Epic of Gilgamesh, the Sumerian/Babylonian poetic work. This predates Homer’s writing by 1,500 years.

It recounts the story of the sage Utnapishtim, who is warned of an imminent flood that will be unleashed by wrathful gods. He builds a vast circular boat that carries his relatives, grains and animals. After enduring days of storms, Utnapishtim — like Noah in Genesis — releases a bird in search of dry land. That dire tale may have been one of the first explanations of a large-scale environmental crisis that triggered a sense of doom and gloom.

“Yet in the midst of all that anxiety, there was hope,” Firestone says. “And that’s a constant we still see today. If you have hope, you can come out of the darkness and into the light, no matter the obstacles in front of you. When everything crumbles around you, there’s always a solution, somewhere.”

Of course, though, there’s an element of truth in doomsday predictions. Beyond the current problems we face, the ones coming in the future could be even more dire.

In about 5 billion years, according to the BBC, the sun is expected to expand and become a swollen star called a red giant. And 7.5 billion years in the future, its surface will be past where the Earth’s orbit is now. So, someday, the expanding sun may engulf and destroy the Earth.

Exactly how much hope we should have is a topic that’s up for debate.

There are a few interesting theories on why some people fixate on the end times.

One argument is that it’s a natural part of the human condition. “From the beginning, there’s always been an undercurrent of folks who don’t have the same existence,” Firestone says. “They’re marginalized and oppressed along class, racial or gender lines. They will always have less,” she says. “Simply put, your utopia is someone else’s dystopia.”

Another is that ancient cultures and religious groups have long embraced the end times, according to Firestone, because it helps provide a foundation to belief systems. The notion that the world is finite and there’s something else beyond this existence explains the inexplicable and keeps people on a righteous path.

And sometimes societal events can cause shifts in the way people think. On the surface, Invasion of the Body Snatchers — a 1956 movie based on a novel by Jack Finney about an extraterrestrial invasion in a fictional California town — may seem like pure entertainment and nothing more. But after being studied and researched “ad nauseum,” Firestone says, some critical scholars noted that the Cold War-era book and movie was a direct response to the anti-communist fervor and McCarthyism gripping the country.

“It’s the push-pull effect. You get pushed too far, and there’s going to be a pull back,” she says.

Firestone isn’t surprised that The Handmaid’s Tale, first published in 1985, was revived in 2017 as a television series streamed on Hulu. Based on the best-selling novel by Margaret Atwood, the story is set in the near future in Gilead, a totalitarian society in what used to be part of the United States. Gilead is ruled by a fundamentalist regime that treats women as property of the state, and is faced with environmental disasters and a plummeting birth rate. In a desperate attempt to repopulate a devastated world, the few remaining fertile women are forced into sexual servitude.

Firestone says The Handmaid Tale’s initial popularity and current resurgence reflects how a large number of women are concerned that the rights they’ve gained over the last few decades are being threatened by court cases and a shift in political power.

“Fiction gives us an opportunity to work through these emotions through made-up characters, giving us a safety net that it’s not really true. But maybe we can take away a few lessons,” she says. “If we’re that worried about acid rain, fight for the environment. If we see the erosion of laws that protect us, fight to save them. We don’t have to be powerless.”

Given her immersion in the world of uncertain times, how would Firestone describe her own mindset?

“Oh, I'm a very optimistic and positive person, tempered with a bit of realism,” she says. “I believe that when things are looking bad, they will eventually get better. In the end, humanity will always prevail.”