Maggie Palmore’s arm was raised in victory as applause from the crowd erupted around her. Palmore ’24 had just earned the title of 2022 National Collegiate Wrestling Association National Champion – the first wrestling national champion in University of Tampa history. 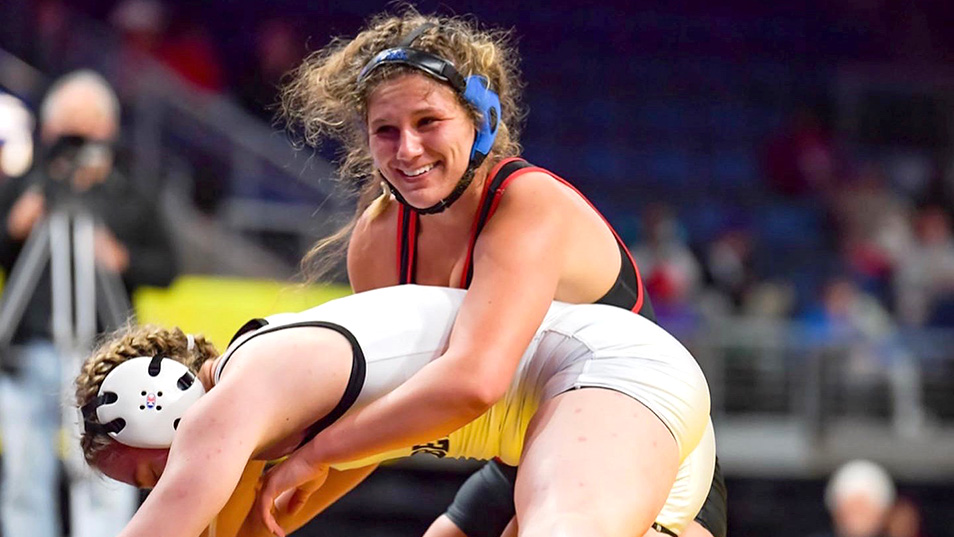 “(Winning nationals) feels really good,” said Palmore, who took the title at the tournament in Allen, TX, last month. “Especially because this is my first year (at UT), and it’s really cool because everyone is so supportive. People I don’t even know congratulate me and that just makes me feel so awesome because I just know that the community here at UT is really supportive and wants me to do well.”

Palmore, an entrepreneurship major originally from Potomac, MD, began wrestling in high school after watching her brother grow up playing the sport. What turned out to be a trivial joke between her friends turned into a passion and love for a predominantly male-dominated sport.

“A lot of people said I wouldn’t do it because there weren’t any girls on the team,” said Palmore. “That made me want to do it even more to prove a point. I just ended up liking it more than any of the other sports (I played) and decided to make it my main sport.” 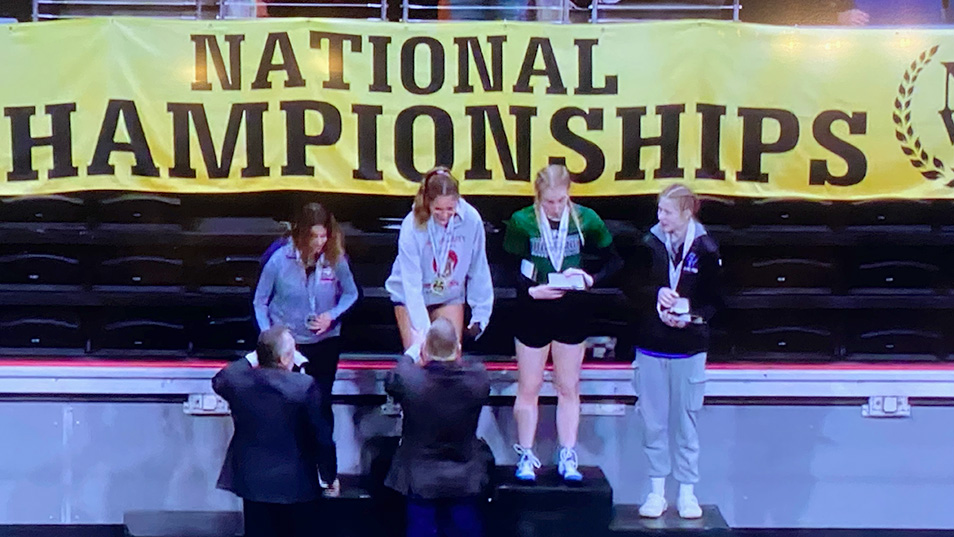 Wrestling not only provides Palmore with a great workout after practices and matches, but she also values the camaraderie that develops between wrestlers. Photo courtesy of Maggie Palmore '24

Palmore was an accomplished wrestler before coming to UT, according to her UT coach Robert McKnabb. She won nationals in high school, earned the title of captain on the boys’ team, and attended one of the best women’s programs in the nation, North Central College, before an injury ended her time at North Central.

The stars aligned perfectly for Palmore as she transferred to UT in Fall 2021 under the impression that her time wrestling had come to a close. However, she heard about UT’s club wrestling team and decided to get back involved with the sport she so loves. Palmore met with McKnabb prior to starting on the team to discuss her concerns regarding her past injuries. She started slowly with training and practice, according to McKnabb, and over time her attention to technique-detail improved significantly.

Besides Palmore’s wrestling skills and knowledge improving over time, her confidence in herself and her abilities has grown the most. She feels comfortable enough to throw herself in the ring and wrestle anyone, which ultimately made her very well prepared for the national tournament.

There were more than 150 teams competing in the tournament. Palmore was seeded sixth and was seen as the underdog to anyone other than her teammates since she had never competed in that tournament before. In just 50 seconds, Palmore pinned the fourth-seeded wrestler, and she pinned the first-seeded wrestler in three minutes and 52 seconds in the semi-finals.

Wrestling not only provides Palmore with a great workout after practices and matches, but she also values the camaraderie that develops between wrestlers. Palmore said the relationships she built with her teammates is unlike anything else, as they all want to see each other do well.

“After you get a win that you have been working towards and you get to hug your team after, that feeling is unlike anything else,” said Palmore. She hopes and encourages more girls join the club wrestling team to build an even greater wrestling community at UT.

While women in wrestling is growing more common, there are still adversities to overcome. According the Palmore and McKnabb, there are not many opportunities for women to have both a good education and be able to wrestle, which is one of the reasons UT is so special to her.

Palmore is beyond grateful for the opportunities and support system built by UT’s team, coaches, referees and supporters.

“The final few seconds of the match, you could see her smile and the joy of accomplishing the goal of a national championship had come to fruition,” said McKnabb. “(I felt) nothing short of immense pride watching an amazing young woman overcome so much in her career to become the best in the nation.”