The No. 1 seed University of Tampa volleyball team played for the 2021 NCAA Division II national championship at home, capturing the program's fourth national title following a 3-0 sweep over Washburn University. 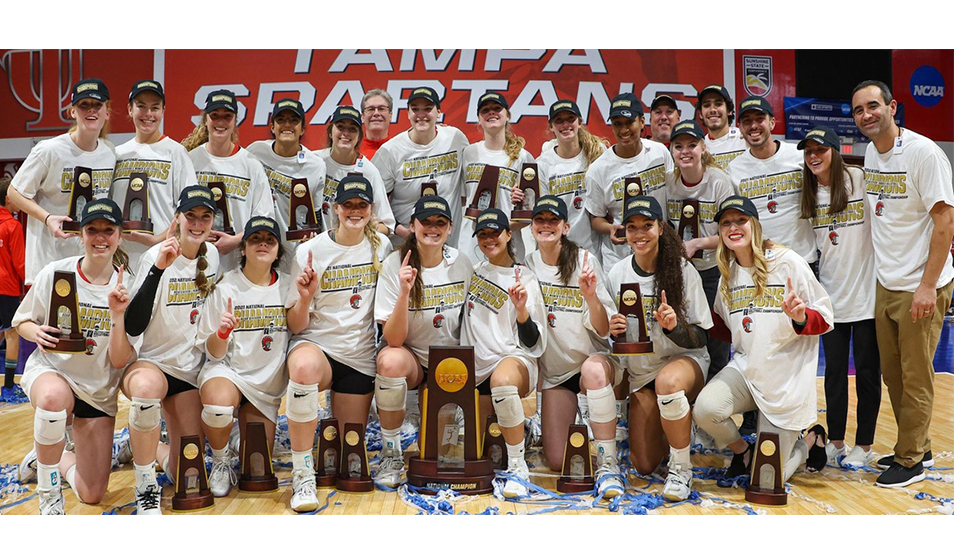 First Set: Tampa forced an early Washburn timeout with a 13-9 UT lead. The Spartans would hold a slim lead for the remainder of the set, leading by as many as five points on four occasions. The Ichabods came within three points, 20-17, prompting a timeout from UT head coach Chris Catanach. Tampa came out of the timeout with a pair of kills to lead 23-17. The Spartans would close out the opening set with a pair of kills from All-American Katie McKiel. Score: 1-0 Tampa

Second Set: The story of the second set was a Spartan offense that hit .447 with no errors. Washburn would hit .234 in the set, and pushed the Spartans to the brink as the Ichabods had match point with a 24-23 advantage. In a set where neither team led by more than two points, Tampa kept momentum in the match as it scored the final three points of the set behind kills from Sierra Rayzor and Sorrel Houghton, followed by an attack error by Washburn on set point for the Spartans. Score: 2-0 Tampa

Third Set: With the national championship within reach, and furious support from its home crowd, the Spartans answered the call with 18 kills to go with a .429 hitting percentage in the third set. A 1-0 lead was the lone lead for the Ichabods in the set, with Tampa pushing its advantage to five at 21-16 on a block by Rayzor and McKiel. Following a Washburn timeout, McKiel pushed the Spartans closer to the victory with a kill to make it 22-16 Spartans. Washburn would respond with three straight points, trimming the UT lead to 22-19 and leading to a UT timeout. The teams would trade points out of the timeout. Following a McKiel kill, Tampa had its first match point at 24-21. Rayzor took the serve, and the Spartan defense regained possession for a kill from freshman Kalli Corrs on match point to win the match, and the title for Tampa. Score: 3-0 Tampa