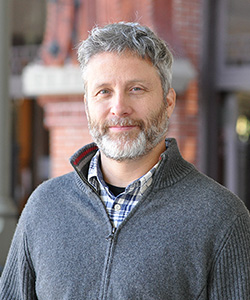 Simon Schuler specializes in determining the compositions of various galactic stellar populations using high-resolution optical and near-infrared spectroscopy. He analyzes the compositions of stars in order to better understand stellar physics, nucleosynthesis, the chemical evolution of the galaxy and chemical signatures of planet host stars.

Schuler has an active research program involving UT students, as well as graduate students at other universities. He currently holds a grant from NASA to study the chemical compositions of stars hosting planets discovered by NASA's incredibly successful Kepler space telescope, whose mission goal is to discover Earth-like planets around solar-like stars in the galaxy. Schuler is looking for differences in the compositions of stars with planets and those not known to have planets to identify possible signatures of the planet formation process. He has published eight peer-reviewed papers in the leading astronomical journals and has presented numerous posters and talks on the subject.

In addition to work on stars with planets, Schuler also studies the compositions of stars in open clusters, collections of stars that formed contemporaneously from individual molecular clouds, making the stars in each cluster chemically homogeneous and coeval. Because the stars in open clusters have masses that range from the lower stellar mass limit up to many times the mass of the sun, open cluster stars are ideal for studying how stars of different mass evolve with time, as well as other mass-dependent stellar physics. His work with open clusters has been published in numerous peer-reviewed journal papers.

Schuler is an active member of the American Astronomical Society and the International Astronomical Union, regularly attending national and international conferences. He is currently sitting on the Science Organizing Committee of the forthcoming international conference on Characterizing Planetary Systems 2014. He regularly referees papers submitted to the leading astronomical journals and sits on grant allocation committees for NASA and the NSF. He also is an instructor for the Hillsborough Scholars Summer Academy, a summer program designed to immerse local middle school students in a variety of scientific activities.