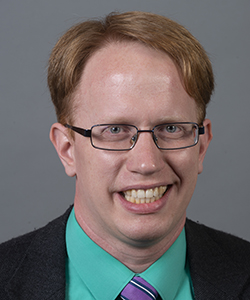 Steven Mollmann’s scholarship focuses on the impact of science on fiction, especially British literature from 1800 to the present, and children’s literature. He is also invested in the teaching of academic writing and writing program administration.

Mollmann’s research on 19th-century literature and science has appeared in journals English Literature in Transition, the Gaskell Journal and Science Fiction Studies. He has also written about Indian science fiction for the Journal of Commonwealth and Postcolonial Studies, and is currently at work on a book project about 19th-century British literature featuring scientists.

Mollmann has written about science fiction for popular venues such as the Tor.com blog, Unreality SF and Sense of Wonder (a science fiction textbook). He has also co-authored several works of Star Trek fiction.

Mollmann was one of the 2015 recipients of the R. D. Mullen Research Fellowship, awarded by Science Fiction Studies. He was also the 2010 recipient of the M. Thomas Inge Award for Comics Scholarship, presented by Popular Culture Association, for the best paper in the comics track at the PCA’s annual meeting.