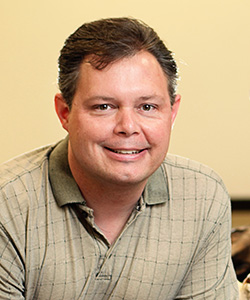 Mason Meers specializes in organismal level evolutionary biology, specifically, the study of the evolution of tetrapods on the morphological and population levels. This work encompasses biomechanics, morphometrics, phylogenetic systematics and ecology.

His current research focuses on the evolutionary locomotor biomechanics of crocodilians (alligators, crocodiles and gharials) in an effort to infer degrees of terrestrial habitat use and the evolution of different locomotor modes found among crocodilians.

He also is conducting on-going research on cranial morphometrics of American alligators, both evolutionary and ecological in nature, focusing on the effects of current conservation practices. Other on-going projects focus on the biomechanics of theropod dinosaur teeth and feeding, the biomechanics of prehensile tails in tetrapods and some descriptive work on fossil non-avian dinosaurs from the Northwest.

He is the editor of The Bibliography of Crocodilian Biology and has published articles in the Journal of Vertebrate Paleontology, Journal of Zoology, London and other journals.

Meers is a member of the Society of Vertebrate Paleontology, the Society for the Study of Amphibians and Reptiles, and the American Society of Ichthyologists and Herpetologists.

He also belongs to the IUCN Crocodile Specialist Group, and is a faculty member of the American Zoo and Aquarium Association's Crocodilian Biology and Captive Management School. He has provided consulting for numerous television documentaries, museum exhibits and public educational program.