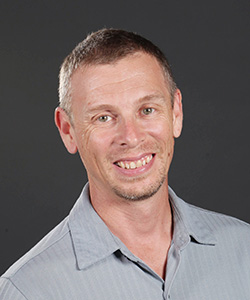 Rob Masserini's primary research focus involves the application of analytical chemistry to elucidate the biogeochemical cycling of macro-nutrients (phosphate, nitrate, nitrite, ammonium and silicic acid). He uses three different approaches to capture nutrient events on varying scales. The first approach employs a ship-based high-resolution high-sensitivity fluorescence based analyzer that he developed. This analyzer is coupled to a pumping system and is used to delineate nutrient-enriched regions. The second approach is to collect discrete water column samples and measure the nutrient concentrations using absorbance based chemical analysis. The nutrient concentrations are then used for time series and hydrographic analysis and mapping. The third is a mooring based high-temporal resolution low-sensitivity UV-nitrate sensor for quantifying nitrate input. Such a system was installed on The University of Tampa’s dock in December 2008 and generates real-time data which is automatically posted on the Web. Episodic nutrient fluxes such as those induced by hurricane and tropical storm derived rainfall, are difficult to capture with discrete measurements. Monitoring of sporadic nutrient fluxes with high resolution instrumentation can advance our understanding of complex marine systems and processes affecting riverine nutrient fluxes. Determination of the temporal and spatial distribution of limiting components for phytoplankton growth is of great importance. If one substance is the limiting ingredient for phytoplankton growth and we can accurately determine its distribution and other important cofactors such as light and temperature, it should be possible to model and predict the distribution of phytoplankton stocks within systems. Nitrogenous nutrients usually limit marine phytoplankton biomass. Ammonium is the nitrogen nutrient preferred by marine microorganisms that form the base of the oceanic food web. These tiny organisms are major participants in the removal of atmospheric carbon dioxide via carbon fixation through photosynthesis and are responsible for roughly half of the oxygen produced on the planet. Because their photosynthesis is concentrated in the ocean’s thin euphotic-zone, euphotic-zone nutrient concentrations often become depleted, and the identification of replacement processes for euphotic-zone ammonium become very important. An analytical system that can detect nanomolar concentrations of ammonium over month long deployments would be a significant step toward clarifying the mechanisms that govern nutrient events, which ultimately control phytoplankton primary production. Existing ammonium detection techniques that have the requisite sensitivity do not correct for natural background fluorescence of the sample. Reverse flow injection analysis (rFIA) methodology can be used to account for a sample’s inherent background fluorescence. Therefore, Masserini's latest research efforts center on developing a sensitive rFIA technique that has the necessary reagent stability for long term deployments.

Masserini, R.T. Jr. and Fanning, K.A., 2000. A sensor package for the simultaneous determination of nanomolar concentrations of nitrite, nitrate, and ammonia in seawater by fluorescence detection. Marine Chemistry 68: 323-333.

Subject: Method for Measuring Nitrite and Nitrate in Aqueous Medium