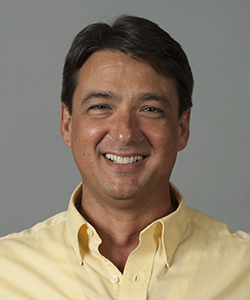 Carastro earned his doctorate in biochemistry and molecular biology, and had postdoctoral training in human gene expression and molecular oncology. Before coming to The University of Tampa in 2006, he was an assistant professor at the Pennsylvania State University-College of Medicine. In addition to his current faculty position at UT, he has held an appointment as affiliate member at the Moffitt Cancer Center since 2007.

Carastro's earliest research work was in DNA replication and gene expression (Carastro et al 2002; Lu et al 2002). As a postdoctoral fellow, he investigated the molecular mechanisms regulating expression of tumor suppression genes, including p53 (Strudwick et al 2003) and prohibitin (Joshi et al 2007). After joining the UT, he received funding from the National Cancer Institute for his research on the vitamin D receptor (Roff et al 2010). More recently, he published research findings describing a protective role, in prostate cancer, for a mutation in the p73 tumor suppresser gene and providing evidence for a molecular rationale explaining this phenomenon (Carastro et al 2014). The current focus in Carastro's research group is on prostate cancer and tumor suppressor genes. Emanating from this current focus, there are ongoing projects in Carastro's research laboratory: (1) defining the molecular mechanism(s) of underpinning the chemopreventative effect of a standardized green tea extract (Polyphenon E) against prostate cancer, (2) elucidating the CpG methylation patterns in the p73 gene promoter and investigating the epigenetic role of CpG methylation in regulating expression of p73 N-terminal isoforms, TAp73 and deltaNp73, and (3) developing novel, sensitive detection methods utilizing liquid chromatography-tandem mass spectrometry (LC-MS/MS) methodologies to differentially detect and quantitate the TAp73 and deltaNp73 protein isoforms.

Carastro has memberships in, and is actively engaged in, professional societies for his field of scientific expertise. He has been a member of the American Society for Biochemistry and Molecular Biology (ASBMB) since 1997, and the American Association for Cancer Research since 2003. In 2015, he was appointed as an ASBMB Educational Fellow.