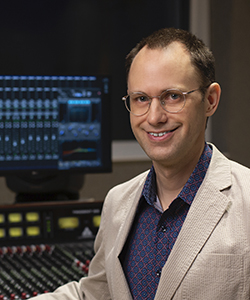 At The University of Tampa, Blackburn directs the music technology and composition program, coordinates the contemporary performance area and teaches all levels of music theory. His compositions have been presented at peer-reviewed national conferences such as the Society for Electro-Acoustic Music in the United States, the Electronic Music Midwest festival and the Electroacoustic Barn Dance festival. He has organized and curated performances of new music, music technology and contemporary music for the Tampa Bay community through the Minaret New Music concert series, the UT Annual Composer Festival and the Synergy concert series. As a music technologist and music theorist, Blackburn has presented his research internationally in South America and Europe, including the Brazilian Symposium on Computer Music and the Raflost festival in Reykjavik, Iceland. In addition to his professional work as a composer, his discography includes album credits with Centaur Records as a recording/mastering engineer.

Blackburn’s doctoral dissertation explores the music of Harry Partch using replica instruments that he built following his research at the Harry Partch Institute in Montclair, NJ. Blackburn has presented his Partch research at the 50th National Conference of the College Music Society in 2007, the Harry Partch Legacy Symposium and Festival at New England Conservatory in 2012, and the International Conference of the College Music Society in Bruges, Belgium, in 2019. His research interests also include traditional Chinese instrumental music, and performance studies on dizi, erhu, sheng and guqin. In 2015, while on sabbatical in Taiwan, he studied guqin with Shiou-Shiang Su (蘇秀香).

For the music technology and composition program at The University of Tampa, Blackburn created the technologist track of the B.A. in Music degree and an array of music technology and contemporary music curricula including the Interactive Arts Ensemble, Studio Production Ensemble, Concert Recording Practicum, MIX Lab ensemble and performance studies in Contemporary Technology. Blackburn also updated and expanded the core music technology courses at UT, Recording and Electronic Music I and II, to provide a comprehensive foundation in experimental electronic music and audio production for music technology students. From 2008-2020 he coordinated/mentored the recording and archival of over 1,000 Music Department recitals, master classes and concerts at UT.

Blackburn's compositions have been presented in radio broadcasts, national and international peer-reviewed festivals, performed by professional ensembles, and commissioned by solo artists and choreographers. His music has won awards and honors, including an ASCAP Fellowship for Film Scoring and Composition at the Aspen Music Festival. In support of his creative scholarship and teaching, he has been awarded several David Delo Research Professor Grants from The University of Tampa for “Development and Creative Implementation of a Wearable Body Sensor Rig for Interactive Electroacoustic Music Performance” (2010), “Xenharmonic/Electroacoustic Music Research, Composition, and Performance with the Haken Continuum Fingerboard” (2012), and “Performance Practice Research on the Chinese Guqin, and its Application to Electroacoustic Music”(2014). Blackburn’s chamber music work Chimera, performed by NOW Ensemble, was released on CD by Navona Records in 2020.