Recording a Memorable Moment in History

By Dave Seminara
Photographs Courtesy of The Henry B. Plant Museum 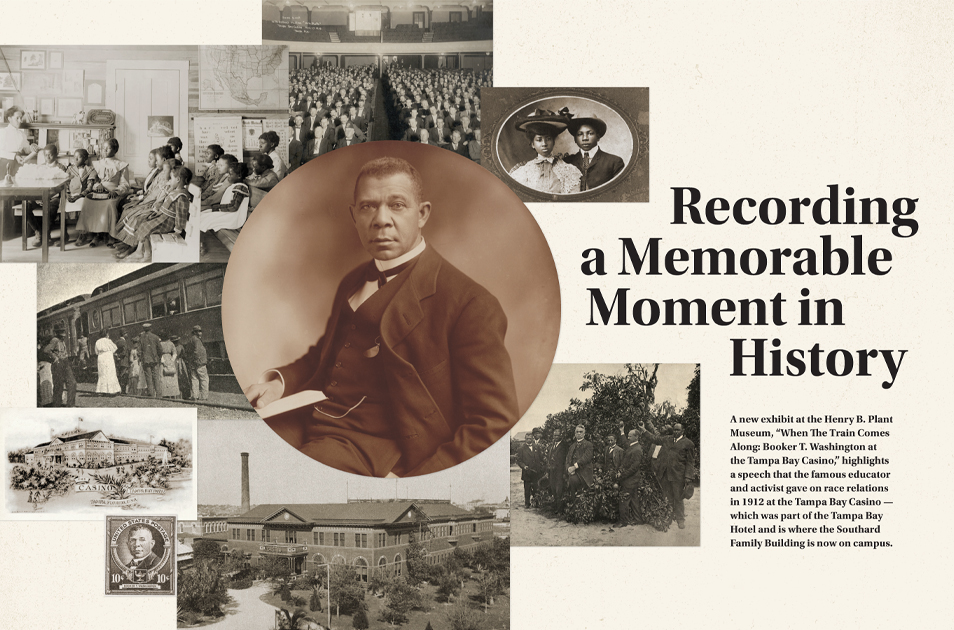 On March 4, 1912, almost two decades before UT was founded, educator and activist Booker T. Washington gave a speech on race relations to a white, Black and Latin crowd at the Tampa Bay Casino.

At the time, the casino was part of the Tampa Bay Hotel and contained a theater for artistic performances and speeches. It was located on the east side of what is now UT’s campus, near the river, where you’ll find the Southard Family Building.

This chapter of local history from the Jim Crow era had been mostly forgotten until the Henry B. Plant Museum created an exhibit dedicated to this speech, which was one of several that Washington gave during a train tour through Florida.

On display through Dec. 23 and guest curated by Charles McGraw Groh, associate professor of history at UT, the exhibit uses the speech to examine segregation politics and Black community-building in Tampa, as well as encourages a vital public discussion about the roots of racial inequality.

Booker Taliaferro Washington was born into slavery in Virginia in 1856. In 1881, at 25, he was the founder and first president of a school for Black students, the Tuskegee Normal and Industrial Institute in Alabama.

As he would later describe it in an 1896 essay in The Atlantic, the school started “in a small shanty and church, with one teacher and thirty students, without a dollar’s worth of property.” At the time he penned the piece, the school had grown to 79 teachers and 800 students from 19 states. Now called Tuskegee University, the school has 3,000 students from more than 30 countries.

Washington’s guiding principle was in Black advancement through practical, industrial training and education. His conviction was that race relations would improve, “as the Black man, by reason of his skill, intelligence, and character, can produce something that the white man wants or respects in the commercial world.”

Washington rose from obscurity to stardom in 1895, when he delivered an electrifying speech to a mixed audience in Atlanta at the Cotton States and International Exposition. He urged Blacks to make the South their home and argued that whites should see Blacks as an economic resource, rather than a threat.

He became the first Black person to dine at the White House (with President Teddy Roosevelt) in 1901. By 1912, when he spoke at the Tampa Bay Casino, Washington was, arguably, the most influential Black man in America. 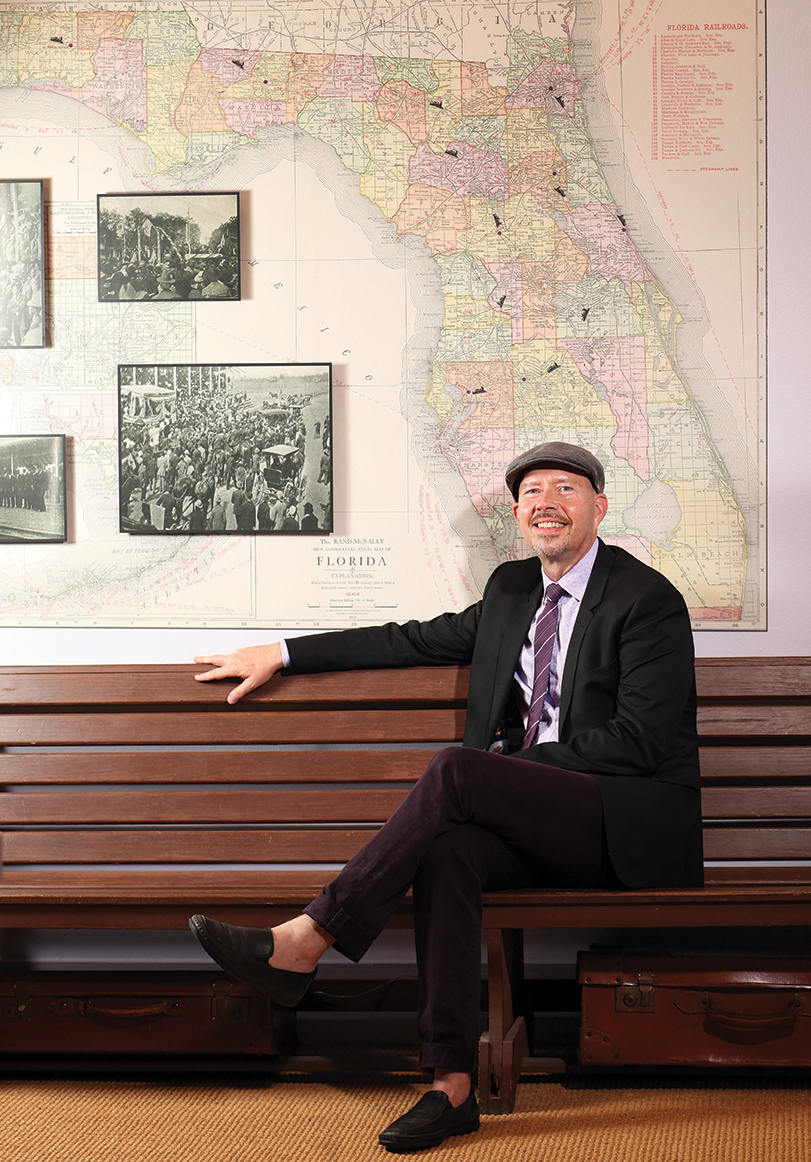 "Whites and Blacks heard different things from the speech, but they were both encouraged to work together. And that message is more important and necessary now than ever."
-David H. Jackson Jr.

His Tampa speech was part of a multi-city tour of Florida that included stops in Pensacola, Tallahassee, Lake City, Ocala, Lakeland, Eatonville, Palatka, Daytona and Jacksonville. The trip was organized by the Florida branch of the National Negro Business League. Washington, who was 55 years old and in poor health at the time, traveled with a caravan of other prominent Black leaders, in a private railcar, as Blacks weren’t allowed to ride with whites.

WHEN THE TRAIN COMES ALONG

The Henry B. Plant Museum’s exhibit that’s dedicated to Washington’s Tampa speech, “When the Train Comes Along,” is named after a folk song that is representative of the songs that were performed at the event.

The exhibit is the brainchild of guest curator Charles McGraw Groh, associate professor of history at UT. With plenty of help from the museum’s executive director, Cynthia Gandee Zinober, and curator, Susan Carter, as well as a big hand from the Library of Congress and descendants of prominent Black locals, Groh put together a fascinating snapshot of what Tampa was like at the time. He’s been conducting research on Black community roots and institutions in Tampa for a few years and decided in the spring of 2020 to turn this research into an exhibit.

How it all began: Last summer, Gandee Zinober contacted the editor of the local Black newspaper, the Florida Sentinel Bulletin, to seek photos and memorabilia from the era. An article was then written in the newspaper.

A local woman who was nearly 100 years old at the time passed the article to a friend who is the niece of J. Andrew Williams, a prominent Black entrepreneur who co-founded a cigar company that sold tickets for the Tampa speech. Groh conducted an oral history with her son, Bentley Plummer, who provided a number of evocative photographs and other mementos from the time that are featured prominently in the exhibit. A trio of local Black churches – Allen Temple, Beulah Baptist and St. Paul’s African Methodist Episcopal – also pitched in to help tell the story of Washington’s visit to Tampa.

The exhibit shows that although Tampa was a place of vicious discrimination and legal segregation, it was also home to a vibrant and resilient Black community that made Washington’s visit happen. The displays shed light on some of these local and civic leaders, like Clara Frye, who started what became a thriving Black hospital from her home, along with groups like the Paul Laurence Dunbar Literary Society, which was founded by Black postal workers in 1910 to hold lectures on intellectual and moral improvement.

Groh’s research also revealed the involvement of a local Afro-Cuban social club, the Sociedad La Uniòn Martì Maceo, in organizing the event. He says their cooperation revealed deeper ties between those communities than many would assume. 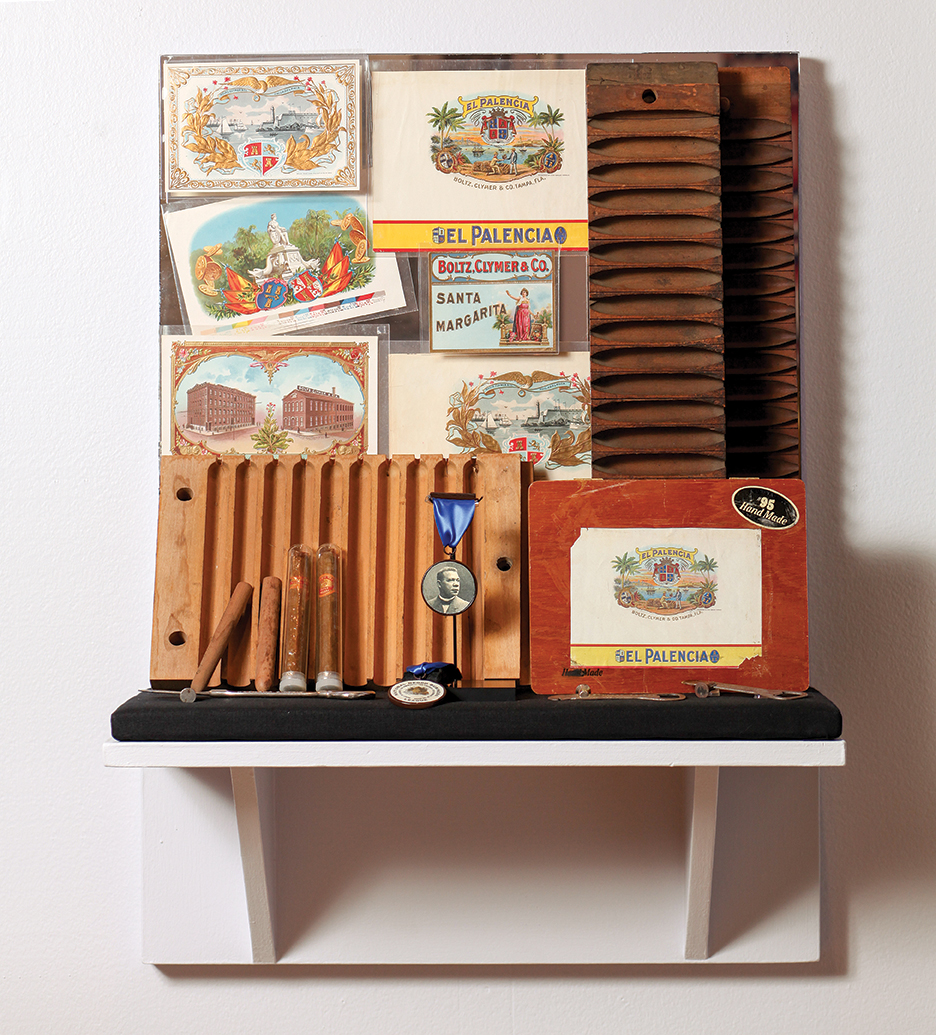 Washington celebrated the achievements of Black entrepreneurs in Tampa’s cigar industry. These artifacts are on loan from J.C. Newman Cigar Co. and University of South Florida Libraries. Photograph: Jessica Leigh

“As the Afro-Cuban community experienced more discrimination, they were reluctant to be lumped in with African-Americans,” Groh says. “But this (cooperation) was one of the first signs that they were making connections.”

In Tampa at this time, Black people were not allowed to stay at the Tampa Bay Hotel, so each member of Washington’s entourage stayed with local Black families. Washington stayed with a local pastor and his wife.

Although the seating was already segregated, with Blacks on one side and whites on another, casino staff installed sheeting to further separate the two communities. Before the speech, Washington insisted that the sheet had to go and got his wish. Some 2,500 locals turned up for the address, with many paying 50-75 cents per ticket.

Given the pervasive racism of the times, one might expect Washington’s address to be replete with legitimate grievances. But his surprisingly hopeful address focused on progress and a path forward.

Visitors to the exhibit shouldn’t miss the original typewritten text of Washington’s speech, reproduced on an iPad. He told the audience that Florida had a remarkably good climate, plenty of jobs that paid even more than whites made in the “Old Country” and an abundance of affordable land ripe for cultivation.

Washington warned against idleness and chided the media for distorting the progress made in race relations. “One living outside the South hears of the lynchings, the burnings and the work of the mob, but he rarely hears of what white people are doing in nearly every community in a state like Florida to help and encourage the colored people,” he said. “The worst that occurs between the races is flashed by telegraph all through the world, while the best that occurs is seldom heard outside of our immediate local communities. In no other part of the world can there be found white and Black people in so large numbers who are living side by side in such peaceful relations as is true in our Southern states.”

He closed his speech with a powerful appeal to come together. “There is not going to be a racial war,” he said. “There is going to be no emigration from the South. Both the Black race and the white race are going to live here, in my opinion, for all time in peace and harmony.”

After the speech, the Sociedad La Uniòn Martì Maceo hosted Washington for a Spanish dinner in the Ybor City neighborhood of Tampa. Cigars were provided by Williams, who “personified Washington’s vision of building a Black middle class,” says Groh.

That night, Washington felt unwell, and some in his entourage worried that he wouldn’t be able to complete his tour. But the next day, he felt well enough to tour Williams’ cigar factory before leaving town. 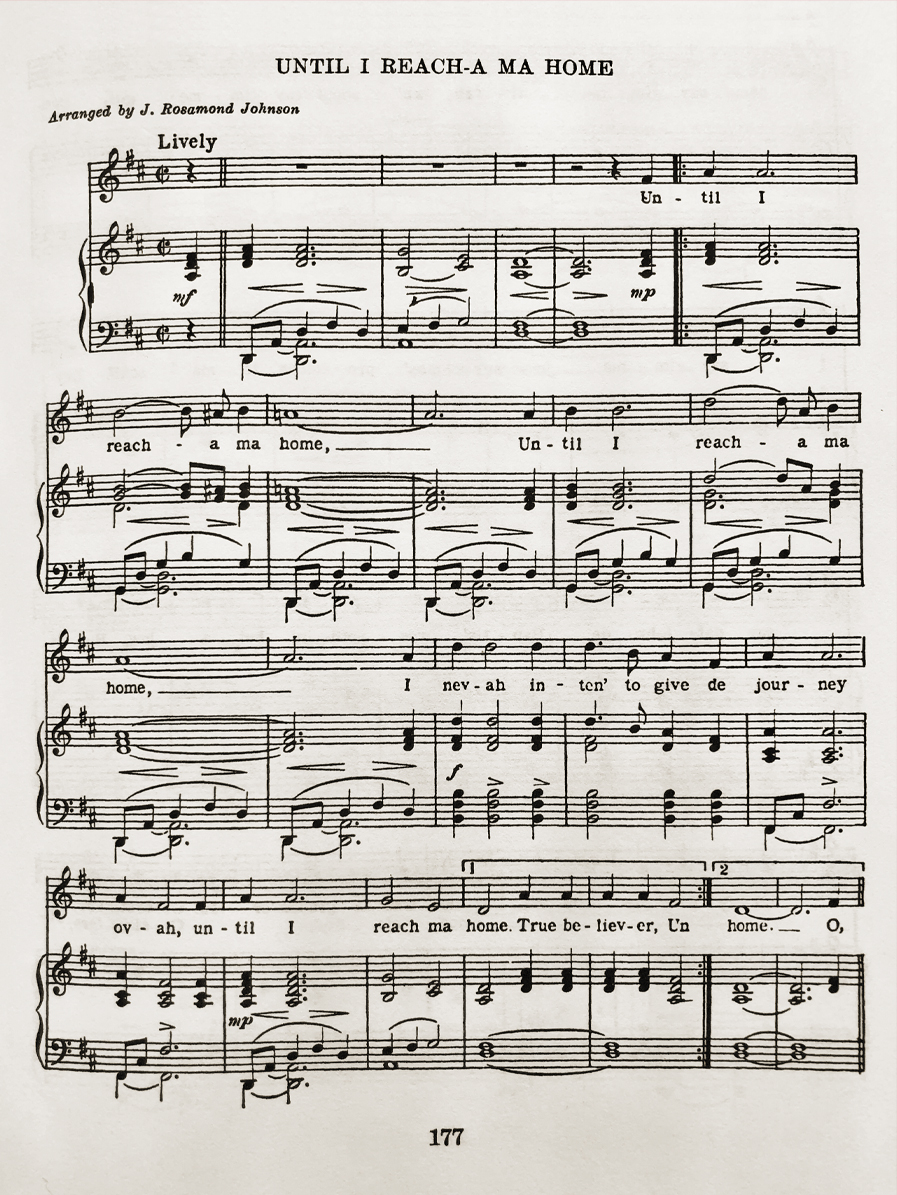 More than 40 students who make up the University Chorus – directed by Rodney Shores, lecturer in voice – studied and recorded two spirituals, which were sung during Booker T. Washington’s speech at the Tampa Bay Casino in 1912. You can watch the students perform them online at plantmuseum.com/exhibits/online-exhibits/music-and-memory.
Photograph: The Books of American Negro Spirituals

A MESSAGE OF UNITY

In a letter to a friend, Washington called his tour of the Sunshine State a “great success.” And most scholars agree.

David H. Jackson Jr., provost and vice chancellor for academic affairs at North Carolina Central University, wrote about Washington’s Florida tour in the Florida Historical Quarterly and believes that Washington’s message was one of Black nationalism, in that he encouraged self-sufficiency as a means of advancement.

Jackson also thinks that Washington was playing the long game by telling whites what they wanted to hear. “Whites and Blacks heard different things from the speech, but they were both encouraged to work together,” he says. “And that message is more important and necessary now than ever.”

At the time, Washington was competing for Black hearts and minds with a newer, more radical organization, the National Association for the Advancement of Colored People (NAACP). His critics maligned him as an accomodationist or even an Uncle Tom, but he called himself a constructionalist. Groh says even today, Washington is a misunderstood figure.

“There is a tendency to juxtapose him unfavorably with W.E.B. Du Bois,” he says. “But Booker T. Washington was very involved behind the scenes in financing court cases that were trying to restore civil and political rights for African-Americans.”

Washington coined the term ‘racial uplift,’ and wanted the Black community to look inward for improvement. “He really believed in capitalism,” Groh says. “He believed that middle-class success was going to help redefine the status of Black Americans.”

After Washington died of congestive heart failure in 1915 at the age of 59, members of Tampa’s Black community rented out the casino once again to host a memorial service for him.

Washington’s legacy lives on, particularly at Tuskegee University and in the many schools around the country that are named for him, including Booker T. Washington Elementary School in Tampa.

Henry B. Plant Museum curator Susan Carter hopes that his new exhibit “will open people’s minds to see who he was, what he did here and how important his message was.”

Emily Schurr ’21, who graduated this past May with a double major in history and musical theatre, first heard about an internship at the Henry B. Plant Museum through Charles McGraw Groh, associate professor of history and guest curator of the “When the Train Comes Along” exhibit.

He had been advising her on her senior research paper and suggested she apply. Schurr thought the internship sounded interesting since it had both historical and musical elements, and she was selected for the internship this past spring semester. Her largest project was designing the exhibit’s guide for children who attend with their families.

“They gave me past family guides and different educational resources to use,” says Schurr. “After 20 or so drafts, we finally settled on the completed guide that now sits in the museum. I learned so much about the educational side of museum life and how to make adult exhibits accessible to children.” 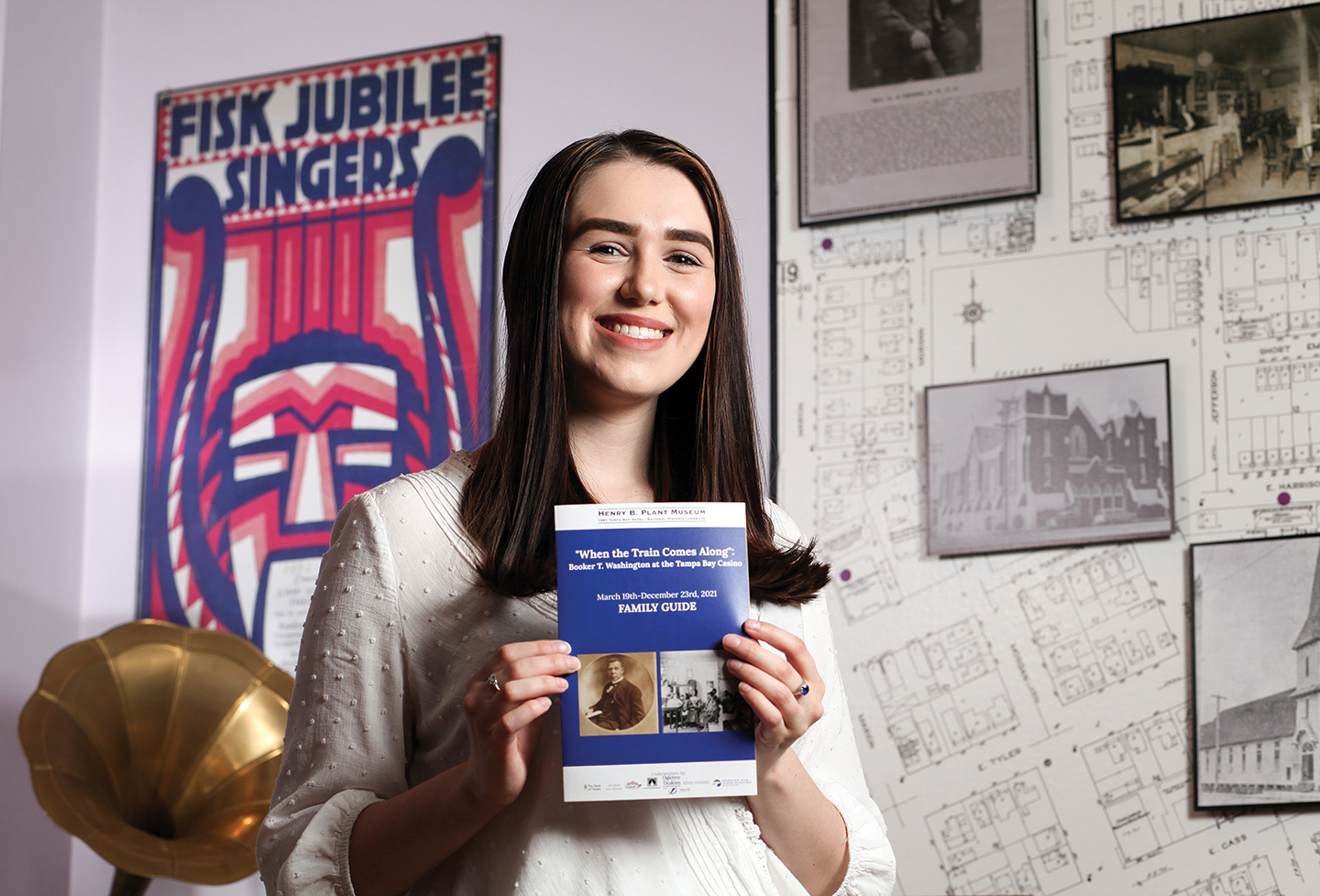 Emily Schurr ’21 designed the exhibit's guide for children who attend with their families.
Photograph: Jessica Leigh