The Alumni Association Board hosted the Alumni Awards Dinner on campus last May.

Spartans are no slouches, as you probably know. They tend to go full throttle at life, (over)achieving professionally, philanthropically and personally.

Last May, a few particularly successful UT graduates received recognition at the Alumni Awards Dinner hosted by the Alumni Association Board at the Vaughn Center on campus. Chosen through a highly competitive process, the honorees represent those who set a most impressive level of achievement.

Let’s meet them and learn how The University of Tampa served as their springboard to success.

A SPARTAN SERVING HIS COUNTRY 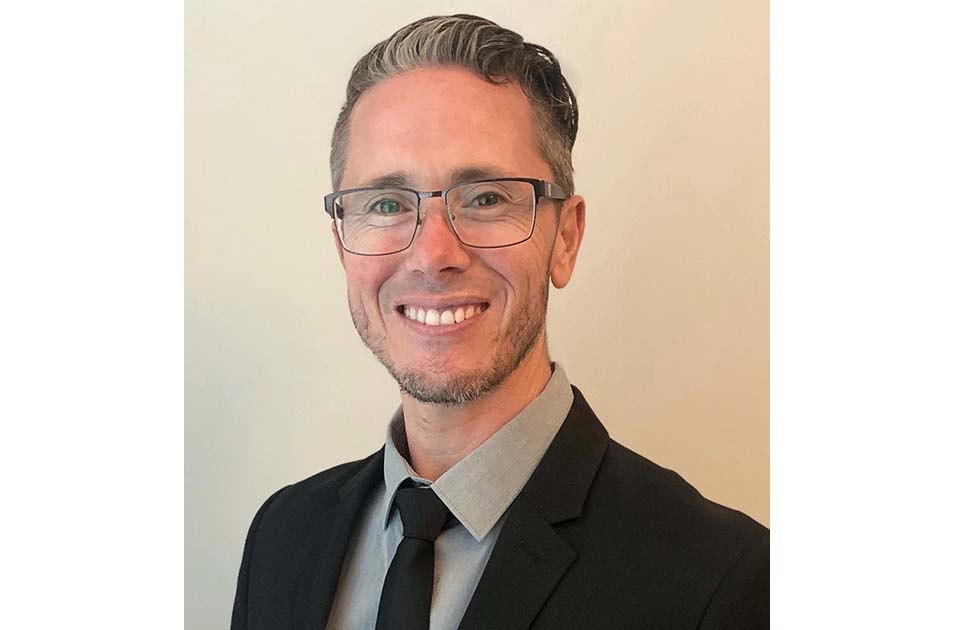 The recipient of the Alumni Achievement Award, Nando Quiñones ’04, doesn’t have a plain-vanilla career path. In fact, he has the kind of job that would bring dinner-party banter to a halt and elicit a response of “No kidding!” Working for the government, this Spartan has enough career laurels to fill a forest.

Quiñones is a special agent for the U.S. Department of Homeland Security, Homeland Security Investigations (HSI), and serves as a national program manager at the HSI Financial Crimes Unit in Washington, D.C. In addition, he protects some of our most vulnerable citizens by running the COVID-19 Financial Fraud Program and Elder Fraud Program.

Beyond all of this, Quiñones works on other dimensions of justice. He also prosecutes those who commit the fraud and serves as a liaison to the Department of Justice Criminal Fraud Division and Consumer Protection Branch.

His path to this crime-stopper role began during his days studying criminology and criminal justice at UT. There, his professors encouraged him. “They wanted us to always try our best and never be satisfied with just sliding by,” he recalls.

Leadership programs — like Educating Leaders in Today’s Environment (ELITE), Orientation Team, Diplomats and Student Government — also honed Quiñones’ passion for working hard and grasping every opportunity to better his skillset and himself.

But his memories of his Spartan life aren’t just about hard work. Living on campus for all four years, he enjoyed getting to know a wide variety of students, whether playing intramural sports, celebrating birthdays or watching the Bucs win the Super Bowl.

“We often reminisce about the fun times we all had during those days,” he says of the lifelong friends he made. He’s also married to a fellow Spartan, Jess (Venero) (’11), with whom he has a daughter, Isa.

Although Quiñones was singled out for this honor, which applauds alumni who have outstanding career achievements and engagement with the University, he viewed it as an opportunity to thank so many of the people who make UT special.

“I want everyone to understand my gratitude for the professors, advisors and leaders,” he says, “for the role they play in all UT students’ development and preparation, not just mine.” 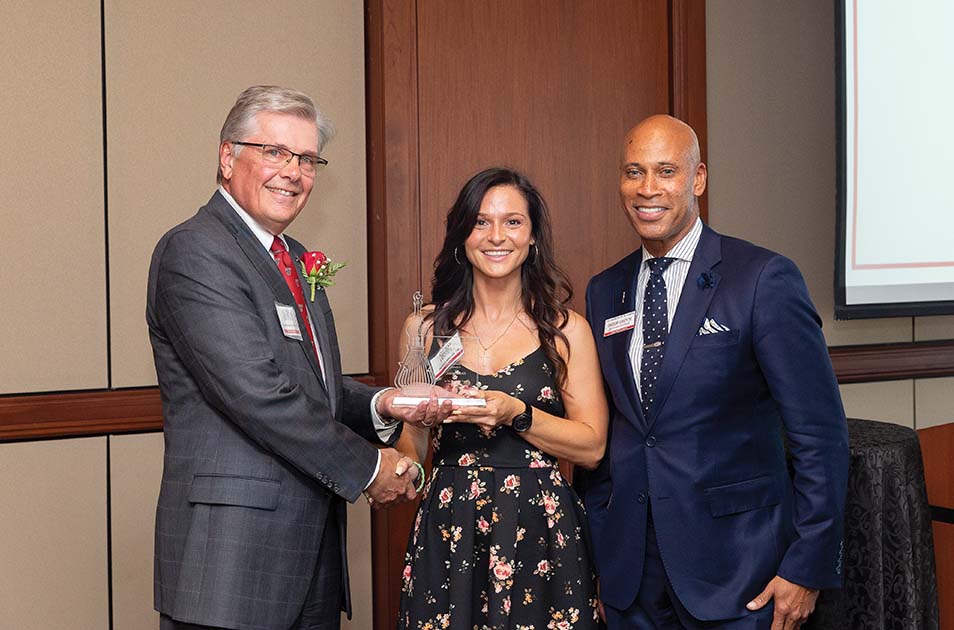 Tom Meachum ’81, MBA ’93, Jessica Merrick ’10 and Greg Canty ’92, chair of the Alumni Association Board (left to right), celebrate Merrick, who was given the Young Alumnus Award. Photo by Jessica Leigh

The recipient of the Young Alumnus Award, Jessica Merrick ’10, knows her way around sports and law. Now the senior counsel for The IRONMAN Group, known for its grueling triathlon events, she offers insightful guidance on global partnerships, technology and software agreements and product licenses.

Recognized by Tampa Bay Business Journal as a “Top Corporate Counsel” and an “Up and Comer,” Merrick previously honed her skills as the associate counsel at Vinik Sports Group and while working for Minor League Baseball.

Athletics were, in fact, a big reason she came to UT. Yes, she played a variety of sports, but more importantly, she was a fan. Hailing from Rochester, NY, she chatted with a recruiter at her high school who told her about UT’s beautiful campus, splendid weather … and proximity to the New York Yankees’ spring training facility. Intrigued, she also learned more about the array of available scholarships, which Merrick says were crucial to her securing her education.

Merrick was sold on The University of Tampa’s merits and soon joined Spartan life. She describes her professors as nothing short of fabulous. They set her up for success, learning and analyzing the law, so she was superbly well prepared by the time she pursued her law degree at Southwestern University Law School in Los Angeles.

UT’s splendid setting was all the recruiter had said it would be. Interestingly, it made her learn to get her priorities straight. “I’d work really hard, then reward myself by hanging out with friends outdoors,” says Merrick. Among her favorite off-hours pursuits: playing flag football and going to UT baseball games as the sun set over downtown Tampa.

She has just one regret about her time at UT. Thanks to the college-level credits she earned in high school, she had automatic sophomore standing when she enrolled. Merrick wishes she could have had four full years on campus, versus just three.

Receiving the award, which goes to alumni under the age of 35 who have significant career or civic achievement, was a peak experience, and it gave her the opportunity to finally fulfill one long-held Spartan dream.

“I met President Vaughn in person! I hadn’t done so before and was so honored,” she says. It capped off what she calls a “truly heartwarming visit” to the school that so successfully launched her adult life. 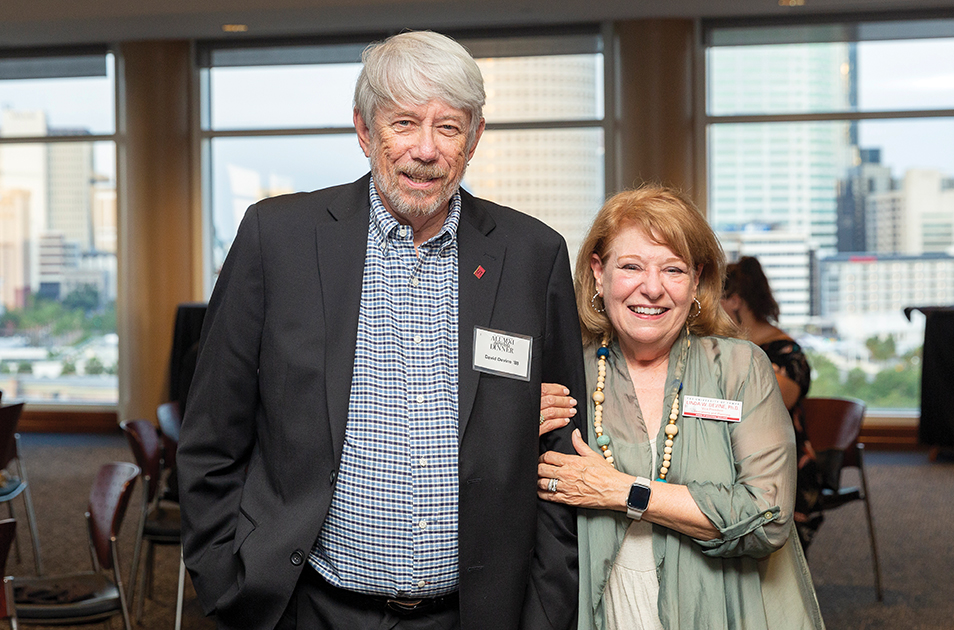 David ’78, ’01, MBA ’83 and Linda Devine, who was honored for her service after retiring this year as vice president of operations and planning (left to right). Photo by Jessica Leigh

Rounding out the festivities that evening were three more awards. Monica Cook ’05, M.Ed. ’12 became the inaugural recipient of the newly minted Alumni Leadership Award. As a past trustee and a former chair of the Alumni Association Board, Cook significantly amped up volunteer engagement on campus while boosting the school’s fundraising.

Also honored was Linda Devine, who retired this year from her role as vice president of operations and planning. Devine had joined UT in 1981 and held an array of roles over more than 40 years of dedicated service. 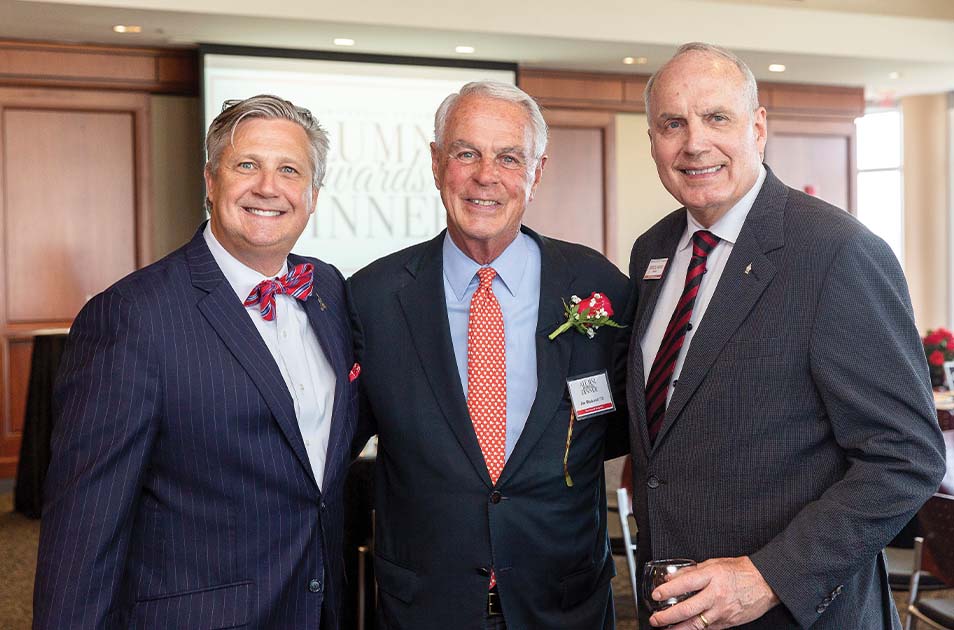 The gathering also saluted Jim MacLeod ’70, immediate past chair of the Board of Trustees (one of only two alumni to ever hold the seat), for his leadership in shepherding UT forward and raising resources to enhance its future. Cheers to an evening that recognized some stellar members of the Spartan community!