Eric Ballard is interested in discovering new methods for the preparation of organic compounds. In particular, he is interested in new reactions applying green chemistry concepts. (Green chemistry aims to perform chemical reactions more efficiently with safer reagents to generate less waste.) New synthetic methods, especially those consistent with the ideas of green chemistry, are always needed for the total synthesis of biologically and chemically interesting molecules and for useful preparations of new materials or pharmaceuticals.

The natural products shown below have been prepared by total synthesis in the laboratory. Paclitaxel (Taxol ®) became one of the best-selling drugs. It is a mitotic inhibitor used for the treatment of several cancers, including breast and ovarian tumors. Paclitaxel was originally isolated from the Pacific yew tree. Saxitoxin is one of the most potent neurotoxins; it causes paralytic shellfish poisoning caused by red tides. These two compounds hint at the diversity of powerful biological activities and beautiful architectures associated with naturally occurring substances. To prepare complex molecules, new synthetic methods are always needed. 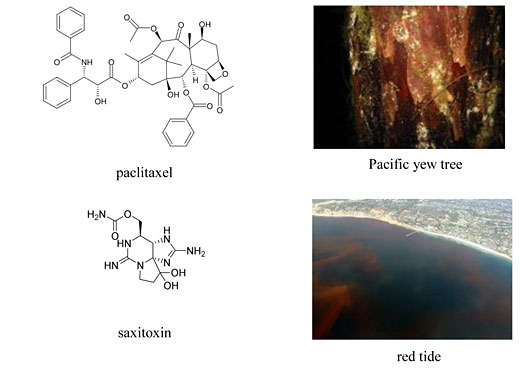 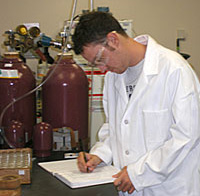 A UT student in Eric Ballard's lab records data from an experiment.

Learning by conducting research is complementary to learning in lecture and laboratory courses. In courses, students learn about science; in the research lab, students perform science. In Ballard's lab, student co-workers are given a research project to develop. They learn how to apply the scientific method to a research project by reading the literature to generate hypotheses and design experiments. Student researchers learn additional techniques about conducting experiments and interpreting empirical data. Ballard encourages students to email eballard@ut.edu if they are curious about his research or interested in working in his lab.

Development of an enantioselective acylation catalyst for secondary alcohols