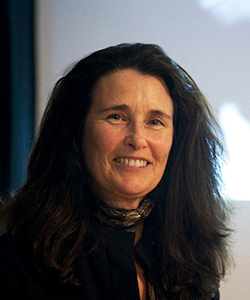 Professor Dana Plays is an internationally recognized filmmaker and digital media artist. She has taught all aspects of film and digital production since 1990, with previous teaching appointments at Syracuse University and Occidental College.

Plays has exhibited her work at the Whitney Museum of American Art and more than 50 international film festivals, including Edinburgh, Montreal Nouveau, and Seattle International Film Festivals. Her films have garnered more than 16 film festival awards including the prestigious First Prize Jurors' Choice Award at the Black Maria Film and Video Festival for Nuclear Family; Tom Berman Award for Most Promising Filmmaker at the Ann Arbor Film Festival for Zero Hour; Best Experimental Film at the Houston International Festival for Across the Border; and Best Documentary Award at the New Orleans Film Festival for Love Stories My Grandmother Tells, which also was broadcast on VPRO, a Dutch national television network.

Since arriving at The University of Tampa in August 2005, Plays has had national awards and exhibitions including a Black Maria Film Festival award; a solo retrospective in Boulder, CO, at First Person Cinema, the longest standing American showcase for independent film; a digital installation of her piece Salvage Paradigm, at the Play Space Gallery, in San Francisco; a digital installations of and her video montage of Hollywood films situated in the Los Angeles River, River Madness, at the Skirball Center in Los Angeles. Plays served on the board of directors of Film Forum, in Los Angeles, Canyon Cinema, in San Francisco, and the board of trustees of the Putney School, in Putney, VT. She has ongoing membership with the College Art Association, Society of Film and Media Studies and University Film and Video Association.