Energy Use and Audits 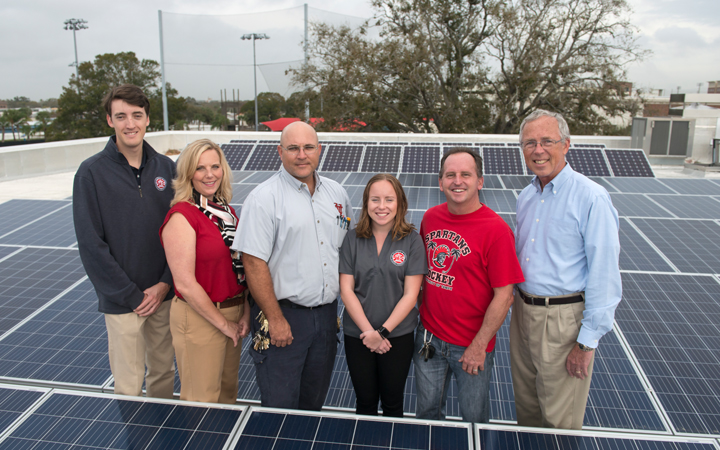 Energy use is the single largest environmental impact of a university campus and offers the biggest potential payback. Hence, we concentrate our sustainability efforts in this area. Over the past two decades, The University of Tampa periodically self-performs or procures third party audits to augment potential energy and water savings.

The following measures have been implemented throughout the years based on successful energy and water conservation measures:

(February 2018 update) Photovoltaic (PV) solar panels have been installed at the Thompson Building to provide power to offset utility power.  Systems that have been installed in previous have now collect an estimated 3 million gallons per year of condensate from air handling units, which is distributed to Chilled Water Plant cooling towers as a supplemental source for make-up water.

(September 2014 update) The University of Tampa has installed one electric vehicle (EV) charging stations located on the first floor of the Thomas Parking Garage. This EV charging station can charge all new generation electric vehicles, such as the Chevy Volt, Nissan Leaf, Ford Focus Electric and Honda Fit Electric. More stations will be added as need demands.

(September 2013 update) Single speed motors for existing air conditioning systems have been replaced with variable speed motors that can accelerate slowly and provide only the amount of power required. The result is a reduced consumption of electricity to drive the motor and an extended service life for the equipment.

The central campus and east campus chilled water networks were joined during the summer of 2013, providing a back-up for each system. A second chiller unit (the second phase) was established in early 2013 and provides cooling to the Jenkins residence hall and to replace aging equipment in Brevard Hall and the future distribution to Austin Hall to replace that aging equipment.

Solar energy is being captured by roof top panels to provide the primary heat source for the hot water in two of our recent projects, the ROTC/Athletics addition to the Martinez Center and the Jenkins residence hall that was opened in August 2013.

(July 2012 Update) All equipment in the Vaughn Center and Stadium Center dining areas has been replaced with carefully engineered and efficient Energy Star rated products. Solar energy has been utilized as a new energy source in several areas on campus including at the Martinez Athletics Center with the installation of solar panels to provide hot water for showers. All emergency phones around campus also are solar powered.

A central chiller plant and a significant distribution network of piping were constructed to serve the west and south campus facilities. The plant will be expanded in 5 phases with the initial phase brought on-line during the late summer of 2012. This unit will provide cooling for the expanded Bob Martinez complex and the Sykes College of Business building plus the Vaughn Center. Through the design of the piping network and valves, buildings can be added or cut off from the chilled source to allow for expansion.

(July 2011 Update) Lighting in the West garage was replaced with induction lighting, a model with a more traditional look for exterior and garage lighting that reduces electric consumption dramatically. A significant reduction in electric consumption has been realized, with savings comparable to the dramatic results seen in the Thomas garage project.

(September 2009 Update) In an effort to reduce electricity consumption on campus and be more mindful of resources, lighting and air conditioning projects were completed during the summer of 2009.

More than 500 occupancy sensors were installed in seven campus buildings to turn off of lights in unoccupied spaces. Lighting in renovated classrooms and lab spaces was updated with efficient T-8 fluorescent fixtures and lamps, and the lighting of the Thomas Garage was replaced with LED fixtures. The LED lights will reduce the quantity of fixtures needed and reduce the heat generated by the lamps with a comparable level of lighting. The savings in power consumption is so significant that an engineering study confirmed that the production of chilled water for the Sykes Chapel and Center for Faith and Values can be accommodated from the existing transformer for the Thomas Garage.

Air conditioning for the Martinez Sports Center arena was replaced with a chilled-water based system that will be significantly more efficient in the use of electricity to handle the cooling and air exchange for the facility. The arena space was constructed in 1984, and the original air conditioning system was due for replacement. The old system was located on the roof and hung from the inside ceiling, putting a strain on the structure and contributing to a noisy environment. The replacement system sites the chiller unit on the top of the West Garage and the twin air handler units are now located outside of the building at the northeast and northwest corners. Condensation from the system is being utilized for the irrigation of 15,000 square feet of landscaping on the west side of the campus.

A chilled-water based system has also been installed to cool the Registrar's Suite in Plant Hall and student rooms in the west wing of McKay Hall. Inefficient individual electric air conditioning units were removed and replaced with ceiling mounted fan coil units that produce a more even and quiet cooling and heating system. The same conversion of the air conditioning system was made in Smiley Hall during the summer of 2010. The Smiley conversion was a part of a significant renewal project that included new windows and insulation of the resident’s rooms.

Single-speed motors for existing chilled-water based air conditioning systems have been replaced with variable speed motors that can accelerate slowly and provide only the amount of power required. The result is a reduced consumption of electricity to drive the motor and an extended service life for the equipment.

(June 2009 Update) Technology is a high priority at the University of Tampa. Lowering the demand of energy for the thousands of computers and peripherals is also a high priority. The Office of Information Technology and Security regularly looks at ways to reduce energy consumption and at purchasing equipment that is sustainable.

The desktop and laptop computers – both Mac and PC – used at UT include the latest low wattage processors as well as efficiently designed cooling systems and power supplies. All computer power supplies are 85 percent efficient.

Power saving settings on Windows PCs are set to balance between power savings and convenience. Initial settings activate the screen saver mode after 15 minutes of inactivity. While this setting is maintained in computer labs, the setting may be adjusted at individual workstations.

Lastly, the 311 computers in UT’s 12 computer labs will be automatically turned off during hours when the labs are closed. This will conserve an estimated 19,950 hours of power consumption per week.