The cutting-edge, virtual production technology donation includes a 30-by-14-foot Vū LED screen and 4K LED processor. In addition, Vū, which is North America’s fastest-growing network of virtual production studios for the film, video and advertising industries, is donating more than 120 hours of stage time and training at their flagship Tampa studio for UT students to get hands-on experience with the technology on a larger scale.

This video of the installation of the Vū volume in UT’s virtual production studio was made by Jean-Baptiste Hansali ’22, a film and media arts major. The footage shows the installation as well as collaboration work in Warren Cockerham's FMX 324 Cinematography course and Gregg Perkins' FMX 410 Virtual Production course.

The donation will be used primarily by UT’s Department of Film, Animation and New Media (FMX) and the new Master of Arts in Social and Emerging Media graduate program, but will have campus-wide applications. Unlike conventional filmmaking, virtual production allows filmmakers to shoot photo-realistic virtual environments in the studio instead of having to travel on location, saving both cost and time. Virtual production is not only a game-changer in the film and video industry but will also impact many adjacent industries such as gaming, military and medical simulation.

David Gudelunas, UT’s dean of the College of Arts and Letters, described the partnership between UT and Vū as “truly synergistic.”

“We are both committed to making Tampa a place where technology and art contribute to the economic and cultural vitality of the city,” he said. “The new LED volume on UT’s campus will provide an unparalleled opportunity for students in the College of Arts and Letters to collaborate across disciplinary lines, get the most cutting-edge hands-on experience and produce projects that will break barriers.” 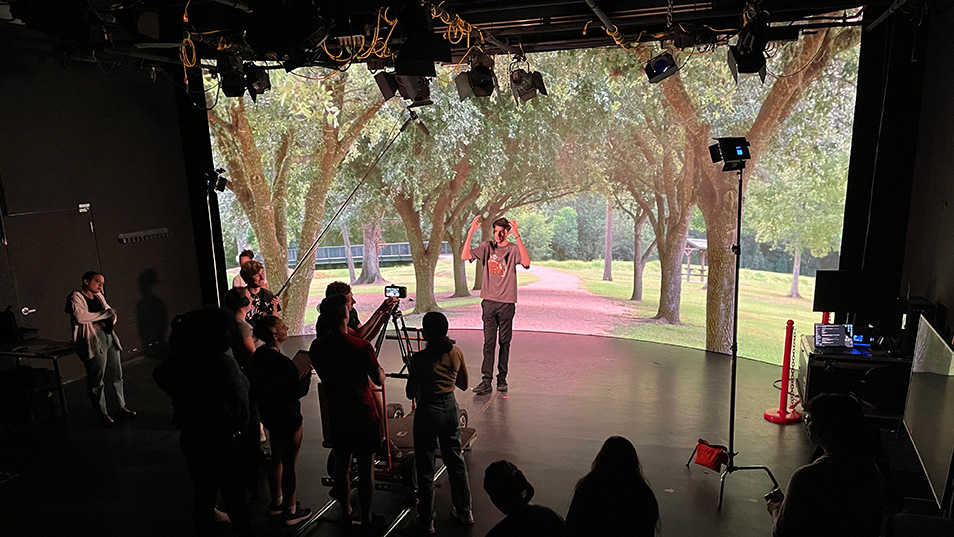 Unlike conventional filmmaking, virtual production allows filmmakers to shoot photo-realistic virtual environments in the studio instead of having to travel on location, saving both cost and time.

A “Vū @ UT” unveiling and open house will be held on Thursday, April 14, from noon-1:30 p.m. in the Virtual Production Studio (formerly the black box theater) in the Cass Communication Building on campus.

“Vū stands at the forefront of the future of filmmaking, and like any emerging technology, our number one challenge is building out the workforce and ensuring we find individuals to fill these highly-skilled and high-paying positions,” said Tim Moore, CEO of Vū. “We are thrilled to partner with The University of Tampa as we develop a talent pipeline of graduates who will become leaders in the next generation of filmmaking.”

As part of its workforce development program, Vū has created a learning management system that will be used to track, train and empower students resulting in certification in virtual production.

In UT’s Department of Film, Animation and New Media students learn by doing and thinking with courses in studio production and using state-of-the-art facilities, computer labs, digital cameras and production suites. Students can earn a BFA or B.A. in Film and Media Arts, BFA in Animation, BFA in New Media or a minor. All programs are accredited by the National Association of Schools of Art and Design (NASAD).

The Master's in Social and Emerging Media is a newly-launched graduate program that blends technology and creativity as it prepares students to develop compelling media projects, build sophisticated social media strategies and engage effectively with audiences.