It just might be the most comprehensive, far-reaching learning experience UT students have during their time on campus. Yet, most students probably don’t even know they’re learning anything.

When classes end for the day, students are quick to head to their residence hall rooms to relax, study or socialize. Mid-day naps and caffeine-fueled cram sessions, as well as generational variations of impromptu dance parties, hanging out and binge TV watching will always be a part of on campus living.

Yet today, more than ever, at UT’s residential curriculum, Spartan Living, includes Spartan Ready competencies self-awareness, interpersonal abilities, life skills, teamwork and global engagement, which are at the foundation of every students’ residence life activities … whether they know it or not.

Over the past 20 years, UT has built eight completely new residence halls, many of which were likened to “palaces” by the Princeton Review.

But behind the sleek interior design, amazing views and modern amenities are hours of research and thought during the design stage that focused on how to best serve students who will be assigned to those halls.

Buildings that house primarily first-year students, such as Austin Hall, McKay Hall and Vaughn Center, do not have kitchens within suites. Why? According to Jennifer Scaia, associate dean of student conduct, orientation, and residence life, those students need to be out of their rooms, in the dining halls, interacting with other students, faculty and staff.

Those same buildings will have more shared common spaces than the buildings that house upperclassmen, for the same reason.

On the other hand, Palm Apartments, UT’s newest residence hall that replaced the beloved but outdated ResCom, features suites that consist of four single bedrooms with a living area, bathroom and kitchen. Urso Hall has a large number of single rooms with private bathrooms. Both halls are designed for upperclassmen.

“First year students need to be mixing and mingling with other students,” Scaia said. “It’s an intentional strategy modeled for students to hone skills such as interpersonal abilities, self-awareness and appreciating differing viewpoints.”

Plus, living on campus assists with the transition from high school and a family living environment to more independent living and study at UT. “This may be their first time away from home, so it is helpful to have someone with them in their living space,” noted Sabrina Griffith, director of residential communities.

Since the 1960s, research has shown that positive residential life programming can enhance the learning process. As such, residential communities can become an integral part of the university’s educational objectives.

According to Scaia, the past 10–15 years especially has seen this philosophy take hold in higher education, and one that UT has been “definitely on the more intentional side,” Scaia said.

Gone are the old days when students were placed in whatever room was available on campus, they rarely saw their resident assistant, and hall meetings and programming were non-existent.

“Everything that happens in the halls should develop life skills and interpersonal abilities, and should be thriving places that offer co-curricular and leadership opportunities.”

“Students do more than just live here,” said Griffith. “We believe that learning happens outside the classroom. Spartan Living helps give that learning focus and structure.”

For this first year, for instance, one of the areas Residence Life staff chose to focus on was alcohol education. Previously, the process of alcohol education was inconsistent, with resident assistants (RAs) creating programming using their own resources.

This year, under the Spartan Living curriculum, RAs were trained by UT Health and Wellness Center staff and provided specific information to use in programming. RAs have then used this training and information throughout multiple touchpoints with their residents, from educational programs during building-wide Take Back Thursdays or floor meetings, to creating educational bulletin boards on their residence hall floor.

Next year’s focus may be stress management, which is a big concern amongst college students today.

Learning Where You Live

Students looking for more integration between their academic and residence life can choose to live in one of UT’s learning communities.

Learning communities allow students to reside with those who have similar interests. Almost all residents of McKay Hall, for instance, are enrolled in the University’s Honors Program.

“Instead of a place where students just live, our goal is to make McKay more of a cohesive environment that gives students space to form networks and make friends,” said Kacy Tillman, associate professor of English and associate director of the Honors Program.

The school year kicked off with a barbecue on move-in day. In the past, they’ve had a dozen students show up to the kick off, but with the addition of the learning community this year, almost all 440 new honors students showed up.

Other programs, which have seen similar success, include Coffee Conversations, where a small group of residents meet with a professor to discuss topics that are in the headlines, and movie nights on the Tuesday before each Honors Symposium, where the film correlates to the topic up for discussion.

“My hope for the learning community is for students to have the same kind of experience I did, where they take the conversation back to their rooms and debate on a topic well into the night,” said Tillman.

For Mallory Kuba, who is currently seeking her MBA degree as part of the MBA 4+1 program, coming to UT as a new student and being housed in the Honors floor in the Vaughn Center made all the difference.

“I came to UT not knowing a soul,” Kuba, of Annapolis, MD, said. “But living on the Honors floor was a great opportunity to be around students who were motivated and engaging.”

Taking It Off Campus

Today, Kuba lives off-campus in the same apartment she moved to for junior year. But her transition to off-campus living was a rocky one. Hers was the first class impacted when UT made a significant shift to the student housing assignment philosophy in Fall 2016, giving on-campus housing priority to first-year students.

For Kuba, who was used to being minutes away from any class or event, being off-campus meant having to fine tune time management and scheduling, something that has come in handy as a graduate student.

As students develop and choose to live off campus as juniors and seniors, UT now offers resources to help make that transition. It’s yet another learning outcome. UT’s off-campus housing coordinator assists students in their housing search and hosts two off-campus housing fairs each year. The resource is also valuable to seniors who will inevitably be searching for housing after graduation.

Mauricio Calderon, a junior from Tallahassee, lived on campus for two years prior to moving to an apartment this year. A member of the swim team, Calderon’s transition from life at home to living in Austin Hall as a freshman was seamless, partly due to his roommates all being on the swim team, and his own independent nature.

“We had five swimmers in our suite so it was an easy transition. We were all clumped together so it was really good for bonding,” he said.

Now, living off campus, his biggest challenge has not been the commute or scheduling, but grocery shopping and cooking, after two years of on-campus dining convenience. Nonetheless, he couldn’t imagine living off-campus without the two years of living on-campus, where he learned time management. “It’s like playing grown up, but it’s not a game,” he said. “I feel like college is a constant transition to the real world. And UT has helped soften the blow.”

UT’s endeavor into the residential curriculum is still in relative infancy, so administrators are eager to assess feedback and outcomes via surveys and focus groups, especially in terms of Spartan Living programming.

“We’ve had good feedback from student staff who are delivering the programs, and we’ve had good attendance at residence hall programming,” Scaia said. “At the end of the day, I would know we had succeeded if/when any residential student could tell you ‘This is what I learned as a result of living on campus, and those skills are connected to Spartan Ready, which prepares me for life beyond UT.’”

This feature appeared in the Winter 2018 UT Journal. 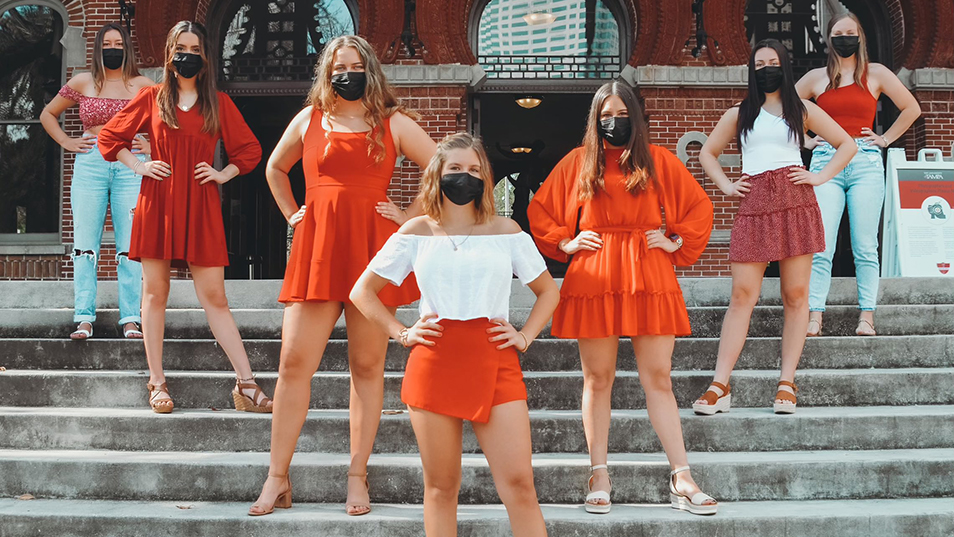 UT’s association was recognized in the categories of community impact, judicial procedure, recruitment and marketing. 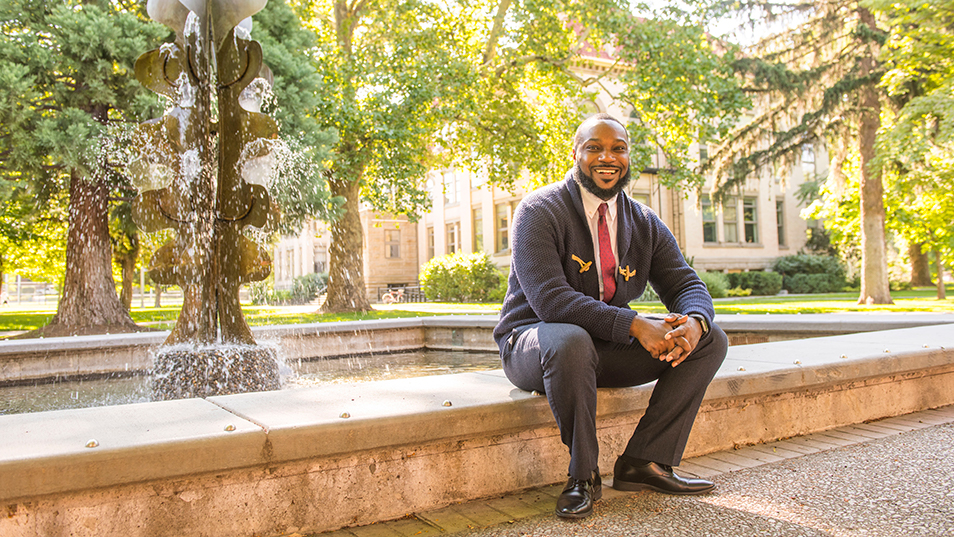 The position is charged with developing a diversity strategic plan to achieve diversity, equity and inclusion goals and objectives that support UT’s mission. 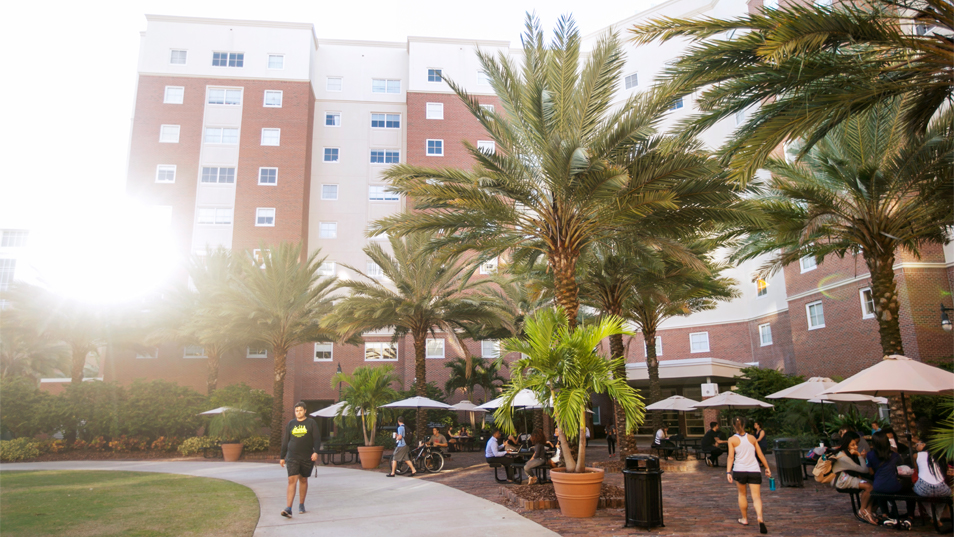 The University of Tampa was recognized for academic initiatives and personal interactions.