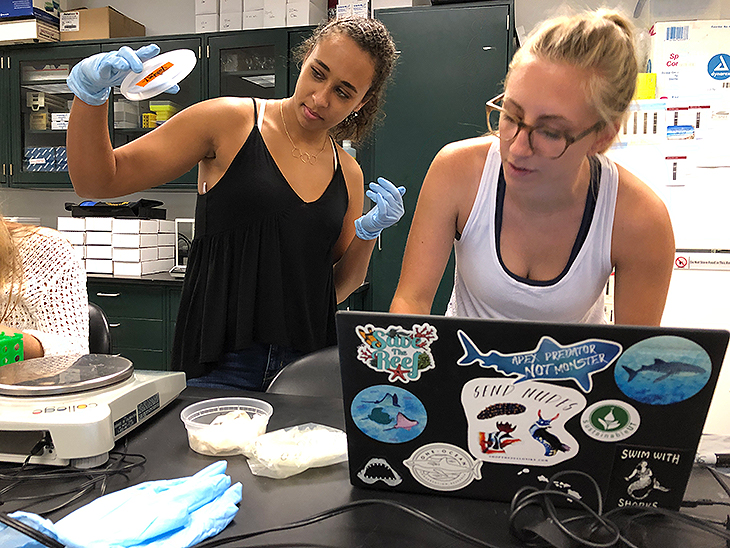 Kyra Okin ’21 (left) and Sarah Detmering ’19, who have worked with Taegan McMahon on a couple projects involving the chytrid fungus, said McMahon’s mentorship has made a big impact on their UT experience.

“It’s really unusual to have that size of a grant to begin with. Most grants are much smaller, and to have all of the research driven by undergraduate researchers is definitely a one-of-a-kind scenario,” said McMahon, who has a cohort of UT students assisting with the research.

For years, McMahon has been working to defeat a fungus — a chytrid fungus or Bd, which is short for Batrachochytrium dendrobatidis — which is contributing to the extinction of frogs globally. She’s helped discover that frogs can be immunized against the fungus and is currently working on developing a vaccine for it. With this new grant, she’s now also studying what other animals might be carriers of the fungus.

“In my Ph.D. [in 2013] we figured out the fungus will infect crayfish and things along those lines. We’re almost ready to publish a paper on nematodes, looking at flying vectors, other freshwater invertebrates, all of the things out there that could possibly be a host for the fungus,” McMahon said. “We’re asking lots and lots of questions, which is awesome. I’m pretty excited about it.” 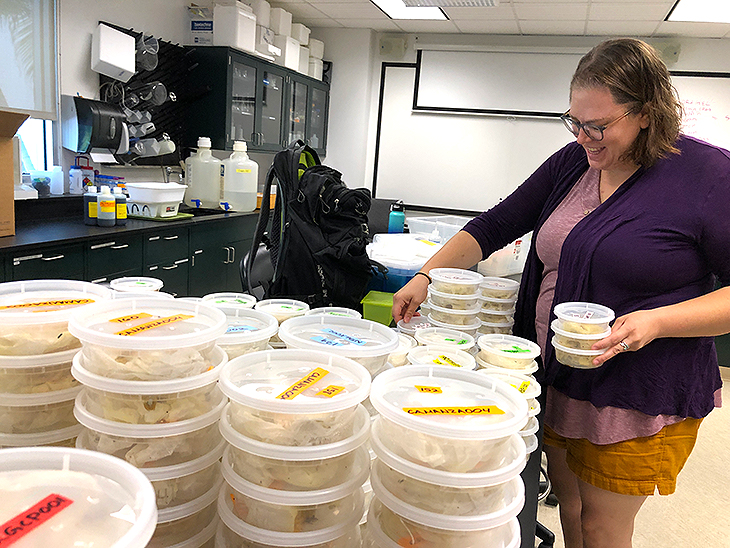 For this new grant, McMahon is focusing on non-amphibian hosts of the fungus, such as dragonflies, mosquito larvae and nematodes. She is asking bigger-picture questions with this research that could change how we approach the conservation of amphibians and how we approach the whole disease across the spectrum.

“Part of the hope is that we can actually take some of the non-amphibian systems and look at bigger-picture disease dynamics in those systems, so that we can shift away from using amphibians in the lab,” said McMahon. Amphibians have brains and are more sensitive — plus, they are declining much more rapidly than other groups.

“If we can ask those questions not with the most sensitive, declining group, then that is the way we should go.” 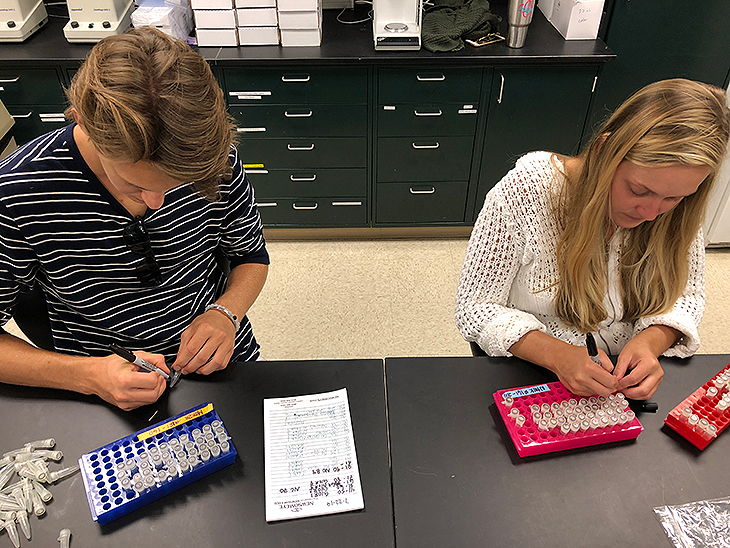 The two other institutions involved in the grant will be providing fieldwork and modeling of disease dynamics. At UT, McMahon will be guiding her research students through a myriad of experiments with non-amphibian hosts.

Sarah Detmering ’19, a marine science-biology major who had McMahon as one of her first professors at UT.

“She's taken the time to get to know me individually and understand where I would work best in her lab,” Detmering said. “I’ve become a lot more confident in school, research and life because of her investment in me.”

Since receiving her first invitation, Detmering has been working diligently on projects with McMahon, building on research from previous semesters and even seeing some implemented in the field.

“Until she invited me to try it out, I never thought that I was interested in research,” said Detmering, of St. Louis, MO. “It only took a few days for me to realize I loved working in the lab.”

Kyra Okin ’21, a biology and psychology double major, wants to be a veterinarian. She discovered McMahon in a previous class where she read one of McMahon’s research papers involving the transfer of Bd by means of other organisms.

“I am a very hands-on learner,” said Okin, who is fascinated with animals, parasites and diseases. “Assisting with the lab has allowed me to gain an excellent understanding of Bd, dissections, frogs and research, among other things.” 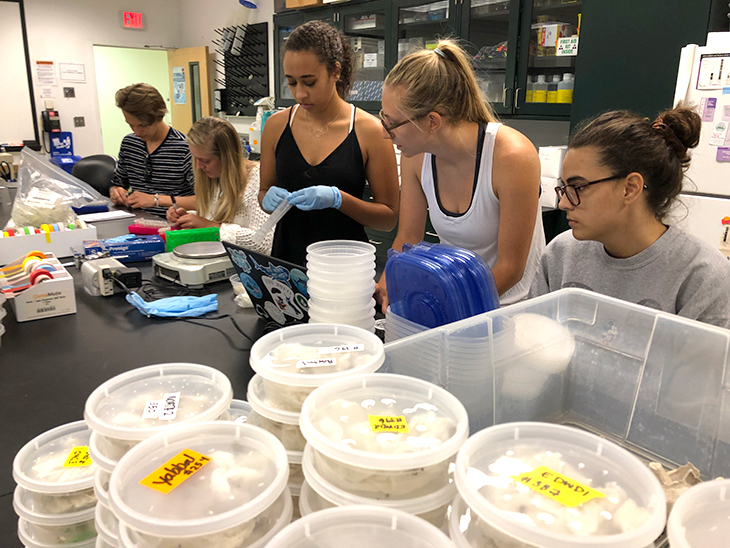 “I am a very hands-on learner,” said Okin, center, who is fascinated with animals, parasites and diseases. “Assisting with the lab has allowed me to gain an excellent understanding of Bd, dissections, frogs and research, among other things.”

A National Science Foundation grant McMahon received last year focuses on developing a vaccine for the chytrid fungus and involves recent graduate Caitlin Nordheim ’19, who is the lab manager for the project. This summer, Alexis Garcia ’20 earned a Summer Undergraduate Research Fellowship from UT’s Office of Undergraduate Research and Inquiry and worked with McMahon to study “Acquired Resistance: what is the most effective amphibian vaccine for chytrid?”

“In class, you’re always studying and competing against fellow students to do well in the class, but this was an entirely different way of learning,” he said. “Seeing students from all levels of their professional careers come together as a team in a non-competitive way for one purpose has been very enjoyable.”

Zloty, a psychology major with a minor in biology, wants to be a family physician, and this early lab experience gave him a better appreciation for what he was learning in the classroom.

“Being a student, you so often feel that the material you’re learning is solely for a test and a final grade, but it goes far deeper than this,” said Zloty, of Land O Lakes, FL. “Seeing the material learned come to life was eye opening. Conserving species and maintaining diversity is such an important area of research, especially today, and I am so thankful to be a part of it.”