Physics Professor Looks to the Stars in Dwarf Galaxy Research

Standing on the roof of the West Parking Garage, a group of students and faculty gathered in the middle of the night above the lights of campus to stare up at the heavens.

To one of the students peering through the eight-inch reflecting telescope, Denija Crnojevic, assistant professor of physics, pointed to the left at the planet Mars. Crnojevic beamed while explaining the visible ice caps millions of miles away. 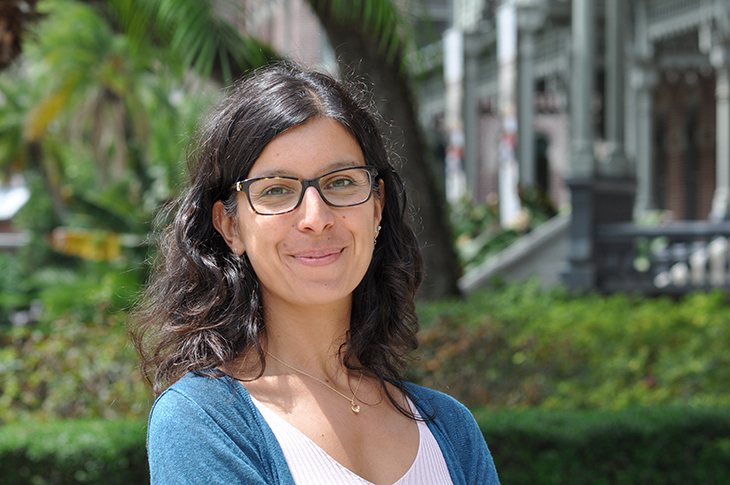 Denija Crnojevic, assistant professor of physics, received a three-year grant from the National Science Foundation for her research on “Testing the Lambda Cold Dark Matter Paradigm with Dwarf Satellites of Low-mass Galaxies.”

“When I was very young, I remember being in love with the night sky and stars,” Crnojevic said. “I wanted to be an astronaut of course, but then that became tricky, and I decided to study the galaxies.”

In the summer of 2018, UT's College of Natural and Health Sciences announced select faculty members who received three-year grants from the National Science Foundation for research. Crnojevic was funded for her research on “Testing the Lambda Cold Dark Matter Paradigm with Dwarf Satellites of Low-mass Galaxies.”

“In astronomy, we know that we live in a very big galaxy,” said Crnojevic. “We also know that surrounding our galaxies, there are smaller galaxies called satellites. These are just tiny versions of ours, which are called dwarfs. This is what I study.”

Recently, Crnojevic has discovered these small galaxies could also have other satellites of their own, so even smaller dwarf galaxies. Her observations and research are now debunking her past theories.

“So, this is my goal: to find all the small galaxies,” Crnojevic said. “I want to find these little galaxies, then compare them to our current understanding. By doing this, we hope to get a better understanding of galaxy formation overall.”

Crnojevic uses advanced and powerful telescopes in Chile and Hawaii, as well as other locations around the world, collaborating with other professors and professional colleagues.

So far, she has found that galaxies living in different environments (i.e., whether they live in populated groups of galaxies or in isolation) show very different characteristics. This means that whichever environment a galaxy lives in, it will influence how it evolves. Crnojevic said she and her collogues are trying to find out why this happens.

“As soon as I discover something new, there are always more questions that develop from that discovery,” she said. “Galaxy research is endless.”

Crnojevic attends conferences every year where there are other collaborators who work on similar research. She will be attending three conferences this summer and early fall in Italy, Russia and Spain.

Not only is Crnojevic involved within the academic environment, but she said it’s important she works beyond the University and within the community. She has plans to present at public events in the Tampa Bay area and hopes to create events for women in science, as she wants to encourage young women to pursue professions similar to hers.

“I enjoy the challenge where I’m in front of something that no one has seen before and trying to answer questions that no one has answered before,” said Crnojevic. “It can be frustrating for that reason, but it’s really exciting when you do get answers.”