A typical day in the lab for Wyatt Larrinaga ’21 involves wearing a white lab coat and protective goggles, doing lots of mixing and stirring, and utilizing pipettes and round-bottom flasks. 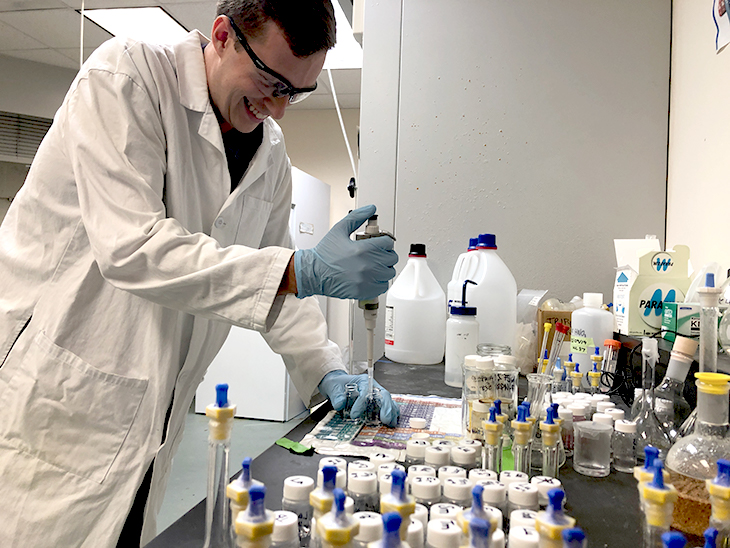 “I definitely think this research experience has pushed me to be more of a progressive student,” said Wyatt Larrinaga ’21.

Some days he even watches liquid drip, which Larrinaga said is a running joke in the lab.

But it’s true. He spends hours collecting liquid that drips into test tubes and uses different analytical techniques to determine the composition of the liquid, including running samples through a Nuclear Magnetic Resonance (NMR) instrument, which exposes the sample to a magnetic field, allowing him to identify the types of molecules that he is trying to synthesize.

Larrinaga has been working with Eric Werner, associate professor of chemistry and chair of the Department of Chemistry, Biochemistry and Physics, since Fall 2018. Werner is an inorganic chemist who works with lanthanides, which are a group of metallic chemical elements that are part of a larger group of metals known as the rare earth elements. Werner’s research has focused on the different applications and properties of the lanthanides, such as luminescence.

“A number of lanthanides will display bright red or green. They’ll glow under certain conditions, which makes them useful for cellphone screens and other optical devices and biomedical sensors,” Werner said. “It turns out that lanthanides are important in many areas of modern technology – phones, car batteries and in alternative energy applications.”

Mining lanthanides from raw sources is challenging, and they are difficult to recycle out of manufactured products. For the last five years, Werner has focused his research on developing better ways to accomplish both.

“There is still no great method for highly efficient, selective lanthanide extraction,” Werner said. “People have been trying for many years, but it’s still an unsolved problem. So I became interested. There are all these unique applications, but you need the metal first to do the application.”

Werner and his students design and synthesize the extractant molecules (called ligands) and test them for selective metal extraction using a variety of instrumentation within the department. There is also an important collaborative dimension to the project, with the research team working with an organic chemist, Shannon Biros of Grand Valley State University, and her students as the groups explore new ligand designs and syntheses. This productive partnership across institutions exposes students to the collaborative nature of research, even beyond UT, and has led to some exciting results.

Larrinaga wanted to get involved with research from the beginning of his UT career, but the opportunity hadn’t arisen organically. His student lab mentor, Nichole Laggan ’18, had told him all about the research she was doing on a deadly frog fungus, which made him all the more jealous. Laggan, who was practically living in the Cass science building between being a lab mentor, doing research and attending class, knew Werner from seeing him around the building. She knew all of Werner’s research students were graduating, “so he was empty nesting,” Larrinaga recalled. So Laggan reached out. 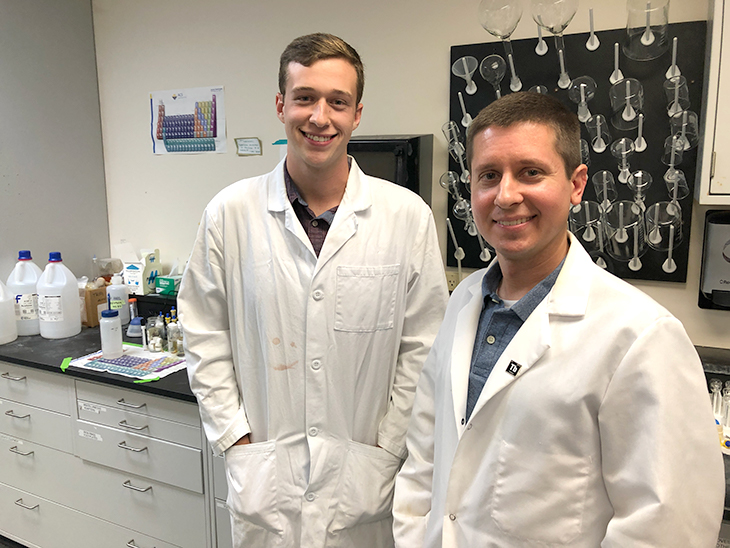 Larrinaga, left, has been working with Eric Werner, associate professor of chemistry and chair of the Department of Chemistry, Biochemistry and Physics, since Fall 2018.

“One student was writing a rec letter for another, pretty much,” Werner said, still with a bit of surprise in his voice. “I’d never had that happen before. I’d never had a student recommending a student. I thought that was different.”

It was a good fit. In Larrinaga’s sophomore year, he began working in Werner’s lab.

“I’ve always enjoyed school very much. Coming into college I had the idea of wanting to go to grad school and be a professor,” said Larrinaga, a chemistry major with minor in biology. “But I was getting to the point where I wanted to learn more than the basic things in class.”

Larrinaga has received independent study credit for each semester in Werner’s lab, and this semester it will count toward his required capstone course for the American Chemical Society (ACS)-certified tract of his bachelor’s in chemistry.

“Looking back at myself freshman year, just reflecting on who I was, I was just like typical student. I’d go to class but didn't really get much from it. Like I would go take a test, do the homework, you know, but ever since I started doing research I feel like I’ve become a better student,” Larrinaga said. “I try and understand the material being presented in my classes on a more thorough level. I don't see myself as just taking information at face value. I want to know more of the why behind it,” he said. “I just don't accept a theory. I want to understand the theory more so. I definitely think this research experience has pushed me to be more of a progressive student.”

“We are teaching them through our research. We are teaching them how to think scientifically and how to apply the things they've heard all about in their classes but now actually are doing,” Werner said. “(Students) can take it only so far in a traditional lecture or lab course. To bring the experience full circle they must apply this foundation and design projects, fail at projects, and learn from those mistakes or surprises as they determine what to or what not to pursue. There’s no substitute for that.”

He said many of his students, like Larrinaga, want to go on to graduate school. Working in his lab is a good test drive for that plan, where independence is encouraged.

“They’ll know pretty quickly if this is something they are comfortable with. They get a preview of their lives to come,” Werner said. “Even if they don’t go to grad school, whatever they do they’ll have to think and problem solve and come up with their own ideas and communicate those ideas, which they get a lot of opportunities to do through this as well.”