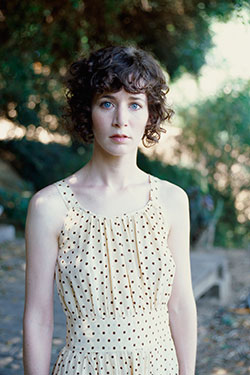 Miranda July is a filmmaker, artist and writer. Her videos, performances and Web-based projects have been presented at sites such as the Museum of Modern Art, the Guggenheim Museum and in two Whitney Biennials. July wrote, directed and starred in her first feature-length film, Me and You and Everyone We Know (2005), which won a special jury prize at the Sundance Film Festival and four prizes at the Cannes Film Festival, including the Camera d’Or. Miranda July’s most recent film is The Future (2011), which she wrote, directed and stars in.

Her fiction has appeared in The Paris Review, Harper’s and The New Yorker; her collection of stories, No One Belongs Here More Than You (Scribner, 2007), won the Frank O’Connor International Short Story Award and has been published in 20 countries. Her latest book is It Chooses You (McSweeney’s, 2011).

July created the participatory website, www.learningtoloveyoumore.com, with artist Harrell Fletcher and a companion book, Learning to Love You More, was published in 2007 (Prestel); the work is now in collection of The San Francisco Museum of Modern Art. Eleven Heavy Things, an interactive sculpture garden she designed for the 2009 Venice Biennale, was on view in Union Square in New York in the summer of 2010 and is currently being presented by MOCA in Los Angeles. Raised in Berkeley, CA, she lives in Los Angeles.