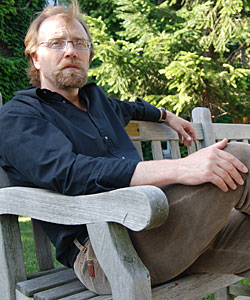 George Saunders is one of the most relevant (and funny) fictioneers and essayists of our time. He is a recipient of the MacArthur Foundation’s “Genius” Award, and he has appeared on “The Late Show with David Letterman,”“The Colbert Report” and “The Charlie Rose Show.” His satirical stories and nonfiction critiques of consumer culture appear regularly in The New Yorker, GQ and Harpers Magazine, and have appeared in the O’Henry, Best American Short Stories, Best Non-Required Reading and Best American Travel Writing anthologies. In 2001, Saunders was selected by Entertainment Weekly as one of the 100 top most creative people in entertainment and by The New Yorker in 2002 as one of the best writers 40 and under.

Saunders is the author of three collections of short stories: the bestselling Pastoralia, set against a warped, hilarious and terrifyingly recognizable American landscape; CivilWarLand in Bad Decline, a finalist for the PEN/Hemingway Award, and In Persuasion Nation, one of three finalists for the 2006 STORY Prize for best short story collection of the year. Pastoralia and CivilWarLand in Bad Decline were both New York Times Notable Books. Saunders is also the author of the novella-length illustrated fable, The Brief and Frightening Reign of Phil, which takes us into a profoundly strange country called Inner Horner, and the New York Times bestselling children’s book, The Very Persistent Gappers of Frip, illustrated by Lane Smith, which has also won major children’s literature prizes in Italy and the Netherlands.

Of his most recent book, The Braindead Megaphone, a collection of essays equally prescient as his fiction, Vanity Fair wrote, “Saunders’s bitingly clever and compassionate essays are a Mark Twain-style shot in the arm for Americans, an antidote to the dumbing down virus plaguing our country. Well, we live in hope.”

His stories have won the National Magazine Award for Fiction in 1994, 1996, 2000 and 2004 and the World Fantasy Award. He contributed the weekly column American Psyche to the Saturday magazine of The Guardian. Two of his works are in the process of becoming films, and his story “CivilWarLand in Bad Decline” is currently in development with Ben Stiller’s Company Red Hour Productions.

Raised on the south side of Chicago, Saunders has worked as a technical writer and geophysical engineer. He has also worked in Sumatra on an oil exploration geophysics crew, as a doorman in Beverly Hills, a roofer in Chicago, a convenience store clerk, a guitarist in a country-and-western band and a knuckle-puller in a West Texas slaughterhouse.

About The Braindead Megaphone (2007)

The breakout book from “the funniest writer in America.” George Saunders’s first foray into nonfiction is comprised of essays on literature, travel and politics. At the core of this unique collection are Saunders’s travel essays based on his trips to seek out the mysteries of the “Buddha Boy” of Nepal; to attempt to indulge in the extravagant pleasures of Dubai; and to join the exploits of the minutemen at the Mexican border. Saunders expertly navigates the works of Mark Twain, Kurt Vonnegut and Esther Forbes, and leads the reader across the rocky political landscape of modern America. Emblazoned with his trademark wit and singular vision, Saunders’s endeavor into the art of the essay is testament to his exceptional range and ability as a writer and thinker.

About The Brief and Frightening Reign of Phil (2005)

In a profoundly strange country called Inner Horner, large enough for only one resident at a time, citizens waiting to enter the country fall under the rule of the power-hungry and tyrannical Phil, setting off a chain of injustice and mass hysteria. An Animal Farm for the 21st century, this is an incendiary political satire of unprecedented imagination, spiky humor and cautionary appreciation for the hysteric in everyone.