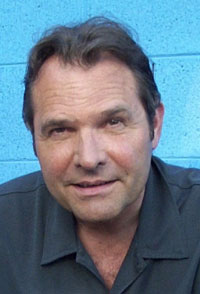 Denis Johnson is the author of five books of poetry, nine novels, a story collection, a nonfiction book and several plays. His novel Tree of Smoke was the 2007 winner of the National Book Award. Johnson’s short story collection Jesus' Son (1992) has a tremendous cult following and is widely regarded as one of the most important American short story collections of the past twenty years. Jesus’ Son was adapted into the 1999 film of the same name and named one of the top 10 films of the year by The New York Times, Los Angeles Times and Roger Ebert. Johnson has a cameo role in the film as a man who has been stabbed in the eye by his wife. Johnson's plays have been produced in San Francisco, Chicago, New York and Seattle. In addition to the National Book Award, he has received the National Poetry Series Award, a Guggenheim Fellowship, the Paris Review Aga Khan Prize for Fiction and he has been Resident Playwright of Campo Santo, the theater company at Intersection for the Arts in San Francisco. He lives in northern Idaho and Arizona.