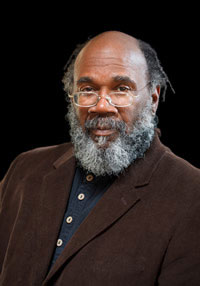 Arthur Flowers is a novelist, essayist and performance poet. A native of Memphis, TN, he is the author of novels Another Good Loving Blues and De Mojo Blues, a children’s book, Cleveland Lee’s Beale Street Band, a memoir/manifesto, Mojo Rising: Confessions of a 21st Century Conjureman and a graphic nonfiction, I See The Promise Land.

Flowers considers himself a contemporary griot, referring to the storytellers of ancient African societies who passed on the history of their people to future generations through the oral tradition. Using spellbinding "performance poetry," Flowers accompanies his presentations with African instruments.

He has published short stories and articles and is a blues-based performance poet. He is a founding member/director of New Renaissance Writers Guild, NYC; The Griot Shop, Memphis; and the Pan African Literary Forum. He has been executive director of the Harlem Writers Guild and recipient of NEA and NYSFA awards in fiction and nonfiction.

His novel in progress, Rest for the Weary, is a meditation on prophecy, destiny, fate and the human condition. He is also working on a nonfiction work, The Hoodoo Book of Flowers. He has a blog, Rootsblog, a cyberhoodoo Web space.

"There are those of us in African-American literature who feel that we are heirs to two literary traditions, the western written tradition and the African oral one, and try in the fusion to contribute something to the evolution of both."  — Arthur Flowers

[Return to Faculty and Residency Participants]