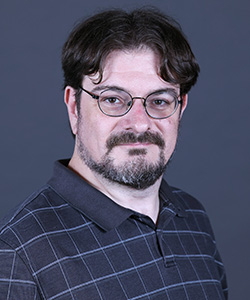 Ethan Deneault specializes in computational modeling of chemical processes that drive the formulation of presolar grains and interstellar dust. Through study of terrestrial meteorites, he searches for clues to the origins of the solar system and the galaxy's chemical evolution.

In addition to his other duties, Deneault provides leadership for the natural sciences and mathematics areas of the Spartan Studies general education program and can be reached at SSD-NSandMath@ut.edu.

With his undergraduate research assistant, Deneault most recently presented a poster at the 219th American Astronomical Society conference in  January 2012, "Carbon and Silicate Dust Condensation in Type II Supernovae," investigating the chemical kinetics of Silicon Carbide formation in supernovae.

Deneault's recent publication (Deneault, E~A.-N. "Aggregation of SiC-X Grains in Supernovae Ejecta." ApJ 705 (November 2009): 1215-1218) explored the ballistic motion of dust grains in supernovae ejecta which could lead to the formation of the isotopically-homogenous aggregate morphism of presolar SiC-X grains.

Deneault has been active as a member of the American Astronomical Society, and is member of the UT faculty senate. He is also an instructor for the Hillsborough Scholars Summer Academy, a summer STEM program for local middle school students.