The Fermans: “The First Family of UT”

Supporting the Ferman Center for the Arts is the latest example of the family’s impact over the last seven decades. 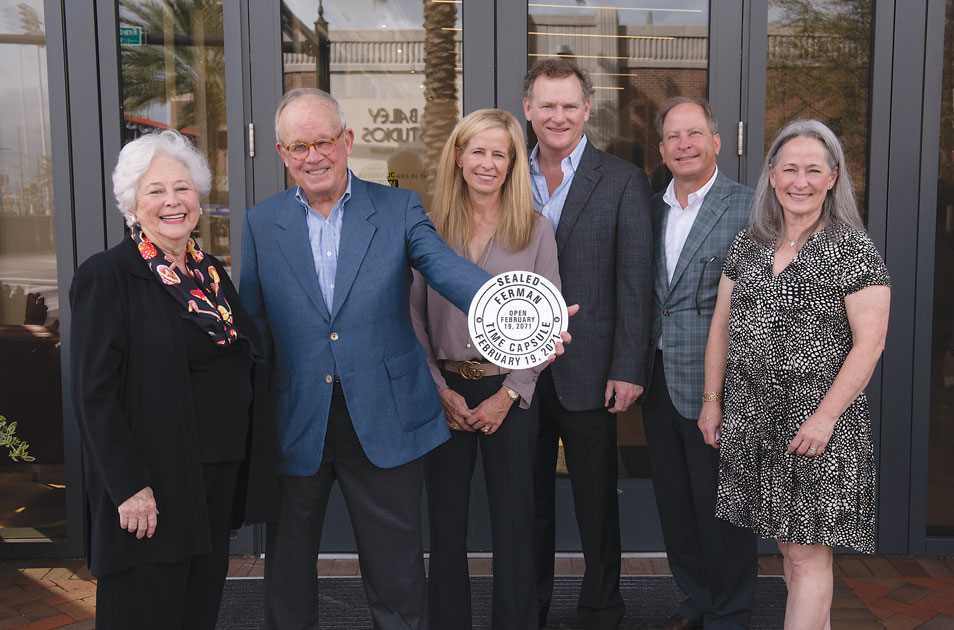 The Ferman family gathered for a ribbon-cutting event at the new building on Feb. 19.

The Ferman family’s involvement with The University of Tampa goes back more than 70 years, and if you’re wondering how deep the connection is, consider the following story.

When the late David Delo came to UT as president in the summer of 1958 and needed a place to live, the late James Ferman Sr. and the late Martha Ferman let Delo’s family use a house the Ferman family owned as a way to support the University. As it turned out, the Delo family lived there — rent-free — for 10 years.

This legacy of supporting UT continues today with the next generation of Ferman family members. Jim Ferman Jr., his wife, Celia, their daughters, Janice Straske and Laura Farrior, and their sons-in-law, Steve Straske and Preston Farrior, are the lead donors for the new Ferman Center for the Arts, a building that provides a world-class home for all of UT’s arts, music, dance and theater programs.

“If there were a title of ‘First Family of UT,’ it would certainly belong to the Ferman family for their longevity, loyalty and leadership,” says Ronald Vaughn, president of UT.

The Ferman family has run Ferman Motor Car Co., one of Tampa’s leading businesses, for more than 100 years. The roots of its auto business date back to 1895, when the late W. Fred Ferman, James Ferman Sr.’s father, started a company to rent bikes and buggies.

He secured one of the first Oldsmobile dealerships in the country in 1902, and the company now includes 11 dealerships around the Tampa Bay area, selling both domestic brands like Chevrolet, Ford and Chrysler, as well as vehicles from foreign manufacturers like Mini, BMW and Volvo.

As the business grew over the years, it also increased its support for the community, with UT being a key part of the picture. James Ferman Sr. joined UT’s Board of Trustees in 1949 and served as chair in the 1960s, and he and Martha were involved with the University for 50 years; in fact, Martha was one of the founding members of the Chiselers, a group that raises funds to support the preservation and upkeep of Plant Hall.

Decades ago, the couple made a sizable gift to the University that established the Ferman Music Center in one of the one-story fairgrounds buildings on campus.

He and Celia have been involved in scores of projects at the University over the years, but when they first heard from President Vaughn about plans for a new center for the arts on campus, they were particularly intrigued.

The Fermans had previously visited Washington and Lee University in Virginia, where both Janice and two of their granddaughters have attended. They had toured the school’s Lenfest Center for the Arts and were struck by the power of having all of a university’s arts programs in one location.

“When Ron proposed a center for the arts on the University campus, it definitely resonated,” he says. “A lead gift from Celia and me worked from an estate planning point of view, and our two daughters and sons-in-laws also made gifts toward the family’s total pledge.”

A love of music was passed down to Jim by his mother, who was a pianist, and that appreciation for the arts has translated into ongoing support for many arts and culture organizations in the Tampa Bay area. “If we are in a new city to visit, we are going to be much more likely to go to a museum than a tourist attraction,” Celia and Jim say.

WHAT PROMPTED THEIR GENEROSITY

Beyond family tradition, why are the Fermans so committed to UT, in a way that’s being passed down through multiple generations?

“There is no great American city without a great private university,” Jim says, “and community support of the University and of the arts is critical for success.”

Adds Janice Straske: “All of us who live and work in Tampa should support the institutions and organizations that make our community strong … UT makes Tampa better, so it makes sense for us to make sure that UT is great and can attract terrific students.”

Laura Farrior agrees: “It is so important for a local, family-owned business to give back to the community, especially with regard to education and the arts. This is where we all live and work, and we want to encourage and support higher education and balanced learning. UT is a perfect fit.”

A BUILDING IS BORN 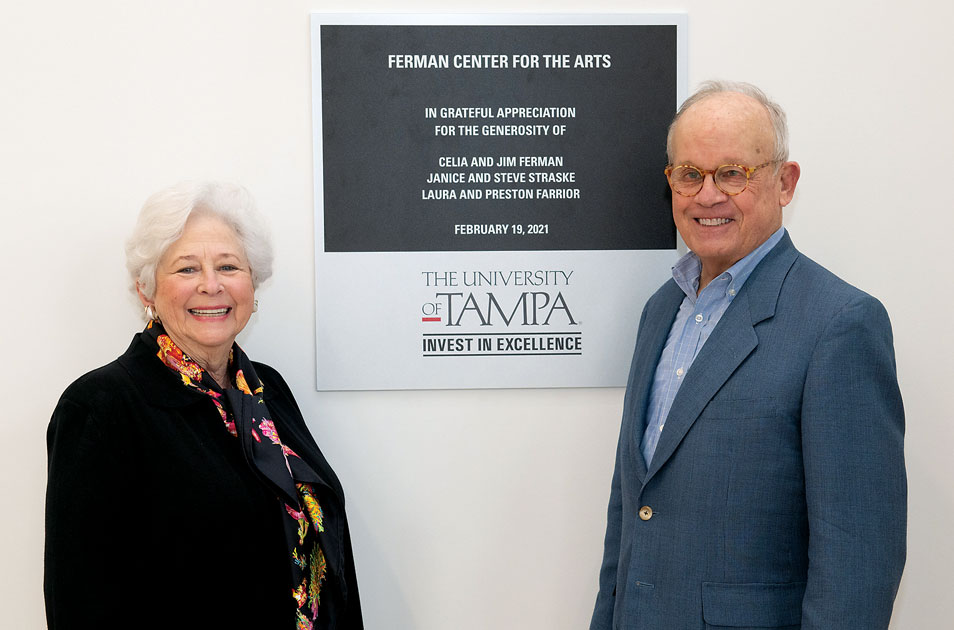 Celia and Jim Ferman Jr. stand in front of a plaque that bears the names of their family members.

The Ferman family has taken a tour of the new facility, and they’ve been impressed with the building’s architectural features and overall quality, and the thought given to such things as acoustical engineering and special touches like sound-deadening materials in the second-floor dance studio.

“The attention to detail given by Ron and the University staff and partners on every new building on campus is so impressive,” Celia and Jim say. “He has envisioned the growth of this campus in excruciating detail, and it’s been very rewarding to watch that vision become reality over the years.”

Of course, this growth could not happen without the support of philanthropists like the Ferman family making long-term commitments to the University.

Speaking to the family at the April 2019 groundbreaking for the center, President Vaughn summed it up: “We appreciate the legacy of the Ferman generations for helping us to realize this and other University dreams. Your leadership example will inspire others."